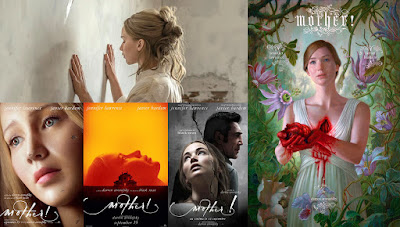 Warning: Yeah, I’m going to discuss most of this with “big spoilers” full on and right from the outset. If you don’t want to know then please don’t read.

Darren Aronofsky used to be one of my absolute favourite modern directors. The first three feature films he made blew me away. They were like a triumvirate of works of genius that repeatedly hit and engaged the brain on every level from the opening scenes through to the breathtaking finales. So yeah... Pi, Requiem For A Dream and The Fountain... three truly spectacular works. Even the director’s fourth feature, The Wrestler, was a pretty cool film. True, I couldn’t watch it more than once like I could his first three, which I would be happy to leave on repeat play throughout various stages of my life but, it was still a great film.

Unfortunately, Aronofsky starting mis-stepping, for me at any rate, with Black Swan (reviewed here), which I was so looking forward to and which managed to somehow underwhelm me on almost every level. And then he brought out Noah (reviewed here) which... honestly didn’t endear me to him and made me laugh when he decided to have giant rock creatures helping Noah fight off all the pesky humans who wanted to get on his ark. He might as well have had Transformers in there, to be honest.

And so we come to mother! which I thought had quite an interesting and edgy trailer but, after having been let down by this director twice in a row now... well, I really wasn’t holding my breath to go and see this thing. However, I then got wind of a critic (via 'Twitter buzz') who had called the movie something along the lines of “the most disgusting and depraved, vile film ever to be allowed in a movie theatre” with the clear warning that audiences should not go out to support this kind of thing. So, of course, my ears immediately pricked up and I was all full on about to going to see a movie that would provoke such an unequivocally negative response and I suspect the person who wrote that review did more to get people into cinemas to see this movie than the actual trailer campaign did. No publicity is bad publicity is something I’ve always, more or less, believed but with many films, such as this one, this is a case of bad publicity being hugely more preferable and influential than any positive press could be.

To be frank, though, having seen the movie myself now... if that reviewer genuinely felt like that about mother! then, honestly, he or she needs to get out and see some more films because there’s pretty much nothing here that hasn’t been seen before. It’s not really that impressive as a movie and certainly not going to disturb anybody but the most sensitive, 'wrapped in cotton wool' souls, I would have thought. Pseudo film reviewers who say such things should maybe get a life (and stop getting my hopes up that the film is a lot more vital to the art of the moving image than it actually is).

Okay... let’s get to the good stuff first, which won’t take long.

Jennifer Lawrence is someone I’m really getting the hang of lately. She is absolutely excellent in this role and, I would say, pretty much carries the movie on her lonesome. Javier Bardem, who I first saw in Jamon Jamon many years ago at the cinema, is an actor I’m not all that familiar with but he’s pretty great here, too, as a successful writer struggling to write new poetry. And both these titanic actors are ably supported by the likes of Ed Harris, Michelle Pfeiffer and Domhnall Gleeson... and, of course, they’re all great in this too.

Not only that but Aronofsky manages to take these pitch perfect performances and fashion a movie which, at the very least, engages some interest at the start and patiently renders his vision in a way that’s assured and leaves the audience in no misunderstanding about what is going on within the narrative... which could have got out of hand with so many of the crowded frames filled with noise, chaos and people, especially towards the last twenty minutes or so of the movie. Which really is no mean feat... Aronofsky knows how to craft a movie.

Here’s the thing, though. It’s one thing to be able to render your vision above and beyond the level of most of your contemporaries but... when the vision is a little lacking or simplistic, as I felt it was in this film, then it doesn’t matter how good you are technically, the film is not necessarily going strike true with an audience. Or at least hold their interest for the entire time.

The first thing he gets wrong here, from my perspective, is that he telegraphs the end of the movie right from the start and, once you kind of get the hang that the movie is probably somewhat cyclic in nature, it kind of becomes a dead give away that the whole thing is not necessarily to be taken on a ‘realistic’ level and that the film is merely a kind of metaphor for the creative process, with all the central characters merely prose within the writer’s wrestling imagination. And once you realise this, probably from sometime around the first half an hour, the inevitability of the nature of the ending becomes something you are just kind of hanging around to see when the characters will catch up with that concept. Of course, they never really do because, you know, they are just characters within the fiction of the fiction... um... if you see what I mean. They are the fabric of the creative process and it kind of becomes like there’s less at stake here than you might have, at first, thought.

The film is quite Buñuelian, in some ways and while I was watching the film I couldn’t help but thinking that the director had maybe seen the truly great The Exterminating Angel (reviewed here) a few more times than was good for him (which, it turns out, was a bit ‘on the nose’ because I just found out that Aronosfsky is listing it as one of his influences on the making of this film). The lunacy and chaos of the film feels like that mixed with the kind of freeform visual stream of consciousness of The Monkees’ movie Head and Fellini’s Otto E Mezzo (Eight and a Half) although, to be honest, I could watch all of those three films I just mentioned quite often whereas mother! is not something I’d ever need, or want, to bother to see again in my lifetime.

The continuous assault on the senses never really matches the madcap lunacy of, say, The Marx Brothers in Duck Soup (another film this might be said to superficially resemble at a genetic level) and instead maybe drifts off into the 1960s mainstream Hollywood, bloated and relatively less interesting hijinks of movies like What’s New Pussycat? (which I still have a slight, soft spot for, nonetheless) or the Peter Sellers vehicle, The Party. The resemblance is there, perhaps unintentionally and, like those kinds of Hollywood attempts at recapturing the madball antics of earlier generations, mother! kind of falls flat on its face in terms of continuing to engage interest after the, quite compelling, first half hour ...before the languid pacing and tranquil camerawork give way to handheld chaos and an almost reactive way of tracking the action.

So there you go. I didn’t really like mother! too much but it’s not in any way extreme or too disturbing like some of the word of mouth is suggesting. I think the film’s biggest problem is that, after a while, the constant pandemonium which the director is trying to bombard you with just gets a bit boring and you kind of can’t wait for it to end so you can get some peace and quiet. Which is a shame because, like I said before, I truly believe that Aronofsky was one of the great directors of modern cinema and I just wish he would be again. This film, though, feels a little like a diluted, ‘seen it all before’ kind of experience with a simplistic story and, alas, for me... that doesn’t quite tick all the boxes, I’m afraid. If you want to see what stunning work this director can really do then check out Pi or Requiem For A Dream. Those are the two movies that are really going to hook you.
Posted by NUTS4R2 at 13:36