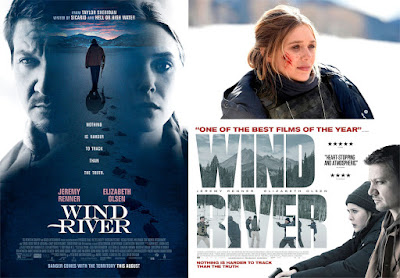 Warning: A very minor, structural spoiler on this one.

Well this is a terrific little film.

I wasn’t really that sure what Wind River was going to be like from the trailer but it looked like a high quality production and, yeah, that’s something it certainly is. I was personally more interested in the casting, more than anything. Ever since The Avengers: Age Of Ultron (reviewed here) I’d been kinda wondering how long it would be before somebody spotted just how good the chemistry was between Jeremy Renner’s Hawkeye character and Elisabeth Olsen’s Scarlet Witch character in that sequence in the middle of the final battle, where he lays everything out for her before she makes that decision and grows into the heroine she is supposed to be. Well somebody else other than me must have noticed it after all because here they are playing the two lead protagonists in a taut thriller which pitches them against both 'murder most foul' and the adverse, icy conditions of the Wind River Indian reservation, where this film is set.

After a brief prologue of a scene which is better explained in an autopsy room later in the picture, we get around about 15 - 20 minutes of the film just setting up Jeremy Renner’s character. He has an Indian ex-wife and a son and there’s something else which connects him spiritually (at least) to the events which follow and which I am not going to spoil for you here. He is a hunter/tracker for the reservation named Cory Lambert, working hand in hand with the police as he kills wolves and whatever else is killing livestock in the area. I have to admit I was torn with being asked to empathise with someone who goes around killing animals but I am not going to get into that debate now and Renner plays the character very well. The writer, who is also the director, is sensitive enough to not let it be too much of a problem for the audience, I think. As Renner is tracking a family of lions who have been killing off buffalo in the area, he comes across the dead body of the girl from the opening sequence and, after calling the local (and very small) police force in, the FBI are informed.

Enter Elisabeth Olsen’s character, FBI agent Jane Banner, the fish out of water who needs the help of Renner’s tracking skills to investigate various elements of the case as they come to light and who is quite unprepared for the weather conditions. She does, however, prove herself to be a dab hand with a pistol and, although she is the ‘green’ out of town character with the usual dynamic which that brings for the first 20 or so minutes of her screen time, she soon proves to be an edgy and resourceful person. And she’s all the local police have got to help them because, due to the way in which the first victim dies, the coroner cannot ‘officially’ reach a decision of homicide so she needs to wrap things up in a hurry before she is pulled out of there and back to her normal ‘hunting ground’ of Las Vegas.

That’s the basic set up and it’s a real humdinger of a movie, for sure. It actually utilises a lot of hand held camera throughout but it’s used to good effect without spoiling the sharp focused, languid style of the cinematography. Hectic during such scenes as running through a snowy forest and... just a little jittery and inquisitive to heighten tension when, for instance, Olsen is trying to secure a house without knowing who is inside and whether or not someone is going to try and shoot her to pieces around the next corner. This style of shooting can either kill a film stone dead if overused or really add to the weight of the story and this one, I’m glad to say, is definitely in the latter camp.

It’s not all moving camera though. There are some really nice static shot compositions here too and one of them was so well done, not what I’m used to seeing from a big budget movie made in the last ten years or so, that I was quite staggered. It’s a scene from the earlier part of the movie where Jeremy Renner is standing out on the porch of the father of the first murder victim, talking to him. He’s kind of half blocked off by a vertical wooden slat so he is in sharp profile in the left hand side of the screen. In the middle of the screen are some more verticals and diagonals and in the foreground, completely out of focus, is the guy he is talking to, also in profile to the right of the screen. So you have three vertical splits with the right of shot like a blurry after echo of the left. Which is all pretty cool but then the director further surprised me by showing just how much he knew about designing within this kind of widescreen format for the big screen, where a jolting cut could pop an audience right out of the action. The reverse shot is taken with the camera at such and angle that Renner’s head and shoulders takes up the same left hand third of the screen with the other actor still on the right... which is exactly how you make a seamless transition without unsettling an audience in a cinema where the contents of a huge, wide canvass is leading their collective eye at any stray movement or cut. It’s text book movie making and I was glad to see it so well executed here.

Although I had no idea who the killer was in this one before the reveal (it’s not that kind of film... the reveal here is the first time you meet the character) there was a point where, quite bizarrely as it happens, where I kinda second guessed the reveal of a certain shot... well I did and I didn’t. To explain, after a certain very intense scene involving a bunch of law officers and Elisabeth Olsen, she is knocking on the door of a trailer and you are almost expecting something to happen. Then you see the person inside the trailer getting up from bed and going to answer the knocking. For some reason, I just knew that when he opened the door I was not going to see Elisabeth Olsen on the other side of the door. I kinda guessed the director was going to pull a switch in the edit and that’s exactly what he did. Where I got it wrong, though, is that I was expecting it to be Renner on the other side of somebody else’s door when, instead, the director doesn’t displace the narrative spatially at all. He instead displaces the narrative in time and it’s here that we are privy to the scene which went on before the opening sequence of the film. That being said, it’s quite a good way to do it and it kinda beats Quentin Tarantino’s way of showing the exact same thing... that is, revealing the back story to an up and coming scene by flagging it up just before it becomes really important, as he did in The Hateful Eight (reviewed here) and as this director does here. It’s a nice little moment and the pay off when we finally do get back to Elisabeth Olsen knocking on that same door is... well, it’s a good one.

At the end of the film we have a scene where the inevitable happens... Renner’s character is a hunter/tracker and he finally catches up with his prey. The nature of the punishment that he metes out is not totally unexpected and, in its ‘poetic justice’ kind of way, it kind of reminded me a little of the way Mel Gibson conducted business at the end of the very first Mad Max movie (reviewed by me here). It’s not a million miles away from that and, after the final denouement, we have two epilogues which pick up some other pieces in the story and... it all goes down very well, to be honest.

The music for the film by Nick Cave and Warren Ellis (both of Nick Cave and the Bad Seeds fame) is quite supportive in places but did get a little too distracting in some moments. This is mainly in some passages where some lyrics are sang over the scoring and... well, I didn’t think too much of it when Hans Zimmer tried that in his score for The Amazing Spider-Man 2 (reviewed here... although that makes an awesome concert piece on it own) and I wasn’t too sure of it here. I might pick up the soundtrack CD at some point and see how it holds up as a stand alone listen but, when the vocals aren’t kicking in, it seems an appropriate and supportive score, on the whole.

All in all, Wind River is a pretty fun and quite suspenseful, tension filled thriller which shows just how good Renner and Olsen are together (and they are ably supported by a whole bunch of great actors) with a more leisurely pace than most modern movies today. Which, as far as I’m concerned, just shows how the director appreciates what a slower approach can bring to a movie when the action scenes are given that kind of setting, so they will really jolt the audience in contrast when... ‘stuff goes down’. It’s edgy, has some beautiful, snowy backdrops and it doesn’t once get boring or outstay its welcome. Definitely one to get to see this year if you are serious about seeing good movies when they come out at the cinema. A well made joy from start to finish.
Posted by NUTS4R2 at 18:09