Lady In The Water 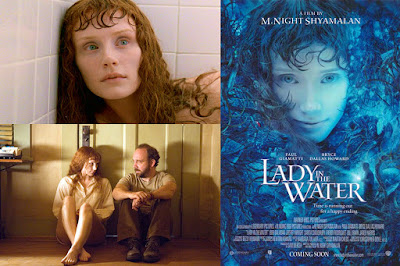 Wow. This is a pretty cool movie.

Regular readers of my blog will know that I have an ongoing and strange reaction to the films of M. Night Shyamalan. I try to see them because I always loved Unbreakable but, for the most part, I have found most of his films to be very obvious, unsurprising and disappointing. However, I almost always like the musical scores James Newton Howard composes for Shyamalan... a director who seems to bring out the absolute best in this composer. So I try to see these when I can.

Due to various issues with my life back in 2006, it wasn’t always easy to get to see the latest movies when they hit the cinema and, consequently, Lady In The Water was pretty much the only film by this director which I missed on the big screen. Because it got fairly bad word of mouth and was pretty much a box office failure, I could never really muster up the effort to get around to seeing this one. However, about a year ago I spotted a Blu Ray of the movie going for around £3 and figured I might as well finally get to it. After all, I really like the lead actor Paul Giamatti and, you know, there was that James Newton Howard score to hear within the context of the movie.

I was a little surprised, therefore, when... after a brief narration scene involving cartoon stick figures, giving us a potted background history of the fantasy creatures that are to be found in this tale... I found that the film has a charm and warmth far surpassing my expectations. Right from the outset, when we are introduced to the caretaker of a building, Cleveland Heep, played by Giamatti and the strange water nymph he finds in that building’s swimming pool... ‘Story’, played by Dallas Bryce Howard... I was hooked and wanting to find out just what was going to happen to these people.

Shyamalan’s almost invisible directing style provides us with a window on the many characters who inhabit Heep’s building, gradually introducing a truly amazing cast including Bob Balaban, Freddy Rodriguez, Jeffrey Wright and, of course, Shyamalan himself... who at this point in his career seemed to be writing himself bigger roles with every film he directed. As it happens, he’s pretty amazing in this too so... I can live with that.

Lady In The Water is based on a story M. Night Shyamalan made up to tell his children at bedtime and, as such, this film is a little more whimsical than you might expect from him... dealing, as it does, with water nymphs, their quest to ‘awaken’ a specific person in the world of man, the ferocious grass creatures who seek to stop this and kill said water nymphs and... other story elements which pull together as the film progresses. I don’t want to spoil this one for you so I’ll stop there with the plot details, suffice it to say that the film is about Heep and his quest to identify and slowly gather the necessary people from the tale so he can help Story fulfil her mission and return to her home while, at the same time, trying to protect her from her enemy. And it’s just great, in all honesty.

I’m not quite sure why this got such a bad reaction from people as it’s easily either my favourite or, perhaps, second favourite of this director’s works (although the score is Howard’s least interesting for Shyamalan, it has to be said). Maybe it’s because people are less able to buy into what amounts to almost a fairy tale of a story with adults fulfilling their specific purpose to make the laws of the fantasy world come to life. Or maybe it was just badly publicised by Warner Brothers... who knows? What I do know, though, is that I wish Shyamalan was still making films like this instead of some of the other territory he’s been moving into recently.

The really nice thing about this movie is that Bob Balaban’s character is a film and book critic. Therefore he knows everything about stories and Shyamalan is able to use this element he wrote into the character to slyly stick his tongue into his cheek by simultaneously having this guy deconstruct the elements of the film as they are playing out. It’s almost like he’s poking his tongue out at his critics (but not as a sign of affection in this case, as it might be considered by lovers) and saying to them, “Yeah, this movie is obvious and I know character A is bound to do this and character B will always do this but, actually, that’s not going to stop me from having my cake and eating it by having these characters do these things to move the story forward while I highlight that this is what they are doing anyway.” So it’s kind of cool and I think the last movie before this that I can remember pulling off such a level of self awareness while still using the clichéd elements of its genre rules to play out those very same things was the Stephen Sommers reboot of The Mummy series for Universal back in 1999. Lady In The Water has exactly the same kind of  level of reflexivity in it but it’s even more blatant and spelled out for the audience... and it still manages to get away with it.

Another thing I liked about this one is that there is no expectation of any kind of a twist ending like a great many of this director’s film have. That meant I could feel more relaxed watching it and, although the ending was pretty much a shoe in for the obvious conclusion, I really didn’t mind it and wasn’t in any way disappointed with the film’s denouement either. Which was nice.

All in all, I’d have to heftily recommend Lady In The Water to any of my friends who have a warm heart and like adult fairy tales. It is in no way deserving, in my opinion, of the rating it has on the famous Rotten Tomatoes website and I really don’t know why people are calling it contrived when it’s not something that the writer/director is really trying to hide about this work. So, if you’ve never seen an M. Night Shyamalan film and want to see a good one, check out this one because it’s an unquestionably warm and emotional movie. There aren’t that many of those being made these days, it would seem.
Posted by NUTS4R2 at 17:52