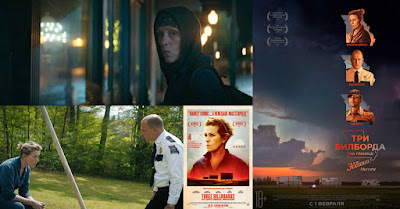 You know, I nearly didn’t bother with this movie.

I'd read on Twitter from a few people that the film was completely devoid of emotion and also, on the IMDB, that it was not much better than a TV movie. Well... I should have probably already remembered to not let the conclusions of people on Twitter, bad or good, be a factor in deciding whether I should go see a film or not... and in the case of Three Billboards Outside Ebbing, Missouri... well it’s a good reminder to always take what you read on the internet with a modicum of salt.

As it happens, this is one of those damn near perfect films that come along every once in a while. Consequently, this may be a somewhat short review because I don’t really have too much to say about it but let me press on for a minute or two here.

So the film’s inclusions in this years Oscar nominations were mostly another nail in the coffin for me because a film’s acceptance for a potential industry award is so often completely off the mark in regards to the organisers making value judgements on the year’s cinematic art that it's really not to be taken seriously. As it happens, though, Carter Burwell... who is a composer I feel is a bit hit and miss when it comes to effectively scoring a movie... was nominated for his contribution and so I thought I might as well go an hear what he had to offer. As it happens, though, the score is probably one of the least deserving of Oscar attention that I’ve heard and, if this is in this year’s awards then there’s definitely something wrong with the system here... although, to be fair, the fact that Wonder Woman (reviewed here), Professor Marston and the Wonder Women (reviewed here) and A Ghost Story (reviewed here) didn’t get nominated for at least 15 categories each proves that the whole Oscar thing is a joke... put together by people who just don’t seem to understand or appreciate the art of film. It’s all very strange.

However, for this reason I ended up in the cinema to see this thing and it really is a great little movie.

The film starts off with some fairly strong visuals showing us the three billboards from various angles and master shots to establish them as the defining motif of the film... one which we shall come back to, in terms of the shot content, time and time again. However, this is undercut with this totally rubbish song which started getting on my nerves from the very start and which is joined, at various places in the film, by various other irritating songs that almost managed to kill the scenes they were in... so there’s that.

We then join Frances McDormand’s character, Mildred, as she drives into town past the three billboards of the title, stops the car and then gets the idea to rent them out to poke the police who have kinda given up on solving the recent rape and murder of her daughter. This is what the film is about... the battles she faces keeping the billboards up and using them as a force to keep the police’s mind focused on her unsolved murder. However, this film is not a one trick pony of a movie, it turns out.

It’s a particular work of art which is populated by a very strong cast. Joining the always brilliant McDormand we have Sam Rockwell, Woody Harrelson, the underused, chameleon-like Caleb Landry Jones, Abbie Cornish and Peter Dinklage. They’re all fine actors and all brilliantly supported by a cast of character actors who are all as fine as they are. Despite comments I’ve seen, you would think that these performers, between them, could conjure up the necessary emotion and you’d not be wrong. It’s true, McDormand plays the character of the mother as a somewhat tough and muffled person but... she’s certainly not lacking in emotion and her turn here packs one hell of a wallop, I can tell you that.

I think what impressed me most about the film is that it’s not populated by black and white characters. The writing of the characters... and I’m not necessarily talking about the wonderful dialogue here but the way they are structured... is all very much portraying them in shades of grey. For example, one might say that there are two characters on the police force who could be seen as villains but, as you get to know them, you realise that its not that simple and they more than redeem themselves at certain points in the film, completely changing your perceptions of them. And it’s a similar situation with Mildred’s character... even though you are rooting for her the whole time, you can’t always say that she follows a good and righteous path to her ultimate destination and, by the end of the movie, you may not even be sure what that destination is supposed to be anymore. It’s phenomenal writing and that’s why you need these strong performers to handle the different shades of right and wrong which are inside every character.

The performances also help with the dialogue too. The comedy in this film is brilliant and, though it is a bit of a ‘movie review’ cliché to say this, there are scenes in this movie which will have you laughing your head off one minute and then stone cold sober the next. Such as a moment between a mother, an abusive ex-husband and their son turning from everyone being two seconds away from serious bodily harm to being tempered and turning back into comedy again with the stupidity of the ex-husband’s 19 year old girl friend accidentally diffusing the situation. This stuff requires a deft touch by everyone, I would guess (including the editor) and that’s exactly the kind of perfect attention to getting things exactly right that this film seems to possess in spades. You really don’t know how the characters are going to behave here and some of the drama, especially in a scene where Sam Rockwell’s character is on a phone while holding a shotgun, comes from the various characters never really knowing what is going through each other’s heads. It’s a big strength of the script and the way in which it’s shot. It also means the occasional, visceral violence that punctuates the story is entirely unexpected until various incidents happen. Which is a good thing.

Another thing that struck me was that the director sometimes opts to use shots that are very high in contrast... in that you’ll have a lot of dark and light in a shot. He’s not afraid to turn the lights off and use an outside source to pitch against the darkness, for example. Like when Mildred is reading a letter that Sheriff Willoughby ( played by Woody Harrelson) has left her and she is in a completely dark interior but the windows (she is nicely framed in one for this shot) are a contrasting light source which pitches her into silhouette.

Similarly, there is a scene later where one of the characters is reading a different letter from Willoughby, in a darkened room where he is not supposed to be, having let himself in at night. Because his back is to the windows, he doesn’t realise the building has been set ablaze by molotov cocktails until he is blown forwards by the last of five bottles. But while we watched him reading the letter, the light from the fire outside those windows is what gives the shot this similarly strong contrast and I couldn’t help but wonder if the director had used this kind of composition with strong areas of light and shade to provide a counterpoint to the complicated greyness of the characters. Probably not but it would be a nice thought if this probably serendipitous to and fro between the intricacies of the character’s internal, psychological make-up and the bold, simplicity of the shot design was a conscious decision.

Carter Burwell’s score is... serviceable when it’s not being undermined by needle-dropped songs on the soundtrack. It’s similar in melody to the terrific score he did for Carol (reviewed here) although it doesn’t... ahem... ‘homage’ Philip Glass in its constitution like that score did. Certainly, there were a lot more scores worthy of Oscar attention this year although, ironically, not many (if any) made it into the 2018 nominations list, it would seem.

And that’s me just about done on this movie. The film ends with something which, almost, leads onto a sequel but you know there’s no way you’d actually want to witness the possibilities implied as to what comes next. It is, however, a good ending and that’s another big win for the director here, as far as I’m concerned (I’ve not seen any of his other films so I’ve got no idea what he’s normally like). Three Billboards Outside Ebbing, Missouri is a phenomenal motion picture and I’m really glad I had the opportunity to still be able to catch it at a cinema. Definitely recommended for lovers of the art of film-making, for sure.
Posted by NUTS4R2 at 19:53