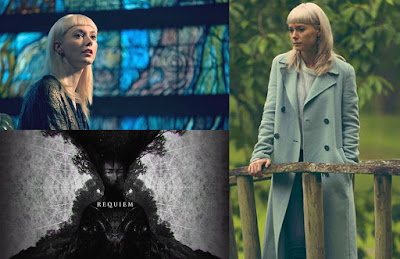 The Cello-ship Of The Thing

I don’t often watch TV shows if I can help it...

There are a few special ones, sure... but, on the whole, they tend to divert too much time away from my blog for too little return in terms of reviews to be published. However, I do occasionally make an exception and, in this case, it was as a result of a review on the internet which highlighted that this was actually a horror show (a rare thing for modern day BBC)  and the reviewer seemed quite enthusiastic about it. He even singled out the musical score by Dominik Scherrer (with Natasha Khan) as being... well... more than something to write home about so, obviously, I needed to have a look at this one. In truth, it had sold me on the idea because I well remember some of the outstanding horror themed TV shows of the past such as the Quatermass serials, Sapphire & Steel and The Omega Factor and I just, somehow, assumed this one would be an echo to the kind of quality of writing and production that the various stations used to put into these things back in the day.

Alas... that’s not quite the case here.

Now, if you only watched the very first episode of Requiem, I can understand why you’d probably be put off from watching another. Episode One is particularly dreadful on a number of counts. For instance, the main character, internationally famous cello sensation Matilda Gray, played by Lydia Wilson, seems a bit inconsistent as a cellist when you compare what her hands are doing when they cut from a long shot to close up and back again. Not much continuity in tempo there, I can tell you. Also, when one of the characters slashes their throat right in front of Matilda, I found it a bit hard to swallow when I realised that the dead character’s eyes kept looking around in at least two of the shots. Seriously, if the actress couldn’t hold the pose then just don’t let the footage run that long.

Both of these things in themselves could be overlooked but the main problem here is that the ‘timing’ of the horror elements in this particular episode is appallingly ineffective. I would have thought they’d have saved the definitive presence of an unseen terror at least until the end of the first one, to be honest but, the abundant appearances of ‘ghostly spirits’ and badly timed set pieces does nothing to hold the atmosphere, it has to be said. Worse than that, the identity of the person who Matilda and her musical sidekick Hal Fine (as portrayed kind of interestingly by Joel Fry here) try to find when they take a ‘time out’ to investigate shenanigans which might make sense of the bizarre death I mentioned earlier, is pretty obvious to work out once you are about twenty minutes into the first episode. Blindingly obvious.

So why did I bother watching all six, you might ask?

Well, I very nearly didn’t but I was impressed that the identity of the person I mentioned above was not held until the last episode but was, in fact, revealed at the end of the first. That meant they had to be going somewhere else with the storyline and so I thought I might as well watch the next one to see what happens next.

Thankfully, the second episode is a heck of a lot better than the first and the ghostly shenanigans are pretty much put on hold until the end of the episode. This pretty much enables the writers and performers time to build up a certain amount of intrigue and atmosphere so, by the end of the second one, I was much more into the whole thing. Although, the series doesn’t quite sustain that standard right the way through to the end, it has to be said.

Now, there is some nice stuff in here such as some excellent sound design and the odd shot where the framing looks well designed to take advantage of the placement of the characters within their environment. However, there’s still a lot of bad stuff too.

For instance, the main protagonist is someone I found I could find no sympathy for at all. Most of the time she comes across as a selfish, entitled youngster who is used to always having her own way and seems intent to ignore the people around her who actually care about her and want her to succeed. Now that may, on reflection, have been the whole point of the way that character was written and played (going by something one of the characters reveals in the last episode) but, if that was the case, it certainly didn’t do me any favours. I was far more interested in the exploits of the local bar maid, played by Sian Reese-Williams and her developing relationship with Hal or the adventures of the local police sergeant played by Clare Calbraith, than I was the main protagonist. I really didn’t care what happened to Matilda by the end of the show and I guess that’s possibly a problem for this kind of story.

The other thing was that, for a TV show trying to be, presumably, a cutting edge horror tale which is broadcast after the watershed, I found the levels of nudity compared to their necessity in certain scenes preposterously low during the moments which were obviously written to exploit such things. The BBC iPlayer made a point of warning me that 'the following show' had ‘upsetting scenes’ and ‘sexual situations’ and... well I think that’s false advertising, to a certain degree. I can never figure out how you can take a series shots of a naked lady in a shower and still manage to not show much of her body. If you don’t want to show her body then... hey, that’s fair enough... but then why set the scene in a shower in the first place? It wasn’t necessary.

Similarly, I’m all for having sex scenes in a show but why the heck, when the bedsheets are flung back after an evening of frantic lovemaking, would you reveal that the heroine of the piece still has her bra on? How unreal and harmful to the pseudo-reality of the story is that? I mean who actually behaves this way in real life? Unbelievable.

So, yeah, there are some problems with the show but I did find that for four of the episodes... numbered two to five... I was sufficiently hooked and intrigued to say that I really enjoyed it a lot. And, yes, that original review I read was right... the music is pretty good and I would certainly grab a copy if a CD soundtrack was released of this one.

Unfortunately, I’d have to say that the series was unable to sustain the levels of intrigue for the sixth and final episode which is, if I’m honest, as much of a mess as the first one was. I quite liked that some things which seemed a little like loose ends were the writers trying to be subtle and allowing the audience to fill in the blanks by themselves but, one of the scenes towards the end actually undercuts the lack of bloodletting you know is coming by having a quick, abstract shot in flashback followed by, a short while after, a shot of four shallow graves including an arm sticking out with a watch that really does try and spell things out for the audience in the least engaging way possible. I mean, if you were going to allude to what the fate of some of the characters was going to be, withhold a certain event and then show us anyway, you might have been a lot better off just showing us what occurred in the first place.

Also, it has to be said that the final fate of the main protagonist, Matilda, is pretty obvious once you get to a certain point here and so the various epilogue scenes seemed quite redundant and you are just waiting for the writer and director to spell it all out again... just in case you hadn’t already worked it out (while I would have said that it was almost impossible not to figure it all out in advance). The show starts going ‘The Full Wheatley’ (Dennis, that is) from the second episode in so you can pretty much work out where all this is going. So what we have is an unsatisfying ending which wasn’t exactly unexpected and which will probably leave most fans of the horror genre a little unsatisfied, truth be told.

At the end of the day, I’m kind of half glad I watched this one because four of the six episodes were at least interesting but, in all honesty, I don’t think I could recommend this one to most people... especially if they are horror fans. There are a lot better genre exercises than this out there and, maybe this one is a little bit of a time suck that a lot of people wouldn’t need. Which is not, I promise you, what I was hoping to write about Requiem.
Posted by NUTS4R2 at 18:19