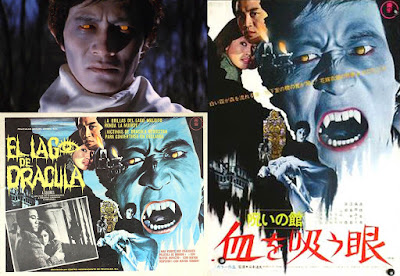 So here we have Lake Of Dracula, which is the second, tentative, entry into what is nowadays being called The Bloodthirsty Trilogy on the recent Arrow films release. Again, a bit of a misnomer because the films really don’t have a lot of blood in them, at least the first two films don’t (I’ve yet to see the third one but plan on getting to it before this review is published). So, barring the occasional blob of blood on the mouth of an undead creature of the night or dog, don’t expect too much in the way of goriness from this one until you get to the final sequence here which, even compared to the previous movie The Vampire Doll (reviewed here), is not really in any way gruesome, it has to be said.

This film stars Midori Fujita as Akiko, the films main female protagonist. We see her character first as a little girl in a pre-credits sequence which is referred to for most of the rest of the film as the recurring dream this character has in real life. After her dog Leo escapes her, she finds him in a ‘vampire house’ but we don’t find out what happened to her when she goes in here until the finale of the film, more or less. However, after the credits finish we find her some... I dunno... maybe twenty years later, living with her sister Natsuko, played by Sanae Emi. They live right by Lake Fujimi which, I’d like to say is the Lake Of Dracula but... there are some things which stop me from making that connection, it has to be said. For a start, it turns out that the lead vampire harkens from Akiko’s home town which is a coastal town and not by a lake. And though he has his coffin delivered to Akiko’s new locality decades later, the lake has no real tie in to the story in any way, it has to be said.

Another reason why I’m hesitant to call this place the Lake Of Dracula is because, like the previous movie, Dracula isn’t actually in it. He gets a mention at least once in the English subtitles but he’s nowhere to be seen. At least, though, the unnamed vampire character is actually a true vampire this time, unlike the character in The Vampire Doll, around which there seemed to be a fair bit of doubt. There’s also a bit of back story to his character which does, at least, suggest that he is the great grandson of Dracula so, you know, that’s something. Perhaps ‘Dracula’s Heir’ may have been a better title.

Anyway, after his coffin arrives and the locality suffers some sinister, vampiric goings on, it’s up to Akiko and her doctor fiance Takashi, played by Chôei Takahashi, to investigate the unexplained shenanigans and get to the truth of her connection to the vampire. And also find out why her sister is suddenly acting so strangely, too. Actually, the fact that she begins wearing a scarf half way through the movie after she starts acting as sinisterly as she was sisterly should be a dead giveaway, I’d have thought, that she is hiding fang marks. As would be the fact that her face seems to be several shades paler than usual after a certain point in the movie but, hey, what do I know about siblings?

The vampire himself looks very good and he is played here by Shin Kishida, who was apparently quite often cast for his sinister looks. Readers may recognise him for his excursions in other famous Japanese movies including roles in entries in the Zatoichi, Lone Wolf and Cub, Hanzo The Razor and Godzilla movies... not to mention the Zatoichi TV show. He doesn’t have a lot to do in this film, to be sure but he does look good and wears a long white scarf to offset his dark clothing, making him look the very height of vampire fashion in most of his scenes. Neil Tennant wears a very similar costume in the Pet Shop Boys movie It Couldn’t Happen Here (reviewed here) and I wonder if he caught this film back in the days when he used to go to Scala screenings.

The film looks as good as the last one, with the director slicing the screen up a lot into slats and placing his characters into situations where natural or often unnatural (this is a movie after all... everything is as controlled as you can get it) verticals and horizontals box them into their own area of the screen. He also does something a few times which gives me pause to think in that, sometimes, when all the characters have exited the screen, he will choose to hold the shot for a couple of seconds with nothing else going on. Not sure why he does that but it isn’t jarring in any way and doesn’t detract from the pacing too much.

Okay, so lets talk about the dog. I’m firmly convinced that the film-makers threw the ‘dream’ angle in there for a bit... before it’s confirmed as a true memory and not a dream... to stop the audience realising something is very wrong with Leo the dog. When he runs away at the start of the film he definitely seems to be a different breed of dog to what he eventually grows up to be. Which is pretty strange casting if you ask me. Also, the fact that this dog must be over 20 makes no sense as it’s still running about everywhere and getting into trouble... I would say the ‘grown up’ version of Leo is no older than 10 so... yeah, it’s a pretty tenuous version of doggy reality/continuity if you ask me. Maybe Leo always wanted to be some kind of Alsatian when he grew up. Who knows?

This does seem to be one of those films where, as brilliant as the technical stuff is, there’s always something really silly going on in the main narrative content to counter the remarkable achievements of the crew. For example, there’s a fight sequence in the car where Takashi has a fist fight with this film’s version of a kind of Renfield character... as in a character who has been vamped up to serve his new master. It goes on for a while and takes place completely in the car with a lot of juddery, handheld camera work... and it must have been a really tough thing to shoot. I have no idea how the cameraman was able to get in there with them and keep himself out of the way of the action... but it’s pretty good stuff.

However, as I said... lots of silly stuff too. For instance, when Akiko and Takashi are reading the notebooks of the completely non-vampiric but dead father of the film’s lead vampire... they get to a point where his narrative voice stops because our two heroes are discovered and cornered in the room they are reading this from by the vampire himself. However, the vampire carries on the narrative on the back story for them at the exact moment that they left off reading. Seriously, how does that happen? How would he know which part of the story the inner voice of these two characters had gotten too? Makes absolutely no sense.

So there you have it. All said and done though, I really enjoyed this one almost as much as the previous as it gives off that kind of Hammer meets Amicus meets AIP kind of vibe which the first one had in spades. As does the musical score. Lake Of Dracula is a minor vampire film but fans of the conventions of the genre should be happy enough with this, is my guess. Grab it while you can and fangs me later.
Posted by NUTS4R2 at 14:03