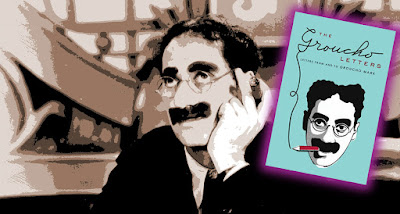 A good friend gave me this fine edition of The Groucho Letters and, having read and laughed along with the witticisms of Julius (Groucho) Marx, I thought I’d write a short review of the tome in question here.

The book opens with an introduction which explains, quite rightly, that this is as much a volume of letters to Groucho as it is from him and that the various ladies and gentlemen in question, putting ink onto paper as a friendly assault on Groucho’s mail box, say as much about him as they do about them. Or rather, when one is writing a letter to the person who was, in his lifetime and probably still is, arguably the foremost wit of the generation, one tends to write ‘up to’ and be as witty as you can in response to his mental acumen. I guess this is what’s known as acumen cleaning. Pardon me while I go grab a hoover.

For example, American humorist Goodman Ace, when talking of a show he’s doing on television, writes to Groucho that...

“However, it is our latest medium - we call it a medium because nothing’s well done.”

Which is about as good a piece of witty satire about the TV business as you’re likely to find and something that, often, is sadly missing in this day and age. The day precedes the age chronologically but not alphabetically.

The book is arranged as person to person sub-sections, aka Groucho writing to and receiving from that person, within overall bounding sections. There are ten sections in all including such collective titles as Movie Business, Private Life and Short Shrift... and these are set in little chronologies for each person in a specific subject area. What this means is that while you get little mini chronologies within each section (and many correspondents reappear in various sections), you don’t get an overall chronological picture at all in terms of the body of letters as a whole. To be fair, it’s kind of a ‘lesser of two evils’ approach as either way of arranging these things has their advantages and disadvantages, to be sure.

All in all, though, I’d say the letters all range from around the late 1940s, when the last two genuine Marx Brothers films were being shot, at the tail end of their career (although Groucho would have a long and varied career on stage, radio and TV shows far beyond these and into the next two decades) up until around the mid 1960s.

The book starts off with a brilliantly nonsensical tirade of letters both from and to the lawyers at Warner Brothers, who are writing to Groucho to ‘cease and desist’ from making the 1946 movie, A Night In Casablanca. They wanted to know the plot details because they are worried that people will easily confuse this with their 1942 classic Casablanca. Honestly, if you are remotely familiar with just what you would be getting with a Marx Brothers movie, you wouldn’t have been worried... but I guess they were concerned that the film was going to be a satire or parody of the Warner Brothers film. So Groucho starts feeding them a series of completely ridiculous and ever changing, made up plots, the likes of which would never, in reality, be allowed to see the light of day in any coherent movie anyway, I should think. As the legal team repeatedly admit that they fail to grasp how Groucho’s set of responses to their requests actually answers or clarifies anything, you can feel them losing a grip on the situation and, towards the end of the correspondance, you kind of feel they are just going to wring their hands in despair and give up. I’m really not sure how that story ended but, of course, the film was made and A Night In Casablanca was the last film in which the brothers appeared on screen at cinemas in the same scenes (their swan song, Love Happy, is mostly a Chico and Harpo partnership movie and Groucho’s scenes are shot separately).

It’s at this point that I should warn readers of a certain age that a lot of the jokes, observations and events that Mr. Marx refers to in his letters are, in some ways, lost to the generations. I’m 52 now and I still didn’t understand all the references. I’m hoping there are people out there who still do and some of it you can research yourself but I’m sad for the continual loss of knowledge of absolutely anything ‘of its time’ as the years go by.

However, if you get a bone you can sometimes follow up the clue and learn something. For instance, a letter from Groucho briefly eluding to a worrying sounding incident with ‘Wanger’ has absolutely no context in this book. But then I remembered the name Walter Wanger as being a producer on one of my favourite sci-fi horror movies, Invasion Of The Bodysnatchers. So I looked him up and cross referenced when the letter was written and it turns out that Walter Wanger shot an agent in the leg and groin who he thought was having an affair with his wife, Joan Bennett, at one point in his career (he served four months for his trouble). So yeah, a quick bit of research shows that, like everything, there’s a wealth of information to be extrapolated from such epistles if one only has the time to research.

Another thing I learned was that, during the revival of one of his movies at the theatre in 1965, he sang Hooray For Captain Spaulding live on stage and then replicated as scene from Animal Crackers with his original leading lady, Margaret Dumont. As he tells one of his friends, the lady died two days later... her last performance was with him.

Although he had quite a bit of money coming in, as opposed to, say, Chico, whose gambling debts convinced the other two to go ahead on shoots for A Night In Casablanca and Love Happy, Groucho seems quite humble in the way he looked at his life and it comes through in some of his writing. For instance, when talking about a play he was doing in 1957...

“But when you play to a free audience all year, it’s good for the ego to know there are people willing to part with five smackers to see you “live” (and when I say “live” I mean as live as a man can be at my age).”

And I mean generous with his time. Once, when he discovered that Martin and Lewis were not getting on anymore and he was worried for their friendship and, also, their lucrative movie partnership, he sent each a letter giving them some advice for staying in such a situation when the creative art is compromised by the stagnation of long term partnership. I don’t know how Dino reacted but Jerry Lewis certainly appreciated the time and advice that Groucho wrote to him and remained a correspondent for many years after. I don’t know how effective the advice was but I know the Martin and Lewis cinematic partnership didn’t dissolve for another couple of years so, maybe Groucho helped keep their spirits afloat a little while longer? I’d like to think so, anyway.

So yeah, I’m not going to ramble on about this one for any longer. Suffice it to say that anything written by Groucho Marx (and in this case, the people who he chose to correspond with), is going to be of value to the history of show business and certainly will be of importance to any fan of Groucho and his equally famous brothers. So The Groucho Letters is definitely worth a read if you fall into that category for sure. Just don't fall into an open manhole, to paraphrase the great man himself.
Posted by NUTS4R2 at 16:41