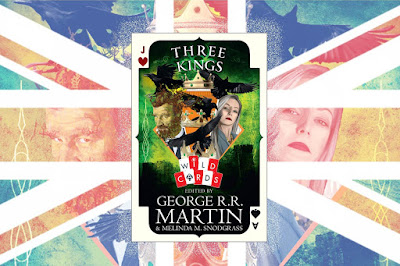 Three Kings is the 28th in the Wild Cards series of mosaic novels which have been going since the 1980s. This one is the second of the British interlocking viewpoints into the Wild Cards saga, following on directly from the various stories in the previous volume, Knaves Over Queens (which I reviewed here). Pop into my book index and you’ll see all the more recent novels, from the last ten years, have been reviewed here so if you want to get a flavour of what the Wild Card universe consists of, then you should maybe have a look at one of those earlier reviews before diving in here.

So, I said in my last review that I thought the new UK series, while excellent, had rather shot its bolt by having so many decades rushed through in one volume. So yeah, this one is set square bang in a few weeks ranging from February to March 2020... finishing literally before a real life virus shut down the nation. Coronavirus is, unsurprisingly, not mentioned here in any form and, since this is an alternate reality anyway, it doesn’t need to be. Something tells me though that, had the writers known just what would be going on in the world right now, they would have slipped some sly references in.

That being said, there are parallels to things happening right now as this particular story deals with rioting on the streets as the Twisted Fists (still headed by The Green Man from the previous story), Britain First and other factions fight in the streets as rioting breaks out at some point over the monarchy and who will be on the throne at the end of the story.

This one starts off with the dying Queen Margaret (Elisabeth drew the Black Queen and died from the Wild Cards virus before ever taking the throne, back in the 1940s) who entrusts Alan Turing, the Ace known as Enigma, to search back through the records to find her Joker offspring, abandoned at birth, as she fears both her sons, Richard and Henry The Ninth (as he becomes for a while) are incapable of taking over from her competently. And so is set in motion a chain of events involving Turing, Richard, The Green Man, Noel/Lilith, Constance the Ace fashion designer (still making protective clothing for the new monarchy, much to her anger) and one or two other players including, of course, the evil Irish crow Goddess Badb who is pretty successfully manipulating everything, unknown to all the others, in the hopes that she can turn Great Britain into a bloodbath of heroic proportions.

And like pretty much any of the Wild Card books you’d care to grab over the years, this one is a great, fast paced yarn full of pathos, drama, action and, as it happens, the death of at least one regular character (or more, I’m not going to tell you). This one is also one of the less fragmented of the mosaic novels. Unlike the last volume, which fit together various stand alone stories, this one is taken bit by bit from multiple viewpoints of specific characters and locks together as a quite seamless story. What this means is that you have specific goals and character motivations which you can focus on and watch (or read, I guess) play out as an arc over the whole story, rather than having lots of mini climaxes throughout.

It goes without saying, at least in the Wild Cards novels, that you care for each and all of the characters... except for the villains of the piece, obviously. Even though the pacing on this is terrific and the stakes are high (at least on a national level, it’s nothing compared to some of the threats faced in the Wild Cards universe which, quite recently, nearly saw the destruction of the world), it still manages to explore the subtleties and worries of the main characters in a way that will have you investing in their well-being from the start and, of course, that means the narrative can really punch you in the gut when each and every twist or death is just around the next corner.

In terms of its space within the engulfing Wild Cards shared universe, there really aren't that many links to the more US or global based novels in the series and there’s not even a Croyd Crenson sighting or much of anything about what’s been going on in the world since it almost ended in High Stakes (which I reviewed here). You won’t miss that though because there’s so much going on while the Knights Of The Silver Helix (as the Ace division of the British Secret Service are known) are trying to find any information at all which has been buried in the past about a possible heir to the throne before the Joker-hating Henry the Ninth gets properly bedded into the throne and his supporters take to the streets to attack the least fortunate heirs of the Wild Card virus.

There are shifts in allegiance for some of the characters here, as Aces switch sides or are asked to do things which go against their role in the grand scheme of things. And, of course, there are many sacrifices along the way, not just the loss of life but various acts of betrayal and redemption as the clash of the cold war meeting terrorist organisations like the Twisted Fists (technically) forces people into situations and actions which might seem unthinkable to them in lighter times.

And that’s all I’ve got to say about Three Kings... I’m not going to go into too many details here but I will say that, while there is a sense of resolution to things as they are, there are also some characters that I really hope they don’t leave behind. What I’m saying is... I hope this is another of the mini trilogys that pop up from time to time in the Wild Cards universe. I need to know what becomes of the relationship between Constance and Bobbin, for starters. And Alan Turing’s arc seems a little unresolved too, I would say. So I hope the next volume in the series is published sooner rather than later. These characters come alive so well on the page it would be a shame to lose them just yet, even though most of the main players in this one are in their seventies or over. As usual I will end this by saying that, if you’re a loyal reader of the Wild Cards books, Three Kings is an absolute winner. If you’re not that familiar with them though, this is really not a good jumping on point and you should maybe consider reading them in publication order.
Posted by NUTS4R2 at 17:07