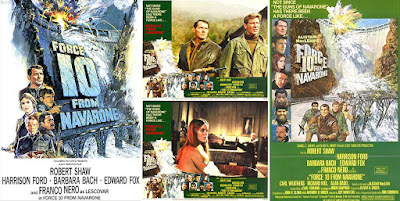 May The Force
Be With You

As a rule, I’m not the biggest fan of war films (at least not terrestrial based ones). I’m not particularly worried that a lot of them make light of the war and are usually fun filled shoot ‘em ups which amount to not much more than Boy’s Own stories. Heck, even the serious and more conscientious ones have a certain degree of that to them. I just don’t like them all that much and can probably count on the fingers of one hand the ones I do enjoy (I even have a few I haven’t seen yet in my ‘to watch’ pile, courtesy of director Sam Fuller). That being said, Force 10 From Navarone is one of those films which I like above and beyond my ability to explain why although, when I first saw it on the television back in the 1980s (I don’t remember catching this one at the cinema... but I might be wrong on that count), the main draw would have been the inclusion of Harrison Ford in the cast, whose star was about to rise to meteoric proportions thanks to films like The Empire Strikes Back (reviewed here), Raiders Of The Lost Ark and Blade Runner (reviewed by me here).

The film is actually a sequel to a classic war film made 17 years before, The Guns Of Navarone, which I had seen a couple of times in my childhood but it never really struck a chord with me (although, if I watched it now, I’d probably find it’s a masterpiece). This one did though and... now that the fabulous Indicator label have given us a new Blu Ray transfer of, not just the theatrical cut but also the extended edition, nicely packaged with a bound book about the production, some stills from the film and a gazillion extras all in a nice slip case for a surprisingly low cost (in this day of overpriced limited editions)... I couldn’t wait to re-watch it again after all those years. I wasn’t disappointed although, truth be told, there’s not a heck of a lot that special about the movie either.

After an opening recap of the first film’s ending, with the guns of Navarone being destroyed by explosives (and with the original cast kept out of camera), we hitch up with two of the main characters from that film but, instead of being played by Gregory Peck and David Niven, they are replaced by Robert Shaw and Edward Fox. Now, the original plan was to have the cast back from the first movie, which was to be made soon after but, since there was a large gap as pre-production flailed then failed, they were too old to play the roles again by the time the film finally made its way into production and so we have, in some ways, a poor man’s cast replacement... although Shaw and Fox are obviously great actors in their own right. Here they team up with Harrison Ford’s ‘Force 10 Squad’, to get dropped off enroute on his mission in order to identify and kill a traitorous character from the first movie, who is played here by Franco Nero. The film’s main cast are rounded out by Barbara Bach and Richard Kiel, who were both, presumably, relatively fresh off the set of The Spy Who Loved Me (reviewed here) and who would soon be making the Italian sci-fi film The Humanoid together. So three major Bond actors along with a couple of other minor Bond character actors in the cast, not to mention the film being directed by Guy Hamilton... who directed three of the Bond movies too.

Okay, so, as soon as their plane is shot down and their numbers are thinned out, the film becomes a proper adventure romp, with various shoot outs and explosions, as the main players join forces properly to help complete each other’s missions and save the day... which they do but, not necessarily in the way they thought they would.

If anything, the thing that struck me about watching the movie this time around was the way the suspense sequences were milked for every drop, such as the parachuted Edward Fox being rescued by another main member of the team played by Carl Weathers (that’s Appollo Creed to you) as he gets stuck in a tree and dangles above a German soldiers head... you know the kind of thing. This film is full of it and it’s also weighted with a lot of dramatic moments devised to second guess the audience which, over the years, dates it maybe a little. Such as characters revealed that aren’t dead after all and various ‘deus ex machina’ rescues from an unexpected (ish) source just at the last second. That being said, clichéd as the movie is, it’s all done with a tremendous sense of fun and I couldn’t help but be thoroughly entertained by it once again. Especially when you throw in Ron Goodwin, the composer of such famous military scores as 633 Squadron, The Battle Of Britain and Where Eagles Dare (among others), providing a strong march and incidental music which, as far as I’m concerned, is certainly one of his most whistleable scores. This one’s been heard issuing shrilly from my lips on many occasions over the years, I can tell you that.

Indicator’s new release is amazing and includes a number of extras, one of the highlights of which is a 20 minutes plus look at the huge differences between the Theatrical and Extended cuts... both of which contain various things not in the other version. This valuable extra shows you things like the vast differences in the opening narration, the completely different title sequences, the various lines which have been re-dubbed and added or subtracted in each version (I think the extended version is a little more family friendly, too, when it comes to alternate dialogue), the difference in the sound design in certain scenes (details like the sounds of birds and insects either timed differently or absent in one cut or the other) and even the absence of music in certain places in one of the cuts. One of those extras which really is worth having.

Another extra which is worth the cost of admission, although I’ve only watched the first ten minutes or so at time of writing this, is an hour and a half archival interview with the composer from the 1990s, which absolutely transports you back to his time growing up in the 40s and 50s, from what I’ve heard of it so far.

So, yeah, not much more to add on this except, Force 10 From Navarone has absolutely nothing to do with Navarone (Alistair McLean’s original and much different sequel novel may well have more to do with the first one) but it’s certainly an enjoyable movie and this new limited edition Indicator Blu Ray set is absolutely the best way to see it outside of a cinema presentation. One I’ll no doubt be dipping into again at some point in the next ten years or so and certainly value for money. I’m absolutely delighted to be reacquainted with this old friend again, no matter how corny some of the dialogue and situations are. A welcome return to the home video format.
Posted by NUTS4R2 at 16:34