The Complete Adventures Of Judith Lee 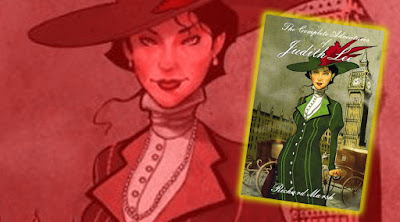 Warning: Some light spoilers reside within.

Richard Marsh is probably familiar to most people as the author behind the hugely popular supernatural thriller The Beetle, which was published around the same time as Bram Stoker’s Dracula and which outsold it for a while (it’s also a pretty good book if you care to give it a try but, alas, the silent movie version of the novel has been lost to time). That was the only thing I’d read of him until I found myself, as is my habit a couple of times a year, browsing the latest additions to the catalogue at the Blackcoat Press website. I’ve talked about Blackcoat Press before as I make it a point, every Christmas time, to read one of their annual editions of Tales Of The Shadowmen collections (read my reviews here and here) but this time I saw listed, The Complete Adventures of Judith Lee and, as I looked at the brief summary, I realised I would have to read this at some point.

Miss Judith Lee’s adventures were written by Marsh primarily around the second decade of the 20th Century and take the form of short stories, all but two of which are written first person. The first batch which make up the first half of this volume were all published in The Strand Magazine at the time and, of course, this makes her a contemporary of a certain literary detective whose exploits were recorded by Arthur Conan Doyle (or Dr. Watson, if you prefer). Like Sherlock Holmes, Miss Lee solves crimes, the solutions of which seem far outside the realms of mortal man to fathom... although in Miss Lee’s case, her super powers are not so much her extraordinary brain (which it kind of isn’t, truth be told) but something far more novel, which I’ll get to in a minute.

The original Strand magazine stories were collected in a single volume not long after their publication entitled Judith Lee - Some Pages From Her Life, which makes up roughly the first half of this volume. Then, for completeness, a single tale never before reprinted is included at the centre of this tome. This is rounded off with a reprint of a second collection of short stories, The Adventures Of Judith Lee, which were published after the writer’s death and, possibly, with some finishing touches by his wife (the forward isn’t completely clear in this matter and, bearing in mind that the majority of the tales are told first person from the female point of view, I have to wonder just how much input Marsh’s wife had on the original tales and how much ‘finishing’ she had to do... if that is even ‘another story’ then I certainly don’t have the means to research the answer to that question myself). So this edition really is the complete adventures of the titular heroine.

Now, she’s not exactly low in intelligence but her character does, it has to be said, change and progress somewhat over the course of the stories. Her special skill though, aside from at some point learning Jiu-Jitsu, which she puts to good use in at least two of the stories, is lip reading. She is a teacher of the deaf and dumb and a consultant in teaching her students all manner of talents... which means she can read anyone's lips from across a crowded room or a train carriage and ‘hear’ exactly what is being said, even if spoken as a whisper. She is in no way a private detective but since she is, it would be an understatement to say, inquisitive as to what she accidentally sees people saying, she tends to get involved in all kinds of schemes involving murder, theft, blackmail and, on more than one occasion, ends up herself accused of one crime or another before she sets things right.

Of course, the one limiting factor in the stories is that almost all her cases involve accidentally stumbling on something said and, somehow, being able to recall for the audience huge long conversations as she reads people’s lips. Which, frankly, implies she also has a photographic memory but I don’t think much is ever made of this obvious fact.

The first half of the book is enjoyable but also quite annoying as the earlier version of the character does seem to be totally naive when it comes to the world around her. She will often overhear a clue, the meaning of which is quite obvious from the outset to most readers but, alas, her mental acuity is not such that she often understands just what loaded weapons are being placed in her hands when she lipreads something unintended for her. I guess if the plot was obvious to her the stories would be a good deal shorter but sometimes waiting for the penny to drop can be a bit galling.

Later on though, she becomes a bit more interesting and gets quite witty and ironic in the way she conducts her affairs. The stories often get a bit more exciting too, with stolen goods and heists being replaced by assassination attempts including deadly snakes and, one of my favourite twists, bombs planted in chocolates so that the act of biting into one will cause it to blow one’s head off. There’s also the occasional brawl, people cut into little bits in order to be slowly disposed of in creative ways, an incident with the German military over the murder of an aircraft inventor and even a death which, to her surprise, Miss Lee finds that she herself had been an inadvertent catalyst for, in terms of the behaviour which exacerbated the incident.

It has to be said I enjoyed the second collection contained in this book more than the first but there are also tell tale signs in the book that Marsh couldn’t help projecting a ‘male gaze’ at the character. For instance, she seems to hate the idea that a man would marry her and sometimes seems so smitten with the fairer sex in one of two instances that I think it’s fairly implicit for the time, perhaps, that the character may harbour lesbian tendencies (although it’s never once discussed outright). The one thing which did make me laugh, though, was the criticism of her fellow women to carry something so impractical as a travel bag to keep their valuables in on long journeys. I read that paragraph and thought to myself... only a man could have written that.

All said and done, though, I have to say that, despite the early... let’s call it ‘innocence’... of the character, I thoroughly enjoyed The Complete Adventures Of Judith Lee and am amazed that the lady hasn’t once made the transition into films or television over the decades. I think the stories as they are might be a little too simplistic to attempt to dramatise in another format but the character and a combination of embellished versions might well be a goldmine for a clever screen writer, I would have thought. I’d love to read more of her adventures in book form too but I can’t see anyone picking up this character out of the relative obscurity of her literary environment and penning any sequels today. Although, with Blackcoat Press and some of the other characters they’ve published over the years, I might get lucky with that proposition at some point.
Posted by NUTS4R2 at 16:58