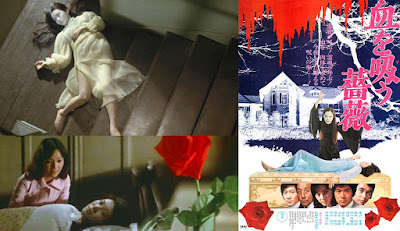 Things That Go
Vamp in the Night

So Evil Of Dracula is the third and final of the movies which Arrow have chosen to collect together as The Bloodthirsty Trilogy, although, as I mentioned in my reviews for the previous two films in the series (here and here) it’s really just a collection of films from around the same period by the same director who just happened to be shooting vampire films (although the first is not necessarily about vampires) and which are stylistically similar... much like Sergio Leone’s so called ‘Dollars Trilogy/Man With No Name Trilogy’, which is comprised of films that are actually not sequels to each other.

Now, once again, this film has nothing to do with Dracula (the other problem with the titling on this trilogy... even the first one which was originally titled Legacy Of Dracula for some of the overseas market), although the back story of the vampire characters here could, arguably, be said to be formed from a possible Dracula story... although the original vampire is both unnamed and has absolutely nothing to do with the Bram Stoker character either.

This one is about a psychology teacher called Shiraki (played by Toshio Kurosawa) who arrives at a school at the request of the school’s principal, as the principal wants him to take over from him at some point in the near future. You’d be forgiven for thinking Shiraki has stepped out of a Western of some kind as the opening titles are pitched over an image of a station with the platform to the left of screen and the train tracks running up to the camera view. A train slowly approaches and, after a cut or two, Shiraki steps off... the stranger in town, so to speak. Pretty soon the soundtrack by Riichirô Manabe, who scored both the previous two movies of this loose trilogy... not to mention the score for one of my favourite Godzilla movies (Godzilla Vs Hedorah)... turns into what I can only describe as a low key, jazz funk stew. In fact, the music for this film of the series, especially, is a little overpowering but this is also kinda commented on early in the film when the music seems to be mixed too far into the background. Suddenly, though, as a door is slammed shut, the music cuts out at the same time... almost like a French nouvelle vague moment of deliberate ‘immersion sabotage’.

As he is being driven from the station to meet the new principal, Shiraki observes a car wreck and he is told that the principal’s wife died only a few days before. Of course, if you’re as suspicious as any audience member who’s watched more than one vampire movie in their lifetime would be, you’ll know straight away that both the principal and his good lady wife are, indeed, bloodsucking vampires. Once the penny drops for Shiraki, it’s up to him, his newfound professor friend with a penchant for vampire mythology and a trio of teenage schoolgirls (who get whittled down as the usual, bloody vampire collateral damage while the film progresses) to discover just how many of the vampires there are and to thwart their deadly plan which, in this instance, involves plotting Shiraki’s death while the principal takes on his identity, literally his face, in a way which I shall make clear in just a moment.

And, if nothing else, it’s consistent with the previous two movies in that it’s a stylishly shot ride and incorporates some nice ideas. For example, we have a scene where one of the girls is captured by the undead principal’s wife and has her face cut off so she can wear it over her own... absorbing her features and becoming the young girl, effectively... as far as her identity goes, at least.

Another thing the film has which is a little different to a fair number (though not all) vampire flicks is that the lady vampire tends to bite her victims in the top of their breasts. Indeed, this is made even more explicit in a scene near the end where, after tearing the robe of her next meal and biting down in the general area, we get a close up shot which is held for quite a long time, of the naked breast with blood running down it past the nipple. Which is a really strange insert, actually, because when we cut back to the long shot, it’s clear that the actress still has her dress fully on with everything covered up. So not so great an insert and neither is a shot of the actresses’ naked body, laid out on a flat surface, as a post obscures her face... so I’m pretty sure the actress had a body double for these scenes (which kind of takes the fun and credibility out of it, to be honest).

Another nice idea is when Shiraki develops the discarded camera of his missing professor friend to find that, after the professor had taken a shot of the ‘principal’ vampire fanging up a young lady, only the victim has come out on the shot, holding onto her (unseen by the camera) vampire master in a hug. So it’s nice that the main protagonist uses photographic evidence or, rather, the specific lack of photographic evidence, to confirm his suspicions that there is vampirism afoot.

Once again the main male vampire is played by Shin Kishida and, although he’s definitely playing a different character to the vampire antagonist he played in Lake Of Dracula, he still wears the long white scarf/black suit combination in this one. So, a fashionably dressed vampire at least... who takes absolutely ages to die when his number is up at the end.

The main star of the show, though, is the director of photography, working with the director to come up with some nice shot designs. I love the way they’ll deliberately shoot from halfway up some stairs and into a room so the long, upright post coming off the bottom bannister can be used to split the screen up with the left hand third sliced vertically to give a more interesting space. He uses the camera in similar ways in the labyrinth of corridors in the school, facing out at junctions to split the screen into a trio of textures. There’s also a lovely long shot of two of the main protagonists walking towards the centre of screen, more or less in silhouette, as they walk through the long horizontal stretch of crosses which make up a graveyard stretching the full width of the frame with a huge mountain on the horizon behind them.

There are a few oddities too, however, with some of the camera work, such as the odd ‘point of view’ shot from the main protagonist’s perspective which seem like kind of an odd choice when compared to how the rest of the film has been made. I’m not sure why that was there but it is at least used effectively and it doesn’t hurt the film any.

The long and rather unimaginative and anticlimactic double vampire death scene at the film's conclusion is, if anything, way too drawn out but, again, you can forgive the odd bit of over-the-top melodrama of the long dead lovers holding hands which crumble to dust when the rest of the film is reasonably entertaining. And that’s probably my final conclusion on Evil Of Dracula, truth be told... that it is ‘reasonably entertaining’. This whole, loosely marketed trilogy of Japanese vampire films are not exactly the best vampire movies you are going to see but they are of interest, especially to fans of the sub-genre of horror dealing with vampires and, absolutely, Arrow’s Blu Ray collection, The Bloodthirsty Trilogy, is the best way to see these films as they have got some nice transfers and some okay extras on the first disc. And they’re a bit of an education, too, in terms of Japanese cinema’s attempt to culturally absorb and assimilate the kind of horror cinema being put out by the likes of Hammer, Amicus and American International Pictures around the same kind of time, for sure.
Posted by NUTS4R2 at 18:24