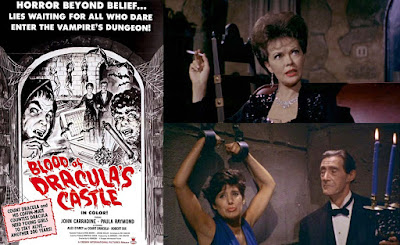 Okay, so the next film up in my mammoth exploration of the beautifully put together Severin box set, Al Adamson - The Masterpiece Collection, is... Blood Of Dracula’s Castle. And, it’s a surprising one because, after Psycho-A-Go-Go (reviewed here) and Five Bloody Graves (reviewed here), I was coming around to maybe thinking that Adamson wasn’t just a director of trash and was actually an unsung genius and, you know, as I go through this set more I may find that to be the case. However, this movie is truly an argument for the opposite conclusion.

It starts of nicely enough with Vicki Volante as an unnamed character driving her open topped car through roads cut into what looks like a half desert, half forest kind of environment, to the sound of a pretty simplistic pop song. However, she turns out to be a not so intelligent character when she discovers she’s not filled her car with enough petrol and it runs out, stranding her in the 'desert forest'. So she gets out and goes to try and find help, walking slap bang into... a thuggish brute called Mango, who works for Mr and Mrs Dracula... who lease a castle just nearby. She gets chained in their cellar, along with a bunch of other young ladies, so Dracula’s butler, played by John Carradine, can slowly syphon off their blood, day by day, to pour into wine glasses for Count Dracula (played by Alexander D'Arcy) and Countess Dracula (played by Paula Raymond) to sup from. So, yeah, they have their own little blood bank in their cellar.

Immediately following the abduction of the gal by Mango, we cut to a bunch of dolphins and the two main protagonists of the movie. Here we have Glen (played by Gene Otis Shane), who is a professional photographer taking shots of his model fiancé  Liz (played by Jennifer Bishop). There are a lot of shots of Seaworld while Glen takes pictures of Liz in various costumes and poses as she cavorts with sea lions and such like. The only reason I can think all of this padding is in here is because Seaworld must have been relatively cheap to hire and so they wanted to get some substantial footage shot there. Anyway, while they’re at Seaworld, Glen gets a message handed to him because, yes, you would get a stray telegram or post handed to you while you’re out visiting Seaworld, right? Um... okay, ignoring this new rumple, the message says that Glen’s Uncles Tom has died and left him his castle in his inheritance. So Glen and Liz decide to go off to visit the remote castle to live there (because, of course a model and photographer who are living in the city where their jobs are would want to go off to some remote spot hours away from civilisation and live there). However, they are a little worried because Uncle Tom’s castle has been rented to an old couple for the past 90 years (so Tom never lived there then?). You can see where this is heading, right? When they do get there a bit later in the ‘story’, the couple don’t look as old as they expect and, that’s because they’re really hundreds of years old vampires, of course.

Meanwhile, as they make their way through the same desert/forest roads that Mr. and Mrs. Dracula’s last victim took at the start of the movie, Dracula has arranged for ‘friend of the family’ Johnny, played by Robert Dix, to be 'released' from prison where he’s serving time for being a crazy, homicidal lunatic. There’s a cameo from director John 'Bud' Cardos as the prison guard under Dracula's pay who asks Johnny to hit him over the head to make his escape look realistic. Johnny does him one better, getting to like it after the first hit and then bashing his brains in with a rock as he smiles and laughs about it. It wouldn’t really need anything else to cement this character's reputation as a psycho with the audience but the writer and director then proceed to drive the message home by showing us his long trek through the desert, pursued by prison guards.

Even though, you know, Johnny needs to make good his get away and find his way back to the castle, he suddenly comes across, in the middle of nowhere and cavorting near a small waterfall, a bikini clad gal. Who, of course, he then drowns in the water. He then comes across another guy with a car and he smacks his brains in with another rock (a fine weapon of choice), loading him and his handy shotgun into the back seat to drive back to his mates, 'The Draculas'. However, on the way he comes across a hitchhiker who he shoots through the window with his shotgun, dumping him into the back seat with the other guy and switching clothes with one of them (in the most ridiculous and less than credible manner possible, while he is still driving). He then pushes the car off the cliff with the corpses in it, knowing the cops will find his clothes on one of the men and somehow assume it’s him and stop looking for him. Bizarrely, although I was pretty sure both guys in the car were dead, as the car goes over the cliff and rolls down the rocky terrain, one of them lets out a scream. Yeah, I really don’t know what’s going on here at this point. Robert Dix was pretty good in Five Bloody Graves but, honestly, though he tries his best in this one, he just doesn’t have any decent dialogue to work with and his forced, maniacal laugh isn’t quite what the doctor ordered to be honest.

Pretty soon after Glen and Liz arrive at the castle and stay for both dinner and the night (in a guest room) but, after refusing Dracula’s offer to buy the property, they know something’s up. The next day they go to investigate the ‘toucan’ they were told was responsible for all that screaming they heard in the night and find the chained up gals. They then get chained up themselves but are all left free as they are forced to wear robes and go up a hill while John Carradine and his employees burn Vicky Volante at the stake, as a sacrifice to the great moon God Lunar (I’m not making this up, by the way). But, when they get back to their dungeon they break free and Carradine, Johnny and the Draculas are killed. However, Liz is nabbed by Mungo who takes her up a cliff. Glen follows and, though it looks like they are doomed to a dumb demise due to Mungo’s brutish strength, Glen happens to find a nearby axe just handily laying around by one of the rocks and finishes the towering man servant off. End of story and, frankly, that ending came in none too soon.

It’s easy to trash this as just a really terribly made movie... and so I have. However, I will say that Adamson’s visual flair... or eye for hiring someone with visual flair... does come into its own in a few places. The cinematographer here was a young Lazlo Kovacks and it does show from time to time. Seriously, how did Adamson get to work with so many ‘A’ list, award winning professionals in his early movies? I guess everyone has to start somewhere.

So yeah, there are some nicely done shots with vertical split sections and they manage to get a lot of depth into some of the frames. The print is in terrible shape though but Severin have, as always, done their best with the materials they have to work with. They have also included another, extended TV version of the movie where someone, probably not Adamson, has added 7 or 8 minutes of werewolf sub plot. It’s hinted that Johnny goes more than a little crazy when it’s the full moon (although I honestly don’t see how he could get to be any more of a volatile nutter than he already is in this) and so I guess he goes 'full wolfman' in this cut. I was going to watch this version so I could give a more rounded view of it here but then found out that it’s been cropped into a 4:3 aspect ratio for television and, well, I’m sure fans of cinema will forgive me if I take a pass. I’m sure some of you, like me, get stabs of pain and deep anxiety when forced to watch a film in an incorrect aspect ratio. It’s not something I would wish on anyone so, I can live without those extra minutes of lycanthrope filled footage, to be honest.

And that’s that. I don’t know why Carradine is only playing the butler here when he already played Dracula twice for Universal in the 1940s but, it’s not so much of a missed opportunity when you see how awful this film is. I can’t recommend Blood Of Dracula’s Castle in any way, shape or form but I can certainly recommend the wonderful box set it comes as part of and, again, my compliments to Severin on this one.