Video Palace - In Search Of The Eyeless Man 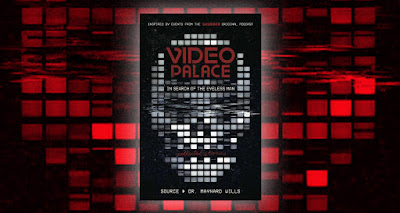 Video Palace - In Search Of The Eyeless Man is a spin off from the popular podcast Video Palace (which I reviewed here). It’s presumably put together by the show’s creators, who have invited a number of writers and luminaries from varying fields (such as actress/director Brea Grant) to take part in the project and who have all contributed a story which, for the most part, are iterations of the fictional antagonist of the podcast, the mysterious Eyeless Man. The gentleman in question being a lurking figure of dread whose ultimate goal of transforming people and allowing them access to other, presumably horror filled worlds of personal torment and suffering, is kept deliberately obscure and unexplained in terms of a tangible direction. This, of course, makes for good horror as the fear of the unknown, as we’re always told, is one of the scariest things going.

Now, the book is presented documentary style, just as the original podcast was, which used the proposal of the slowly forming narratives of each week’s episode being created by a central protagonist knowing each podcast he was cutting would be released on the Shudder horror channel that week. Indeed, there’s similar mention in one story, of the publishing house of this book, Tiller Press, by one of the characters in this tome. Central binding material is presented by Doctor Maynard Wills and, after, by his former student and fellow university Professor Daniel Carter... I don’t think it’s a spoiler to say, after the structural set up in the foreword by the fictional Carter, that the Professor will become victim to his own obsession and drop out of the narrative half way through. It’s expected and frankly alluded to very early on in the proceedings.

Now, you may remember, if you’ve been reading this blog with any regularity during the Christmas season, that I’ve not been getting on too well with written horror anthologies. I mean, sure, I love the obvious classics by Poe and Lovecraft but the various Christmas ghost story collections I’ve been reading have been a very hit and miss affair... as is the nature of anthologies but, honestly, it’s been mostly miss. So it’s kind of refreshing to reveal now that Video Palace - In Search Of The Eyeless Man, while naturally having both peaks and troughs in content, is actually a solid and fairly engaging read. Sure there are low points but even those are pretty decent and I was in no way let down by the book... my criticisms are minor and I was certainly entertained greatly by a few of the stories.

As I said, most of the stories focus on past and present iterations of ‘the eyeless man’ and, like Video Palace, they are mostly about accessing his presence to begin the descent into personal hell through various mediums... not just the urban legend of the ‘white tapes’ as in the podcast, although these VHS video cassette tapes (and even a U-Matic video of one... gosh it’s been decades since I used that format) certainly do appear in a number of the stories.

So we have writers like Owl Goingback, Graham Skipper, Brea Grant, Gordon B. White, Merrin J McCormick, Meirav Devash, Eddie McNamara, John Skipp, Ben Rock, Bob DeRosa, Rebekah McKendry, David Ian McKendry and Mary Phillips-Sandy describing all manner of access points into the lives of their characters, told mostly in first person (although not always) and with various variations covered such as musical entries, obscure channel television broadcasts, social media models (and a murderous follower), a student documentary film maker, a murderous internet meme doppelgänger, a sinister self care group and various other things with topics even going into the relationship between dreams and the quantum realm.

Probably my favourite of the main stories, which are all linked and book ended with inserts by either Wills or Carter, was the ‘interview’ transcript, A Conversation With Tamra by Mary Phillips-Sandy. This one is unique from all the others in that, unlike the linking inserts of Dr. Wills himself (who is renewing his interest in the pursuit of the eyeless man specifically because this fictional character heard the podcast), the interview is actually a direct sequel, of sorts, to the podcast in that it deals with what the main female lead character, Tamra Wulff, did next after her boyfriend Mark Cambria went 'missing'. Although, bearing in mind the nature of this kind of horror narrative, don’t expect any solutions to the ultimate mystery being discovered along the way, of course. That’s usually kind of the point on these sorts of narratives, building on the intrigue of the central premise and asking at least as many questions as they attempt to answer.

My one grouch about the whole book was the segment which was supposed to be a snapshot of a letter Dr. Wills left in is own handwriting. Sure, it’s hard to decipher but, alas, it’s definitely been printed in a ‘script font’ rather than the book designer using genuine handwriting and that does nothing to add to the authenticity of the rest of the framing devices, especially when such great care has been taken to ‘stick to the illusion of the search’, to to speak.

What I loved about this tome though is the fact that everything else did exactly that. The illusionists at work in the fictional form of Wills and Carter even leave the different writer’s spellings of the words that formed the ‘opening chant’ of Mark Cambria in the show, ‘Ota Keta’, because, well, how would anybody know how it’s actually spelled? And, of course, the variance in this small piece of connective tissue becomes another thing which ‘authenticates’ the fictional validity of the various stories... because if the writers all spelled everything exactly the same then a single guiding hand... other than the eyeless man, of course... could be detected by the unwary reader. In fact, the character Wills even makes reference that he’s left the different spellings unaltered, which is a nice touch.

Another nice touch is that each main story is prefaced by a note from the author(s) to Dr. Wills about their inclusion in his research project... so, yeah, there must be some section of the target audience who might actually fall for the illusion too, which is a nice thought. There’s even an email address included in the book for ‘would be contributors’ to leave their own encounters with the eyeless man, as Daniel Carter begins to follow his own obsessional research into the titular figure.

So yeah, that’s me done on this one. Video Palace - In Search Of The Eyeless Man is a welcome continuation of some of the ideas brought up in the serialised podcast Video Palace and I think if you liked the show then you’ll probably get something out of this. I would say it’s probably not a good jumping on point for many since it does include all the obvious spoilers of the events that unfolded in the podcast so, yeah, maybe go listen to that first. All in all though, a nicely put together and well paced anthology of horror tales which didn’t disappoint me the way some other collections have in the past few years and a welcome addition to the book shelf (or book stacks in my case, actually, it has to be said). Worth picking up, for sure.