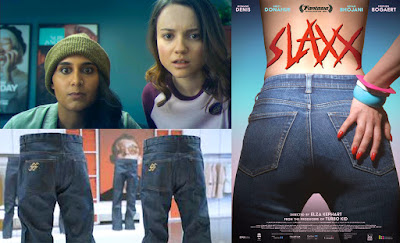 Killy Jeans
At My Door

Warning: Yes, there will be much spoilerage.

Just a fairly quick, short review to highlight a wonderful new movie I saw called Slaxx. This one is pretty much a horror comedy and it’s got one of those novelty concepts at its heart which ensure people like me are going to want to look at it, just out of curiosity. Films like that are always so much better if they’re well made and entertaining and, hey, those two elements pretty much summarise Slaxx.

The film starts with a wonderfully long tracking shot over the opening credits of the length of a cotton field with the people in India picking the cotton out of focus, while the plants are in extra sharp focus and you can see the detail of the flora. We are then introduced to a young, 13 year old cotton picker working in Experimental Field 357 for the big money clothing corporation, Canadian Cotton Clothiers. At this point, we don’t see what happens to the girl (who is called Keerat) but, as we focus in on the CCC label on the sign, there’s a transition to a box of their new, experimental denim jeans being delivered to a store in the USA. It’s here we meet the film’s main protagonist Libby (played by Romane Denis), the gung ho manager Craig (played by Brett Donahue) and a whole bunch of other workers including Shruti (played by Sehar Bhojani).

Libby is the new girl, just starting her employment on this Sunday evening, as the shop goes into a 12 hour lock down with all the workers inside getting ready for Monday Madness, when they will be launching, exclusively at this particular branch, the new CCC self-body shape fitting jeans. That being said, they will be unlocked for one hour during the night so a social media fashion queen can record her next, promotional v-log of the new product. But, of course, things start to go wrong when one pair of jeans starts to move around by itself, as one lady wearing an advance pair has her legs crushed by the jeans and her intestines sucked out of her bottom. Of course, the nice thing about this pair of jeans is it can wipe the blood off the floor after a kill and hide the body until the next victim comes along.

Things, of course, escalate and it’s not long before it’s just Libby, Craig and Shruti trying to survive the denim onslaught. They do find a few useful things along the way, however... such as the jeans having a weakness for Bollywood music and there’s a nice scene where a pair is distracted from its potential victim as it dances to the tunes.

And, as you can guess from the description above, the film is a lot of fun. The director has some nice things going on such as the sterile white of the main sales floor contrasting with the pastel greens, dingy yellows and washed out blues of the lower levels, where the killing initially takes place before stepping up a notch into wholesale slaughter in the main shopping area. She’s also got some great actors in the cast who really knock it out of the park.

Talking of which, there’s a real split to the acting here. Almost all the characters are completely over the top in their ‘corporate love’, seemingly worshipping the outrageous company they work for with a certain, ‘not quite but almost’ hidden cynical disrespect of everybody else. They are nearly all wannabe corporate climbers except for... well, Libby and Shruti. Libby is genuinely coming to work for CCC because she loves the company ethos... an ethos she finds is completely false by the end of the movie. She’s not over the top and is the character who is the more down to earth one, who reacts to situations and thinks things out. Shruti is much more cynical and less naive about things but she’s also one of the more laid back and less wide eyed people in the store and so, due to the acting styles here, they seem much more sympathetic to the audience... which I suspect was a request from the director. Craig, however, is the epitome of all that’s bad about the company and there is a crossover point where he suddenly takes the ‘human villain’ role in the story. But, like I said, Libby is the driving force here and there’s a wonderful scene where she figures out a pair of jeans which is controlling a mannequin must speak Hindi and the girls are able to communicate with it. It’s here we learn just why, not one pair of jeans but, all of the new pairs in the jeans in the shop, are coming to life to kill people and the director seems to be pushing a bit of a message about giant corporations who employ child labour etc to make their products.

And it’s hugely entertaining, I have to say. It’s also very gory and there’s a lot of blood from various different styles of ‘jeans kills’ in this one. It’s also very funny too and, clocking in at 77 minutes, it doesn’t get dull or old at any point. In fact, I would have been happy if it had gone on for longer.

So, yeah, that’s my take on the wonderfully violent, funny and utterly charming movie Slaxx. I would recommend this to pretty much anyone into horror, comedy or that long historic union between the two genres which usually tends to work well and, if you give it a go, please note that after the various out-takes from the film that are scattered throughout the end credits, there’s also a post credits sequence. Not a particularly good or relevant one, it has to be said (yeah, I’m not going to tell you how the film ends but there’s not much coming back from this one) but it’s there if you want it. I was really pleased I found out about this release and, you never know, we may even get a Blu Ray release if we keep our fingers crossed. I know that’s one I’ll be picking up, for sure.