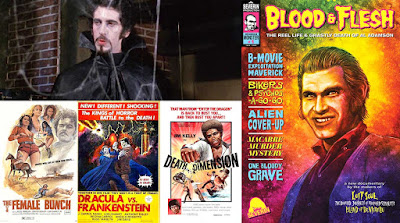 I’ve only, at time of writing this, seen one of Al Adamson’s movies before. That was the incredibly bad but hugely entertaining Dracula Vs Frankenstein (reviewed, succinctly, by me in my early days of this blog here). However, there were a few I had on my list to try and get hold of but then Severin, who are a label worth reckoning with, released this limited edition, very long term project they’ve been working on for... well something like a decade, I think. And it’s really expensive too... probably the most expensive set I've ever bought. I finally pulled the trigger on this thing right before it sold out because... well I’d saved money from not travelling during the coronavirus lock down and it was likely that I would never again have the opportunity to see these films unleashed all in one place at the same time... 32 movies. So I wept into the remains of my tattered wallet, bit the bullet and ‘done the deed”.

This set also features this brand new feature length documentary film... Blood And Flesh - The Reel Life And Ghastly Death of Al Adamson, which was directed by David Gregory, who had made Lost Soul - The Doomed Journey Of Richard Stanley’s Island Of Dr. Moreau, which I watched and reviewed earlier this year (right here). Now, normally I would leave the documentary in a new set until after I’d watched all the other films but I figured, in this case, since I knew so little about Adamson (but had heard some disquieting rumblings), that it might be worth watching this thing so I could get an overview of his career and the strange way he finished his life.

Turns out Adamson was the son of an old, early Hollywood cowboy star/director called Denver Dickson (Victor Adamson) who turned down an offer with Universal studios in favour of making his films for his own production company. He had numerous movies coming out just at the tail end of the 20s and into the 30s, 40s etc as well as appearing uncredited in many movies and TV shows over the years up until his final appearance in the aforementioned Dracula Vs Frankenstein (he appeared in 285 productions according to the IMDB). So I guess the world of B-movie show business was somehow in Al Adamson’s blood when he started trying to direct/produce and also appear in his own films.

He was very much one of those kings or princes of the American made exploitation films and I guess you would think of him in the same breath as people like Herschell Gordon Lewis or, in some ways, a poor man’s Roger Corman, with even smaller budgets than Corman but making pictures which did very well on the drive in circuits in the 1960s and 1970s. This documentary details his story with interview footage from producers, friends, co-stars and even some of his stars, such as the legendary Russ Tamblyn, who was in a few of his movies like biker gang film Satan’s Sadists, Black Heat and the Dracula Vs Frankenstein movie. It also has appearances by Adamson himself in archival interview footage which must have been taken not too many years before the ghastly death mentioned in the title.

It shows many of the people who he worked with in some capacity or another such as... well lets just do a little list to whet your appetite...  Colonel Sanders (the real one, promoting his Kentucky Fried Chicken in one of Adamson’s shoots), Charles Manson (he shot one of his movies on the ranch shortly before, or possibly during, the famous murders), John Carradine, Jim Kelly, Lon Chaney Jr, J. Carrol Naish, George Lazenby and even Forrest J. Ackerman. Some of these are seen only in clips from the director’s movies and some of them in archival footage. And it’s a rare treat listening to some of the stories his friends and crew tell... many of them who were working for ‘experience’ and no fee on Adamson’s shoots. It’s also amazing to discover that he was working with the likes of such famous cinematographers as Vilmos Zsigmond and László Kovács very early on in their careers too.

Additionally, there’s the tale of the unseen footage, enough for three movies, where Adamson was called in to make a dramatised documentary film about UFOs. He was a total non-believer in the stuff until, it’s alleged (and then the various interview subjects clam up when they realise the camera is still running), he was taken to meet a fully documented alien/human hybrid person and that, after a while, everyone backed away from the film they had been making because they all thought it was too dangerous because... yeah, government and ‘other worldy’ intervention.

It’s also tells of the tragedy of his losing his wife Regina Carrol, who starred in most of his films, to cancer a few years before Al’s untimely death. Followed by that tragedy itself as Al was hammered to death by a friend who he was hiring to work on a ranch he was living at, only to be buried in a bag under where the old jacuzzi was, which had been ripped out and replaced with his corpse before being cemented in and having tiles laid out over the top of him. The last part of the documentary plays like a police procedural set of interviews as friends, relatives and various law enforcement officials talk you through the details of how the missing director was finally ‘discovered’ and how they found the culprit living in Florida with his latest girlfriend and her young child, safely bringing the killer (who denies it to this day but the evidence seems pretty damning) to justice (of a kind).

And, yeah, it’s certainly an interesting narrative... usually when a documentary of this kind surfaces, it doesn’t end with the director getting murdered in a way which wouldn’t look out of place in one of his own, sometimes gory movies. It’s a hell of a way to finish up a movie which suddenly takes a turn in a different direction from the way it started out and, of the two documentary films I’ve seen by David Gregory, as interesting as that other one was, I think this one is even better. It really is a nicely put together, informative and straight-on look at one of those ‘maverick’ directors, if I may use the term, who probably wouldn’t be remembered in a lot of people’s top ten movie lists but who certainly gave the backdrop of American cinematic culture an added layer of questionable texture and who is... unforgettable in his own way.

Of course, it goes without saying that Severin’s amazing new box set is crammed full of extras for each and every film (including this documentary) and is beautifully packaged as a book in a slip case with the fourteen Blu Rays housing the 32 films in a series of double page spreads including poster artwork from the films, not to mention a sizeable bound book talking about these, also housed within the slipcase. And if you don’t want to shell out for this full retrospective career of the man’s work, painstakingly restored by Severin in ways that you wouldn’t expect films like this to be enthusiastically resurrected, then this documentary can also be bought as a stand alone release from the same company. If you are into the history of exploitation films of all kinds... secret agents, blaxploitation, horror, sexy stewardesses and various examples of ‘niche’ moviemaking, Blood and Flesh - The Reel Life and Ghastly Death of Al Adamson is probably something you’re going to love. Definitely worth checking out, that’s for sure.
Posted by NUTS4R2 at 18:06