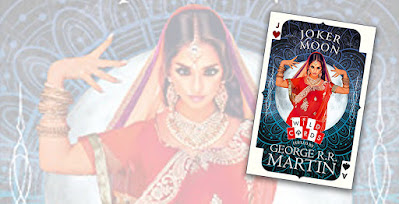 Joker Moon is, by my count, the 29th of the series of mosaic novels which comprise the Wild Cards saga to date. The majority of most of the novels are short stories, often split between sections, which make up an overall story arc for that specific novel, written by a hugely talented array of science fiction and fantasy writers over the years. Nowadays, the overview and editing of the novels is accredited to George R. R. Martin & Melinda M. Snodgrass although, I have to say, it’s been many years since I’ve seen Martin contributing significantly to the content as he used to (although Snodgrass still has at least one story per novel, it seems to me). That being said, this is obviously a marketing ploy for the front covers to cash in on Martin’s successful Game Of Thrones novels and, I can’t blame them, to be honest. I noticed on the inside of this one, it actually says it’s edited by Melinda M Snodgrass and ‘assisted’ by George R. R. Martin so, yeah, make of that what you will.

I’ve been reading these novels since they first appeared, with handsome paperback covers by British comic book artist Brian Bolland, in the mid-1980s and, hard as it’s been over the years where various publishing houses for the series have gone bankrupt a week after a novel came out or just jumped ship on the series, I’ve managed to buy a copy of each and every one, more or less, as they were released. On the one occasion where one went in and out of print within a week or so, as is my understanding, I actually picked that one up on ebay a few years later and... that was even more of a thrill because it turned out the guy selling it to me, who only had one copy left, was the sole writer of that tome so he personalised it for me. So, yeah, I’ve been lucky with this series of novels over the years too, for sure.

The basic plot is of an alternate history of Earth when the time line diverges from our own in 1946 due to an alien Black Card virus, which is our constant legacy for ever after, is released into our atmosphere. Many die. Some people stay the same... the Nats. Some turn into Aces with superheroic and bizarre powers. Some turn into hideous jokers of all shapes, sizes and forms. And some of them, Deuces, are a little bit Ace and sometimes a bit Joker too. And there’s anything in between. And because the virus is lodged in our genes, sometime (in puberty perhaps), your card might ‘turn’ and you get powers or go through some hideous mutation.

And the books are great, it has to be said.

Over the years we are introduced to characters and some are killed, some age and die and other generations take their place. Indeed, sometimes, as in the case of Roger Zelazny or Victor Milán, writers die and their specific characters either exit the story, are used just as little cameos or, sometimes, taken over as something all the writers can seem to include in their stories if they like. So one of the most famous characters in the saga.. Croyd Crenson (aka The Sleeper, created by Zelazny), who has an infinite lifespan because whenever he finally sleeps (when the speed he’s on to stop him from sleeping finally doesn’t do him any good) he wakes up as either a new kind of Ace or Joker... still turns up every now and again from the original generation of Wild Card heroes. And, yes, for all of those Wild Cards fans who are constantly on ‘Croyd watch’, I’m happy to report that he does indeed have a few pages of a very specific adventure in this latest volume.

Okay, so the main interlocking story points of this one, as told through multi-part chapters gluing the other stories together with split sections entitled The Moon Maid and Within That House Secure, are focused on three specific characters. We have the Indian, Aarti, whose card turns in 1948 when she’s studying at Oxford University over here in the UK (among her fellow students are J. R. R. Tolkien and C. S. Lewis). She has her head swelling up to resemble the Moon and her body marked by craters etc. However, unknown to everyone, is the fact she is teleported to the moon by night and has the night time to paint and frolic and create whatever she wants with her special powers on the moon. So she’s more or less confined to her bed as a joker by day but, by night, she is the sole occupant of the Moon, and she likes it that way. Which is where her other problems begin.

The other two characters start off as children... Mathilde is a red skinned joker girl and her best friend is the super rich heir to a fortune, Theodorus. Both are lovers of science and both have the talent for rocketry. Mathilde is especially good at maths and inventing things. However, not long before his parents’ death, when he inherits the estate, Theodorus’ card turns and he becomes a huge snail centaur, half man, half snail. He doesn’t let it set him back though and he pulls the strings of his ambitions from his rich, hermit like existence with his best friend Mathilde at his side... a bit like Nero Wolfe in a way, since he’s often in his green house cultivating his army of super sized snails.

His ambitions however, take him into direct opposition to Aarti, The Moon Maid. The book takes place in various stories from 1948 up until 2020 and tells the tale of Theodorus’ plans, decade by decade, to populate the moon and terraform it so that all the jokers of the Earth can live there in peace and harmony, free from the hatred and prejudices of the Nats (aka regular humans). But, you know, The Moon Maid has other ideas.

And, like any of the Wild Cards novels, it’s a hugely emotional ride and a very clever series of interlocking stories, which I certainly won’t spoil for any potential readers here. Because it’s set over various decades, many of the characters from the past pop up in odd cameos or mentions throughout. So the original Dr. Tachyon actually turns up as a character early in the novel (a Takisian from the race of aliens whose virus got accidentally unleashed on Earth). There are also sizeable appearances from characters like Bugsy, the joker centaur Doctor Bradley Finn, Tesseract, the Infamous Black Tongue and Bubbles... including one chapter set in the heat of the battle of the war in Egypt where these ‘green’ Aces from the American Hero reality TV show ended up fighting in wars to protect the Living Gods of Egypt. And, yeah, obviously famous Wild Cards twists on history from previous stories make it in as mentions in the novel too... such as The Rox on Ellis Island (where jokers took the island in an incident in the 1990s) and there’s even a chapter where Aces are battling The Swarm again from the 1980s (if you’ve not read these then this is an indication, I think, that if you want to jump on board with these, then you really need to start from the very beginning). There are also some lovely little mentions and very brief, one liner appearances from such Wild Cards stalwarts as Golden Boy, The Great And Powerful Turtle (I really miss that character), the late but great Father Squid and, from the recent British cycle, The Green Man.

And I don’t want to say a whole lot more about the story but I will say it’s as powerful as most of the Wild Cards novels and it contains some great moments (including an unexpected villain from the most unlikeliest place, at one point) and various dramatic situations on both Earth and the Moon. Although the end is a fairly optimistic one, in some ways, it’s a mixed bag of emotional intensity again and I found myself counting the losses in terms of characters who meet their end in this novel as much as watching the bitter sweet celebration of the final mini chapter, which presumably takes us into where the next couple of novels might go. Like I say in pretty much all of my Wild Cards reviews, Joker Moon is an absolutely fantastic novel but... it’s definitely not a jumping on point. These books really should be read from the start and, fortunately for newcomers, the earlier novels are slowly coming back into print again so, if you’re going to do it, now might be a good time.