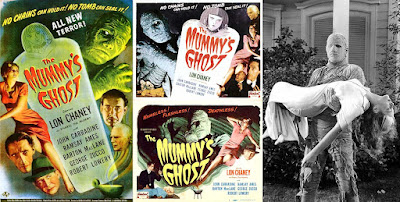 Another Mummy movie, another Bey. This time it’s Youssef Bey, played by young John Carradine. In an opening scene for The Mummy’s Ghost, George Zucco also appears as the High Priest, handing down the secret of the Tana leaves to Bey and giving him the mission of having Kharis The Mummy (once again played by Lon Chaney Jr), go with him to Mapleton, New England to rescue the remains of Princess Anankha and return her to Egypt. Remember the location where the rest of the film is set... Mapleton, New England.

Okay, so we then have the tentative male lead of the film, student Tom, played by Robert Lowery, attending his regular college lessons on the local campus in Mapleton, where the geology teacher is telling all the students about the last time Kharis was in town (in The Mummy’s Tomb, reviewed here), many years ago... even though, once again, the setting of the film is contemporary to the year it was released... which makes absolutely no sense, of course. He tells of the last rampage of the monster and how Tana leaves can be used to revive it because, well, of course that’s the kind of lessons you have in an American university, isn’t it?

Anyway, after class, Tom goes to see his strange Egyptian girlfriend Amina, played by Ramsay Ames. The audience can tell she’s strange because she doesn’t like talking about Egypt, has an undisclosed past and later on, when the resurrected Kharis (who it turns out, isn’t all that worse for wear after once more perishing in the flames at the end of the last movie) passes by her house on the way to murder the Professor of the college (who stupidly figures out that you need nine Tana leaves to call the mummy... so therefore does just that)... she sleep walks to the scene of the crime and collapses outside after Kharis drinks his fill of the potion and the professor is dead. Although, quite why Kharis chooses to strangle the professor for giving him a nourishing hot drink and not do the same to Youssef Bey is anybody’s guess.

The shenanigans continue for the running time of 1 hour and 25 seconds (a very short feature indeed) and it’s nicely paced and shot, although not as well done as the previous film. There’s a nice moment when the watchman at the Scripps Museum is reading a strange detective tale magazine and listening to a horror themed radio show (I’d like to think it’s an episode of Inner Sanctum but I don’t know for sure what it is) and the narrative on the radio foreshadows the watchman’s death 5 minutes later. I’m sure this brought grins of delight to the audiences who first saw this in a theatrical venue, as it still does to me.

It’s pretty run of the mill stuff throughout but, like I said, it’s certainly watchable. There’s a nice moment when Kharis is caressing the bandages of the princess in its museum case at Scripps when the bandages suddenly go limp to indicate the figure inside has vanished into the ether and it’s implied, quite strongly, that Anankha’s soul has jumped into the body of Tom’s special lady friend Amina. This would seem to be about right as there was obviously a family ancestry connection between the two anyway. When she faints the first night, she awakens with a pseudo-Lanchester white streak in her hair. When she faints again and is taken by Kharis, she then has two white streaks in her hair. Then, as Bey is struggling with himself and deciding to take the woman for his own and to make her his ‘forever partner’... in an attack of sexual attraction which seems to afflict most of these Egyptian sect members sent to be caretakers of Kharis... he looks down at her still unconscious form and her hair is suddenly replaced by a white wig.

She isn’t actually awake and when, at the end, Kharis has killed Bey and cut short his sexual enthusiasm, we see shots of her skin ageing considerably as Kharis approaches his final resting place for this movie, as he and his captive are chased into the swamp and sink into its depths to their forever sleep (where forever sleep equals... until the next sequel). Yes, sinking to their death in a swamp in... where? Oh yeah, New England. Remember that folks, for when my next Mummy movie review is up. Mapleton, New England.

Oh, and by the way, the place Bey and Kharis are seen to be hanging out at seems to be those long steps which, I believe, have somehow found their way from the coal mine in The Invisible Man Returns (reviewed here) and into this picture. I don’t mind though, it’s a nice set and it looks pretty good.

So there you have it... The Mummy’s Ghost is an okay entry into the franchise and it would be followed with another ‘continuity screwing’ sequel which tried to follow things from where they were left off in this movie, while still making no logical sense at all. If you thought the continuity was bad up until now, just you wait until the next part. All in all, though, a watchable movie and I will always watch these ones again.