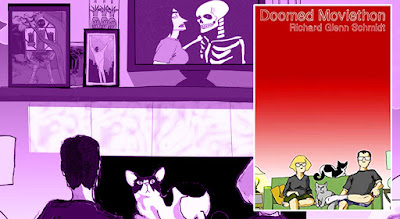 Doomed Moviethon is the third of Richard Glenn Schmidt’s print version spin offs of his web site... being about the author, his wife and the occasional friend binge watching various long stretches of movies over a weekend... linked sometimes quite tenuously by a common theme. You can read my reviews of his two previous tomes, Giallo Meltdown - A Moviethon Diary (right here) and Cinema Somnambulist (right here) and this one, if you’re a newcomer to these books, is very much a case of the author’s enthusiastic but somewhat sardonic style being an acquired taste... something which I acquired about a third of the way through the first book I read of his. Certainly, once I’d gotten into his first volume, I’ve not looked back since... which is a handy tip I would reserve for most readers actually... don’t look back while you’re reading these things or you’ll never be able to see the book you’re holding and quite possibly get dizzy trying to read just dead air. Instead, look forwards so the book is fully in view for best results.

If you can get past the fact that some of the English language used here is mangled and realise, as I did fairly early on with these books, that these are often incidents of deliberate linguistic sabotage on the part of the author for the sake of being silly and entertaining - not to mention the confidence of not explaining the jokes, you’ll either get them or you won't depending on your prior experience of certain films at hand... then you should have as good a time as I do with these books. Especially once you realise that all normal rules of engagement pertaining to critical discourse about these movies are out the window. Richard does completely his own thing here and these are movie responses and reactions to the bizarre and mostly silly films he manages to pick out for his moviethons and, not something which is going to inform you too much about the actual motion picture art in question... although I have to say, I do learn things from his books too.

Once again the book is split into chapters, with each of the 18 chapters covering a specific viewing bonanza. This one also has a little introduction covering the birth of the ‘moviethon’ with the author watching video rentals with his best friend as a kid. There are clear chapters for moviethons dedicated to various of the hot names which a lot of genre fans will happily embrace... such as chapters entitled Argentophobia, Bavadoom, Franco Friday and Video Naschy... as well as chapters which wouldn’t personally appeal to me... like three on American Slashers, which I mostly hate as a genre, give me an Italian giallo any day of the week and I’ll be happy. However, the author’s sense of fun and enthusiasm for even the movies he absolutely hates is infectious and makes each and every chapter a delight.

There are also some nice points which he and I share in common and which gave me a warm feeling in the brain when I read his wisdom on certain things. For instance, I was pleased that he singled out the “punk rock stripper chick with the bullwhip” in Norman J. Warren’s Terror as I also mentioned her in my recent review of the film (right here). Similarly, some of the sessions are obviously throwbacks from quite a while ago as he touches on how difficult it was to get a decent looking bootleg of Dario Argento’s Four Flies On Grey Velvet to watch. Ah, yes, I remember those dark days when the film in question was almost impossible to get hold of and each new bootleg edition was a slight improvement on the previous one... I think I now have five or six different versions now on DVD and Blu Ray and... hooray... the Grey Velvetless days are finally over.

And, yes, if you’re wondering, Schmidt is very up front about where and how he sources his ‘viewing copies’. If he’s watching a muddy, dark DVDR transfer converted from a VHS copy of dubious quality, he will let you know about it and I find this both this honesty and his level of commitment to watching what he needs to watch, whether it’s been released commercially or not, a refreshing attitude in today's bizarrely PC and ‘corporate obsequious’ world. Like me, I suspect he’s happy to go down the bootleg route if it means he can see films before such a time when cartoonists would be able to legitimately draw pictures of him with little crosses where the eyes should be, instead of healthy, living dots.

As usual with this writer’s books, there’s a huge amount of humour and I did find myself entertained, especially when his sentiments reminded me of my own dad’s reaction to certain things. For instance, when he’s talking about Karl Malden in Dario Argento’s Cat O Nine Tails, he gives us the ‘fun fact’* that Malden’s nose got separate billing and its own trailer. And moments like this or when, for example, he will refer to the vampires in Paul Naschy’s Night Of The Werewolf and Werewolf Shadow as “God damn grandstanding bloodsucking undead attention-whores”, really give a reader a good time and a certain accessibility where some more respected critics might lose out in credibility points (and it also helps if you know the movies too, of course, to see the kernel of truth behind some of Schmidt’s words).

Also, how many critics will make a point on counting the number of bosoms and penises that pop up in the viewing experience and give you a running count at the end of a ‘thon? Not many I’m sure. And I’m pretty sure no other grand appreciator of movies has ever written the phrase “Oh man, we just got De Palma’d right in the Hitchcock!” before either.

I should probably mention the fearlessness of the author too, when it comes to watching something he calls Disco Of Death (spoiler... no films with actual death in them but how he got through these terrible movies I’ll never know). And also, that strange combination of both bravery and total insanity in the chapter entitled, Elvis Is My CoPilot because, well seriously, who would attempt to watch a movie with Elvis in it, let alone the amount of them he endures here? This is serious dedication to going to new lows in movie watching as far as I’m concerned. Although, I did learn the interesting fact that Barbara Steele was replaced by Barbara Eden of I Dream Of Jeannie fame in one Elvis movie. And extra credit has to go to the writer here for managing to write about Barbara Eden without once mentioning her bellybutton. Strangely, no navel warfare is on display in his shenanigans here but I was okay with that.

And the book is full of surprises too. Is it a spoiler to say that you’ll turn the page and find two photographs of his constant companions, his cats Crisco and Sparkles? Maybe but they’re adorable and another lure to buy the book in my opinion. And I say this being a dog person myself, Schmidt is obviously a cat person. But, when I say that, I mean he just likes cats and is not, in fact, an escaped experiment from the island of Dr. Moreau.

Doomed Moviethon is an absolute blast and I’m sure you can probably tell I had a good time with it. Once again, his other constant companion, his wife LeEtta, has done the cover art and I have to say it’s my absolute favourite of the three covers she’s done for her husband. A more minimalistic approach with a colour wash leading down to Richard, LeEtta and the two cats on a sofa... and also a wonderful back cover illustration which is the exact reverse of that, where we are looking at them from behind and see some of the items on the wall where the TV they are watching is. Yeah, this is a really great cover and, as I said, a really great book full of humorous commentary about a whole bunch of films, some of which you’ll probably be familiar with and some... maybe not so much. This one is as good a jumping on point as either of the other two (I don’ think these moviethons are strictly chronologically presented and probably interpenetrate around viewing sessions in other books) and all are worth a look if you are into things like horror, giallo and exploitation films... among others. Also, anybody who loves Josie And The Pussycats as much as I (it’s one of the greatest movies of its decade) really deserves huge sales for going on record and defending that magnificent and mostly misunderstood movie in print. Definitely give this guy some of your time and money and also look him up at http://www.doomedmoviethon.com and also https://doomedmoviethon.blogspot.com.