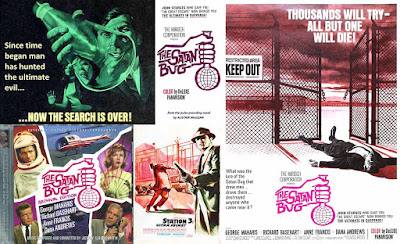 I mentioned recently in my review of The Andromeda Strain (which you can read here) that The Satan Bug was another of those great virus themed movies I’d never seen which, given that I am writing this in a semi-lockdown status in the UK during the coronavirus pandemic, is perfect viewing for this time. I also didn’t realise that Alistair MacLean, under a pen name, had written the book on which it was based and nor was I aware that one of the co-writers of the script was none other than famous novelist James Clavell (who also wrote the screenplay to the original version of The Fly, if memory serves).

So I managed to get a US Blu Ray sent over and, I have to say that, while the film isn’t exactly perfect, I was much more impressed with it than I thought I would be.

One of the reasons for that is Jerry Goldsmith’s score for the film, of course, which starts the movie off just right as we go into one of those animated title sequences which could almost have been designed by Saul Bass (but wasn’t, it was by DePatie-Freleng). It’s edgy and sinister with the perfect music to push the kind of expressionistic simplifications of an animated virus depicted and certainly gives you a sense of foreboding before going into the main film...

And then, once we start the movie proper, we get some fairly typical clean looking but interesting 20th Century Fox style art direction and cinematography. I don’t know why all films in this widescreen aspect ratio by this company at the time felt like this but it certainly has a recognisable style and it actually helps with the sterile, laboratory settings of the opening movie.

The plot is simple. We start off with an extremely restrained, almost abstract in what it doesn’t show, heist on a lab (relocated to America for the movie version). After a diversion as special agent Lee Barrett (as played by George Maharis) is recruited to help out as a consultant on the robbery and its fall out, we are made aware by co-star Richard Basehart (who you might remember as the Admiral in the TV version of Voyage To The Bottom Of The Sea) of just how dangerous The Satan Bug of the title, which the robbers have escaped with, is.

After this, the shenanigans begin, as a psychopathic terrorist holds the world to ransom unless all war research finishes (or some such) and Lee, aided by such great actors as Dana Andrews, Anne Francis and Simon Oakland, has to try and track down where the various lethal viruses have been taken before, after witnessing the death of everybody in Florida by a milder stolen virus, Los Angeles is taken down the next day. At this point the movie kind of devolves into a standard track and chase adventure as the 'good guys' rush to keep this from happening but it keeps up the atmosphere of slow burning anxiety for most of the film although, I’ll be honest, the film does start to drag somewhat before its conclusion.

However, there is a lot which is brilliant about the film. Jerry Goldsmith’s pulsating and driven score is one of those things. Like a lot of his films where the director actually listened to him, the film is quite sparsely ‘spotted’, Goldsmith was a master of knowing when to hold the silence and only bring the music in when it was really needed... it’s mostly great stuff and you can totally hear how he would develop into his brilliant Planet Of The Apes score just a few years later. He uses those wonderful musical phrases throughout too which, I can’t really pinpoint in terms of an accurate musical reference, since I really don’t know much about music but I always think of it as his ‘bouncing ball drops’. Little musical phrases of repeat notes which last a few seconds but which get faster as they go and which remind me of a ball dropping and the thuds getting faster as they hit nearer the ground on each bounce. Sorry, that’s the only way I can think to describe it but he uses this kind of musical phrase on a number of his scores from around the period and I can always tell it’s him when I hear them.

Also, those shot set ups early on in the first twenty or so minutes of the film where everything is confined to the labs look absolutely gorgeous. It’s all so well lit with lots of pinky oranges in the lighting schemes to add contrast to the dull, clinical whites and, on occasion, the shots will cut to offices with wooden panels which pretty much mirror the same colour scheme. Since the majority of the labs are made of glass walls, we also have shots mostly made up of vertical struts which Sturges uses to split up his canvass and highlight various characters in their own slats of the screen. Again, he does this with other environments too and where a glass door may slide open to push the emphasis of one of these rectangular slabs that comprise the frame design, he will sometimes cross-cut to a shot of a solid door (such as a vault door) in another room being opened in exactly the same part of the screen. Nice stuff and it was this ‘crowded verticals’ pitched against the later shots of lone or small groups of standing figures against a sterile, US highway desert landscape that kept me interested throughout.

So... lots of visual hooks and musical candy to engage the brain for most of the film.

There are a few clunky bits too though and I especially got annoyed with something George Maharis says into a phone at one point. Interestingly, the two deaths at the start of the movie in terms of the heist sequence show no bodies or aftermath... it’s all alluded to by other characters and the focus of their attention is kept out of shot. However, when Maharis and Anne Francis find a dead body sunk and weighted down (presumably) in a swimming pool a little later, Maharis reports that they found someone... “floating at the bottom of the pool.’ Seriously? If they’re at the bottom of a pool then they’re really not floating are they? And this was written by James Clavell?

One thing which did cause me delight though was spotting some of the smaller actors who would later become much more well known. For example, a young James Hong plays one of the doctors seen at the start of the movie. It doesn’t amount to much more than a cameo but it’s nice to see how he looked back then. Similarly, one of the agents who is following George Maharis and Anne Francis when they have been captured by ‘the bad guys’ is none other than James Doohan, literally the year  before he would become a household name playing Scotty on the very first incarnation of the Star Trek TV show. It’s interesting that he has a bit of a role to play but, since actors are payed more if they have any lines to say, he manages to remain silent throughout... even though he both gets into a gunfight and then has a dramatic moment where he drops dead when exposed to a virus. It was nice to see him in a pre-Scotty role though. And, yes, a waitress in a jazz bar near the start of the film is a young Lee Remick.

And that's pretty much all I’m going to say here about The Satan Bug (or risk getting into spoiler territory)... nice shot design and lighting, a highly competent ensemble cast, some truly catchy music and, as it nears the end, maybe just a little bit dull in places. I loved it though and am planning to be watching this again some day. A good slice of mid-sixties cinematic treasure which is well worth the time of any fan of the cinematic arts... so check it out when you’ve got a moment. Watch it during a pandemic for an extra sense of authenticity.
Posted by NUTS4R2 at 11:32