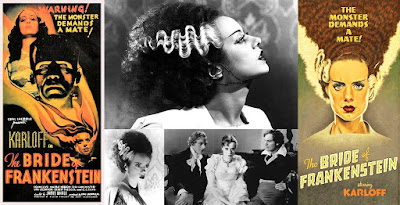 Time to revisit one of the great classics finally on Blu Ray.

After a cast list which bills, like the end credits, the titular character of The Bride as being played by ‘?’ (much like Karloff in the original, to preserve the mystery) we get a camera moving in to an establishing shot via a model building where we get a quite wonderful (and heavily pre-cut due to sexual implications of both a verbal and visual nature), prologue featuring Lord Byron, Percy Shelley
and, of course, the character of his wife Mary Wollstonecraft Shelley, who wrote the original novel Frankenstein and who is played here by the ‘button cute’ Elsa Lanchester. It is for this role, relatively near the top of the cast list, that Lanchester is credited for, as opposed to her iconic dual role as the Bride Of Frankenstein. Also, since her first character is only on screen for five minutes at the start and her classic monster character only for about five minutes (without bandages) at the end, I think many audience members probably don’t put two and two together in regards to this fact the first time they see it... especially since the make-up is quite different.

Towards the end of the prologue is a montage of scenes from the first film (where Franz Waxman’s amazing score really drives the edits together as a unified whole and which, if memory serves, might even include alternate or unused snippets from Whale’s previous Frankenstein movie too) and then Mary is coaxed into telling Byron and Shelley the rest of the ‘continuing story’ (despite the fact that a tombstone in the film has a death date many decades after Mary died in real life).

And the rest of the film is half some unused parts from the original Frankenstein novel dressed up in new clothes (the book does, indeed, deal with the creation of a ‘bride’ too), along with the usual Hollywood nonsense, some successful and some not so, which can be completely credited to director James Whale who, at this time in his career at least, had complete control of the film.

It’s an interesting film and uses some great lighting effects too (if you watch the films of Ridley Scott, there’s a certain kind of lighting he uses in a lot of his movies... the name of which escapes me... and certain scenes like the interiors of Baron Frankenstein’s home use the same effect) and there’s also the odd hint of German Expressionism again which grows organically from the sets... not as much as it would become a dominating factor as it does in Son Of Frankenstein, perhaps but... it’s definitely in here.

There’s some wonderful acting in this one. Much to Boris Karloff’s dismay, the monster learns to talk this time around, due to his investigation of the siren call of the violin played by an old, blind hermit (played by O.P. Heggie) who befriends him and teaches him rudimentary speaking skills... as well as teaching him how to smoke (can never quite work out how that’s ‘a thing’ to teach anyone but what do I know?). Karloff is absolutely electric in these scenes though, never once going into comedy mode although, you can tell that certain elements of Fred Gwynne's Herman Munster must have come from studying his performance in this film.

Then there’s the somewhat campy Ernest Thesiger playing the equally campy Doctor Pretorious, helping to push the less than hidden ‘gay subtext’ of the movie, which would quite possibly have gone over many of its audiences’ heads at the time. Alas, he also dominates in the one scene which seems completely out of place in the film, where he shows Frankenstein the collection of miniature people he’s grown in bottles. This is the one scene in the movie I almost can’t bear to look at because it’s so off kilter with the rest of the film (but at least Waxman’s music is appropriate... it’s also out of place with the rest of the score in this scene). In fact, going to skip quickly over the memory of this sequence now, thanks.

One of Whale’s favourite ‘doom laden comedy hystrionics’ actresses, Una O' Connor, who had provided similar laughs in the director’s The Invisible Man (reviewed here) also has lots of screaming to do, along with such dialogue nuggets as, when talking about the probable burning of the Frankenstein monster under the mill (wrecked at the climax of the last film)... “Insides is always the last to be consumed”. She also gets the first of the ‘He’s alive!’ lines when talking about the ‘presumed dead’ character of Henry Frankenstein, who has been removed to his and his fiance’s home, in relation to when he first moves his arm and indicates he’s alive. Of course, this completely contradicts the happy ending added on to the film at the end of the last one against Whale’s wishes but, I guess he was happy to ignore it here. Frankenstein is once again played by Colin Clive (two years before his alcoholism fuelled death at the age of 37) but his fiance is played by the then 17 year old Valerie Hobson, who really gives her all in the role.

And, though he had already been killed by Karloff in the last one, we have wonderful character actor Dwight Frye returning as a very similar character called Glutz. It’s always good to see Frye in any Universal movie, to be honest. Even a young John Carradine turns up briefly as a woodsman, foreshadowing his involvement, perhaps, with The Mummy films and also his turns as Dracula for the studio in two of the Frankenstein sequels.

The film was quite heavily trimmed before general release for scenes of religious inappropriateness and sexuality (such as cutting out various sequences which included close ups of Mary Shelley’s cleavage in the prologue and, originally, in an epilogue which also didn’t make it into the final cut) and... I just wish the footage had survived today. Even now, where the script had been censored, you can see where Whale ‘got away with it’ in certain scenes. There’s a great line by Dr. Pretorius where he tells Henry...

“Leave the charnel house and follow the lead of nature... or of God, if you like your bible stories”.

This second part of the line is said with great sarcasm and it’s pretty apparent what Whale’s stance on religion is. What I’d forgotten until rewatching the documentary which has been ported over from some of the DVD releases onto the new Blu Ray, is that the original line before the censors got a hold of it finished... “... or of God, if you like your fairy tales.” It doesn’t really matter though because Thesgiger’s line reading leaves you in absolutely no doubt of his religious standing.

And then there’s the music by composer Franz Waxman. This is what I was always drawn to with this movie, not because of its brilliance here but because I was familiar with it from the many times it was recycled by Universal into other things, like many of their serials. I first heard this score in the Buster Crabbe Flash Gordon and Buck Rogers serials and, whenever I would go out into the back garden and play at being one of these two iconic heroes, I would be constantly whistling the score from Bride Of Frankenstein as I played, even though I didn’t know that at the time. It’s very much in the leitmotif style which was becoming increasingly popular in Hollywood and it’s just wonderful. LaLaLand Records managed to resurrect and restore the long thought lost master tapes of the majority of this score last year for a limited edition CD release, which sounds surprisingly great for the age of the recording. You can still, at time of writing, purchase a copy from them in the US here. It’s not only been used in numerous Universal films and serials contemporary to this, it’s also been used in terms of film referencing over the years... perhaps the most blatant being the use of the ‘creation’ music in a parody sequence in Joe Dante’s Small Soldiers. If you’ve never heard it before, well... it’s just wonderful. What I hadnt noticed before is the moment in the opening credits where it says it’s conducted by Bakaleinikoff, who did a number of scores such as those for Val Lewton, whose ‘antidote’ to Universal Horror’ movies for RKO are also very much respected.

And there you have it. Bride Of Frankenstein is one of those rare movies where the sequel actually is superior to the original work... in this case by the same director. And I say that with all due respect to Frankenstein (reviewed by me here) which is a truly great movie too. Definitely this and the two Frankenstein films either side of it are required viewing for all those in love with the art of cinema. And very entertaining they are too. Give them a watch.
Posted by NUTS4R2 at 17:34