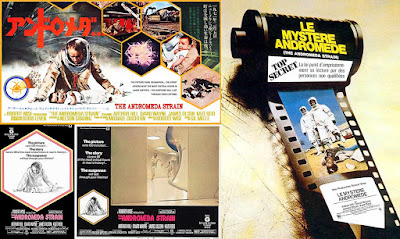 The Andromeda Strain is a movie made in 1970 which had a delayed release in 1971 and it’s one of those films which was always on television when I was a kid in the 1970s and which I’ve been meaning to catch up to now for years. It’s also a film which I confuse with another super-virus film I’ve not seen but which also played on 1970s television with alarming frequency, The Satan Bug. Now I have the scores from both these movies but I’ve never been able to give either of those scores context until now... with the release of Arrow’s Blu Ray restoration of The Andromeda Strain (I’ll have to pick up the other movie at a later date).

I hadn’t even realised it before picking this new version up but the film is directed by Robert Wise... one of the most famous and accomplished of American directors, in my opinion, who never really seems to have much of a signature style from project to project that I can detect. So he edited Citizen Kane and directed such famous films as The Sound Of Music, West Side Story, The Day The Earth Stood Still, Star Trek The Motion Picture and, of course, my favourite horror movie, The Haunting (which I reviewed here). So, by the time I had the disc in the machine, I was really looking forward to this one.

And... it’s a film that starts off strong but, although it has a lot of suspense built into it... does kinda run out of steam towards the end, I feel, for reasons I’ll try to make clear later.

It starts off with some textual information that the film is based on true information etc, which is completely false since Michael Crichton, who wrote the novel on which the film is based, freely admits to making it all up and the jargon written for the scientists to talk about in this is, it would seem, equally imaginative. Following this we have a very in-your-face opening title sequence where various bits of typography giving ‘document information’ is collaged with the various credits bombarding the audience while composer Gil Mellé’s melange of crashing electronic tonalities come hurtling in to create an equally violent but appropriate assault on the ears.

This is followed by a sequence in a desert where two men go to check out a small village (with a population of 62 people) where something is obviously very wrong. After they start heading towards the community, Robert Wise does a very smart thing and we then cut to the military outpost where the two are radioing in all that happens to them. We don’t see these two men again... just hear them as they encounter body after body before they die themselves, victim to an alien virus which has crashed down to Earth on one of our satellites. However, because it’s all done with the sound of their voices and we just observe the various men in the room receiving the broadcast and their reactions to it, the scene is rendered a lot more dramatic and scarier than if you had just seen two men collapsing.

Then, after a mad scramble as four crack scientists, all strangers to one another, are commandeered by the military, we see two of them, played by Arthur Hill and James Olson, go into the dead village in special suits and we see them explore the corpse ridden community. The director keeps splitting up bits of screen and has moving, fragmented images showing you what the two are seeing as you also follow them on separate, simultaneous windows... like a huge split screen sequence gone wrong with portions that slowly move around on their own... this is quite an experimental, expressionistic film on Robert Wise’s part, I would say.

After finding two survivors... a crying baby and an old, drunken man... the two bring them back to the base station which makes up the setting of the majority of the rest of the film (apart from the odd insert sequence). It’s here they are joined by the other two scientists played by David Wayne and Kate Reid. There’s another nice bit of expressionism as these two go down in an elevator and the screen splits to show each of them on either side of a diagram of the elevator tracking their progress.

The facility they are in takes the form of five big circular floors underground, each one at a different level of decontamination as the last. I’m surprised no mention of Dante’s five rings of hell is made in the script, to be honest. Especially since the next 15 to 20 minutes shows them spending almost a day going through five separate sets of decontamination procedures (including a six hour rest break) to ensure that, when they arrive on Level 5 (the deepest level) where they will do their job to determine the nature of the virus and just how to deal with it, they are as germ free as possible.

Now the film is interesting because it does its utmost, despite the quite expressive use of split screen and constant reference to diagrams and recorded images, to present the film as almost a fly on the wall documentary and... it’s a neat tightrope that Wise manages to walk to actually get the film to succeed on this level for so long. Indeed, it’s where the dramatic story set ups are introduced early on in the film that really let things down because, frankly, it just keeps telegraphing itself in the most obvious ways. For example, it establishes fairly early on that the character played by Kate Reid has trouble with red, flashing lights so you just know that, at some dramatic point in the film, she’s going to throw an epileptic fit.

Similarly, a lot of fuss is made about James Olsen’s character (who I last saw being similarly deadpan as the main hero of Moon Zero Two... reviewed here) being ‘single’ and so being the one entrusted with the special key which disarms the nuclear device when the base goes into self destruct mode to stop any virus from spreading (which in the case of this one, as it turns out, would only make the virus stronger). So you kinda know there will be a dramatic countdown chase as Olsen is trying to stop the self destruct sequence from running and, sure enough, this sequence serves as the climax of the movie. By this point, though, the transparency of these dramatic devices coupled with a lack of real tension in the last third of the story kinda makes for a dull movie by the end. Which is a shame because lots of this movie really works... it just doesn’t maintain the tension towards the finish line and seems somehow anti-climactic.

That being said, though, Gil Mellé’s score, which I mentioned earlier, is really great. There’s not much of it and it’s sparsely spotted, with the score kicking in to highlight the odd bit of drama or ‘information’ but it’s effective and also, as far as I’m concerned, a great listen away from the movie. As far as I know the original, full movie masters have been lost to time for this score but the short 10 inch, hexagonally shaped (as is the virus when magnified) vinyl release from 1971 must have pretty near to all of the music on it anyway and the limited edition Intrada CD from a few years ago uses this recording. It’s a wonderful example of synthesised abstraction with the occasional stab at melodic backing and rhythm... it’s pretty good away from the images (and is probably still my best take away from the movie).

Not much more to say about The Andromeda Strain other than Robert Wise certainly provides us with an interesting film and the use of extreme contrasts in sound and some interesting image choices still make for an enthralling experience for a lot of the running time. If you are a fan of this director’s work then I would certainly recommend you check this one out. Especially in this nice Arrow Blu Ray restoration which has the usual plethora of good extras (which, alas, I haven’t had time to watch) thrown in with it. Certainly if you are going to grab a copy of this film, the Arrow version is the route to go down so, if you have a hankering for an alien super virus movie in this time of government lockdown and self isolation, grab this one while it’s hot, would be my advice.
Posted by NUTS4R2 at 17:29