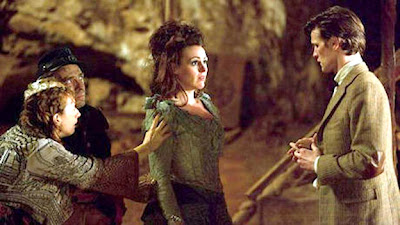 And all who sail in her...
Doctor Who: The Doctor’s Wife
Airdate: May 14th 2011. UK. BBC1
Warning: Here be spoilers... so if you’re Steven Moffet, definitely don’t read anymore of this.
Well that was quite a bit better than a kick in the Krynoids!
This weeks episode was written by a stalwart of the fantasy genre, Neil Gaiman, possibly best known for his 75 issue comic series for DC/Vertigo... The Sandman. And best loved by me for the creation of one of my favourite comic-book characters Death (Oh come on! Who can’t resist a cheery young lady in black... even if she has come to take you to your final resting place?).
Now I’ll have to admit I was sceptical when I heard Gaiman was writing an episode of the good Doctor’s travels because, frankly, I’m not sure his writing necessarily translates well on the screen... he writes with a very deft touch and you need a director, actors and a whole bunch of other people to work some similarly subtle magic to bring his words and concepts to life without them falling flat and... well... um... falling flat. :-o
The past couple of weeks of the show have not done anything to reassure me that the production crew were able to match that kind of subtlety. I knew the principal actors could and so I wasn’t too concerned about them... but I was unsure about whether the tone and editing would be able to match what I expected to be an incredibly subtle script.
Well I’m more than happy to say that I this case I was proved dead wrong. Thank Rassilon’s teeth for that then. Phew. This is probably the most refreshing and watchable episode of Doctor Who I’ve seen since... hmmmm... maybe The Lodger. Oh well, hang on there that wasn’t all that long ago I’m sure I can do better than that. Scratches head... thinks a bit more... no The Lodger was about right. There were some definite hits as well as the molasses of misses last season and fair is fair.
So anyway... this episode is special because you get to see the TARDIS’ soul transplanted into a human shell and The Doctor is trapped with her in a junkyard on the edge of the universe while Amy and Rory are trapped in the shell of The Doctor’s TARDIS who is having deadly fun with them, running them around corridors and playing mind games. However, the real spirit of the TARDIS is housed in a rapidly failing humanoid host and it’s a race against time to somehow catch up with the old Type 40 shell... which has gone off gallivanting around our universe in search of other TARDIS' to feed from... and replace the soul of the TARDIS, rescue Amy and Rory from both the malevolent force inside the TARDIS and a rampant Ood (Ood have thought that we’d be seeing a villainous Ood again, ay?) before time leaves our heroes high and dry and dead. And dead is not much good I’m afraid... have TARDIS, will travel.
And that’s all I want to say about specific plot details this time around (but really, isn’t it more than enough).
I was a bit disappointed at the start of the episode as a distress beacon cube which came a knocking on the Doctor’s TARDIS door was, frankly, a terrible looking cheap effect and I thought that could have been done a lot better... maybe it was a little reference to the good old days of the BBC in the 80s (when the special effects seemed to get even more pedestrian than the not so brilliant effects work in the 60s and 70s) but once this little sequence was out of the way it was “all systems are go” for the special effects and the story they were there to support was a really nice addition to the Doctor Who episodes of the show that will probably be really affectionately remembered in years to come. Like Blink, The Girl In The Fireplace, The Mind Robber, Tomb of the Cybermen and The Talons of Weng-Chiang (to name a few of my favourites).
There are some very touching moments where The Doctor and the living personification of his TARDIS are conversing in the junkyard and it really adds a new spin on the old, almost used up idea of The Doctor stealing the TARDIS. The TARDIS apparently chose him and stole him, leaving herself unlocked so she could shanghai the willing timelord and see the universe. Nice concept... I like it. Some may say that this kind of revisionism smacks of "Greedo shooting first" but, what the heck! It was delivered with such sentiment and feeling that I was really sold on the concept. Well done Mr. Gaiman (or possibly Mr. Moffet, depending on whose idea that was)... that really worked out rather well.
And as an antidote to that, the mind games played on the TARDIS with an old, hateful and vengeful Rory and the writing on the TARDIS walls (which one can only presume was an homage to The Shining) was almost as chilling and foreboding as an episode of The Deadly Assassin. Well no, alright, not quite then... but as close as we’re probably going to get in this era of over-censored, dumbed down television.
So all in all I was completely bowled over this week. Really great episode. It’s a shorter review this week due to there being nothing much for me to grumble about I guess? That’s okay, less typing for me and now there’s nothing to do but go over to Hypnogoria’s and Flaysomewench’s blogs and read their latest Doctor Who reviews... because their insights are always different from mine and always house a little touch of genius. Check them out as soon as you can... they’re well worth a look.
Posted by NUTS4R2 at 20:12