Crypt of the Vampire 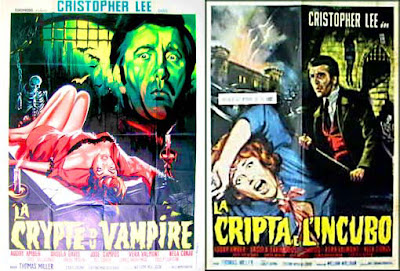 Postcrypt
Crypt of the Vampire (aka La cripta e l'incubo aka Terror In The Crypt) Italy/Spain 1964
Directed by Camillo Mastrocinque
Retromedia
Region 0
So once again I find myself watching another Karnstein movie... that is to say, another movie which is an adaptation of Sheridan Le Fanu’s short story Carmilla. Though you wouldn’t recognise it to begin with.
Christopher Lee stars as the head of the Karnstein family who has a vampirish fiend in his household (or maybe that should be castlehold) preying on his family and friends in a movie that pre-dates Lee’s regular studio Hammer’s first attempt at a Karnstein movie, The Vampire Lovers (reviewed here) by a good six years.
The film is nicely shot in black and white but this is going to be a pretty short review methinks because, really, it’s only the consummate acting talents of Christopher Lee (which really shine when he’s surrounded by people who just can’t deliver lines very well) and the sometimes wonderfully designed shot movements and transitions/juxtapositions that can be recommended. It’s not a great version of the original source material that’s for sure, not nearly as good as the first Hammer outing with Le Fanu’s characters, and it starts off very similarly to a lot of those early 1960s Edgar Allan Poe “adaptations” shot by Roger Corman. If it wasn’t for the black and white photography and the less than stellar looping/dubbing on the soundtrack, it could easily pass for one of those films... especially in the acting stakes. Although, to be fair to the “Corman does Poe” films which I love, those particular movies do have a lot to be recommended when viewed at their correct aspect ratios.
For most of the film the finger points suspiciously at the one person who readers of the original will know is definitely not the vampire... right up until the film’s final reveal when the bleak atmosphere of the denouement is tempered with a “happily ever after” postscript scene tagged on at the end to help liven up the audience. In fact, the double ending where the culprit is done away in two places at once cross-cut (don’t ask and I won’t spoil) is the only part of the movie where some of the action actually takes place in the crypt mentioned in the title. I was wondering about that bloody crypt all the way through this movie.
This isn’t to say the movie is complete rubbish (although that might have been a more fun watch). It’s certainly effective with some moody atmospheres maintained throughout and a certain similarity in style to a much more famous movie by maestro Mario Bava, his horror masterpiece Black Sunday (Mask of Satan etc or whatever title you happen to know that film by). Similarly, Crypt of the Vampire is a movie filled with beautiful women and lots of walking down corridors with wind and lightning... although it has to be said that some of the sequences in this one belong more to something Dennis Wheatley might have written as opposed to Sheridan Le Fanu.
It’s hard to be too critical because even at its clunkiest, the film tries hard to make up with sheer enthusiasm what might be lacking in the technical ability of a lot of the cast. Christopher Lee certainly lights up the screen with his smoldering presence and there is one genuine scare at a funeral service taking place within the castle which goes own like this: Various people are in attendance watching over the coffin with a recently stabbed-to-death lady in it. Thunder and lightning starts up and visibility in the castle flickers between pitch black to light as the storm continues to rage... making it just as impossible for the audience watching the movie to see certain parts of the screen as it does the characters in the film. At one point, after a brief second or two of pitch black, the coffin is lit up briefly and the woman inside is sat up and pointing an accusing finger at her apparent murderer... she’s back down again when she’s lit up again but the effect on the viewer (at least this one) is genuinely unsettling in this little sequence.
So while I can’t quite recommend Crypt Of The Vampire wholeheartedly to many readers of this post, I will say that for fans of gothic horror, old AIP flicks, Karnstein movies or Christopher Lee fans in general... you might like to try out a little time in the Crypt Of The Vampire... just don’t make your expectations too high on this one.
Posted by NUTS4R2 at 15:41