Doctor Who: The Rebel Flesh 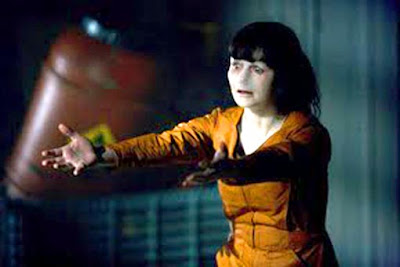 Okay... this is going to be a quite uncharacteristically really, really, really short review this week.
Why?
Well because we had the first of a two parter which, while not terrible (and therefore not that grumble worthy) was also just kinda so so. Still not really sure how I feel about it to be honest.
The show started off on what was, for me, a real howler of a bad CGI establishing shot and this was rapidly followed by a series of sets which looked like they were just old sets from the Eccleston and Tennant years redressed... to be fair to them, of course, it would surprise me if most episodes didn’t redress old sets but my problem with this story was that everything looked so darned familiar. Even down to the life-making tanks which... oh, okay. No spoilers this week I think... since I’m not going to be saying too much about this one... lets just say that these particular things and their final end result reminded me too much of modern series Sontaran technology... and lets leave it at that.
This story suffers from pretty much something which lots of US made movies have been suffering from just lately... that is to say they’re recycling old 50s plots and this one felt very much like that... I guess it’s probably true though that there are no new stories left anymore. :-(
The plus side though is that it also felt a little like an old late 70s or 80s episode in that the settings were less than spacious and studio ridden with much running down corridors and a “them versus us” kinda mentality... other recent examples of this in the show would be Tooth and Claw, The Impossible Planet/The Satan Pit, 42 and The Doctor’s Daughter. Not my favourite kinds of stories but, then again, I didn’t complain when Tom Baker was running around and doing such stuff so I can’t really complain about it now.
I don’t have much I can complain about other than a really obvious cliff-hanger which you will have figured out about ten minutes into the story... and may or may not be a help when it comes to the events we saw at the opening episode of this particular series. This could be one big set-up or... you know... maybe not. It gets kinda tiring to even attempt to second guess Steven Moffet’s game plan... let alone the writers who are presumably trying to incorporate elements of that game plan without sacrificing their own stylistic stamp. And I have to confess that another reappearance of “mysterious eye-patch lady” has become a bit underwhelming... hopefully I’ll get more enthusiastic in a couple of weeks when we presumably get introduced to her properly.
But as I said at the beginning of this teeny-tiny review... it’s not a terrible episode... far from it. There were some fine guest stars which we all recognise from previous genre TV shows and they all did good... and Rory had a lot more to do and a more interesting, three-dimensional side to his character than he gets the chance to run with in most episodes... other than die and come back from death yet again (how many times are they going to do this?). Does anyone else think that Doctor Who is getting a bit like South Park these days?
“Oh my God, Amy. They killed Rory! You b*stards!”
Best to remember that this one was the first of a two part story which looks like it could get a lot better in the next part (fingers crossed) and it was a solid and fairly entertaining episode of the show... but nothing special I feel. And I don’t know what the “internet-buzz” (gosh, how I never want to use that term again) is like on this weeks show but personally I’m finding it hard to work up any fire or passion, one way or the other, for this weeks stab. One thing I will say though is this... Neil Gaiman’s a hard act to follow so cut them some slack.
And with that, all that’s left for me to do is to apologise again for the shortness of this weeks review and... to paraphrase a TV theme song which a couple of my readers may remember from their childhood... “turn of my television set and go and do something less boring instead.”
Posted by NUTS4R2 at 20:34

Labels: Doctor Who, The Rebel Flesh