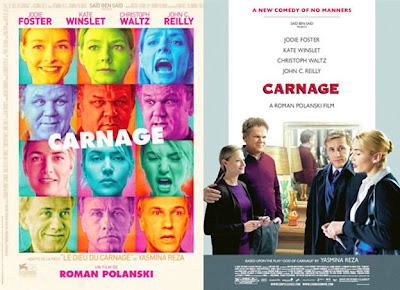 Roman Quartet
Carnage 2011 UK
Directed by Roman Polanski
Screening at UK cinemas.
Okay... so here we have yet another movie called Carnage. As though we didn't already have enough movies called exactly the same thing. This one’s directed by Roman Polanski and co-written with him together with Yasmina Reza, who wrote the original play on which this movie is based, Le Dieu Du Carnage... which is possibly the title they should have gone for here (or at least an English translation of it, since it’s shot in the English language) instead of giving us a movie called the same name as many other movies called... well, you know... Carnage.
Now Roman Polanski has always been a director I’ve found a bit hit and miss. When he’s good he’s great, churning out some cool movies like Repulsion and The Ninth Gate. However... when he’s bad... you get junk like Frantic.
Roman Polanski isn’t much of a draw to get me into a movie these days, I have to say, but the four lead actors in Carnage are all particularly good at their craft with one name in particular, that of Christoph Waltz... who has been largely wasted in Hollywood roles like the lead villain in the recent disaster that was The Green Hornet since his stand out performance (a long way into a very long and distinguished career as an actor) in Tarantino’s Inglourious Basterds.
Waltz is one of those actors who pretty much lights up the screen with his presence whenever he’s around. On top of this his three co-stars are Jodie Foster, John C. Reilly and Kate Winslet... so you know that no mater how bad the script is... you’re going to get some seriously interesting performances out of this people sharing the same scenes.
Luckily, in terms of dialogue at least, the writing fairly crackles, giving these four stalwart actors something really great to get their teeth into. It has to be pointed out though that, like a lot of movies based on plays, the piece does not greatly benefit from being translated into a work on film. Apart from an opening and closing sequence shot from the same angle, more or less, of a park, the whole movie is set in two rooms and two hallways from the same apartment, which is fine but, you really feel the confines of the camera trapped in the same sets in this one.
The four actors play parents of two children, one of whom has lost two teeth due to being hit in the mouth with a stick... which you see at the start in a small sequence that I expect was absent from the original play, which runs during the credits to Alexandre Desplat’s powerhouse score (which is only present in the opening and closing credits... there’s no room for music in the rest of the movie). The tone changes from pleasant and mannered to hostile and aggressive and lots of other things through the course of the play as one of the couples, played by Kate Winslet and Christoph Waltz, keep trying to leave but constantly encounter excuses and distractions which force them to stay in the building... much like the darkly magical curse of social manners which force the inhabitants of the house in Bunuel’s The Exterminating Angel to remain when they are desperate to depart... just not quite as much fun.
The film could best be described as a comedy of manners perhaps, rather than an exploration of the psychology of the four people trapped in the artistic space of the movie/play, but there is a certain level of fakery going on due to the confines of the environment and the plastic way in which every individual character gets their moment in the spotlight... which I found a little more distracting than I might normally find in something which has started off as a theatre piece. To be fair to Polanski, there are not that many “theatre into movie adaptations” which really escape the confines of their original setting and I’m not for the moment saying that there neccessarily should be. This artifice presented in this kind of way may be exactly the tone Polanski was after... I just feel that movies like Educating Rita did the whole stage to screen relocation a heck of a lot better than this particular movie did.
I’m not knocking the film though... it’s short and sweet and there are some laughs to be had from it. It’s not something I’d recommend that many people to see, to be sure, but it’s not a bad movie either and, frankly, when you get four actors who are this good trapped in a series of rooms together... well... you almost owe it to yourself to go and see what they come up with. And, to be fair to all involved, there were some nice shot compositions towards the end, on occasion, where the perspective was deliberately screwed by the juxtaposition of large and small elements sharing the same horizontal space... just not enough of that stuff to really hold my interest in it... at least not as much as the acting.
So Roman Polanski’s latest is not as great as, perhaps, it could have been but, honestly, I don’t know what kind of tone he was after so bringing up the artifice of the basic building blocks of the source material may not be the fairest way to go. A slight film but a fairly pleasant way to spend 80 mins... and Christoph Waltz is always worth watching.
Posted by NUTS4R2 at 19:17