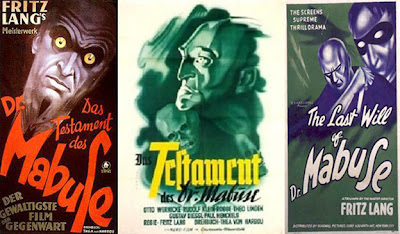 Warning: Spoilers beamed directly
into your mind if you read any further!

Fritz Lang made Das Testament des Dr. Mabuse as a sequel to his silent classic, Dr. Mabuse Der Spieler (reviewed here), 11 years after the original film was released. It again “stars” Rudolf Klein-Rogge as Mabuse but to say this actor is the main lead of this second film would be pushing it a bit. I don’t know if the actor was actually incapacitated during filming but he is barely glimpsed and doesn’t really move from his bed in the few shots he’s in.

The character also, kind of, dies not very far into the movie... although he lives on in two guises... one as a ghostly version of himself with a brain that is visible above his grotesque, popping eyes... all done via crude but effective special effects. Thus, anyone who’s ever watched this movie without having had the benefit of seeing the original movie before-hand will be left unimpressed, I suspect, with Klein-Rogge. The absolute masterful power and strength of will of this actor, that pierced the screen of the original movie and pierced the audience with a wake up call burnt directly on to the retina is really not present in this one. Mabuse is just an inmate of an asylum where he was deposited after he went mad at the end of the first movie.

Even though the character dies, Mabuse is not dead in spirit... he uses his ghostly presence after death to invade the mind of the head of the sanitarium and uses his body to continue his crimes which, in this movie, consist of bringing down the entire government by himself...

Or, you could also take the tack that the head of the sanitarium has gone completely mad after reading Mabuse’s crazed and obsessive, compulsive scribblings and the ghostly presence of Mabuse is merely his own mind playing tricks on him... that he has gone completely insane and been inadvertently “inspired” by Mabuse and his writings of how to pull off “perfect” crimes... stepping into his shoes full-time after Mabuse has breathed his last.

There are still lingering shades of the German Expressionist style throughout this movie but, then again, I’m beginning to think it’s partially what defined Lang’s personal style at that particular period of his life. I remember taking a look at the Lang movie Rancho Notorious (1952) a couple o’ decades back and thinking that, although it was shot and released in colour... it all looked wrong or, to repeat my exact comment, it looked like it was a colour movie which had been lit for black and white. Perhaps it was the very striking areas of light and dark that were prevalent when I made that comment. Either way, long after German Expression is thought to have died off (or, in my opinion, fled Nazi Germany to find a new home in the 1940s Hollywood Film Noir style), here is Lang with some very interesting and almost surreal compositions... but supporting a movie which has a more naturalistic acting style and which, in some ways, continues the themes of the film he made directly before it, the Peter Lorre starrer M!

That is to say, that while the notorious criminal deeds and cliffhanger traps, such as two lovers locked in a room waiting for a time bomb to explode in an hour’s time, are reminiscent again and in some ways a toned down version of the antics of such characters as Fantômas and Irma Vep, the interest in police procedures and the science of detection is very much in evidence in this film (as it was in M).

The heroic figure of Inspector Lohmann, as played by Otto Wernicke, is an enjoyable performance but it’s been quite some time (over twenty years maybe) since I last watched M and I didn’t realise until I looked him up that the character of Inspector Lohmann, again as played by Otto Wernicke, is also in M... no wonder both movies look at the science of detection with an almost obsessive (for the time) bent... the film is a sequel to both Dr. Mabuse, Der Spieler AND M. So I’m going to have to grab a DVD copy of M now and watch that again. I do, in fact, have a painted comic book mini-series adaptation of M with a free flexi-disc (remember those) of Fritz Lang whistling In The Hall Of The Mountain King on it but... somehow I don’t think that’s going to quite cut it. I guess Criterion must do a decent version of it.... right?

Anyway, I have to say that, although the character of Mabuse himself was a bit of a cop-out in this one, the movie itself is an enjoyable romp through 1930s Germany and I was really quite into it. Definitely looking forward to the final installment of the Lang directed trilogy (other directors have tackled Mabuse since) entitled The Thousand Eyes of Doctor Mabuse (aka Die 1000 Augen des Dr. Mabuse) which was made 27 years after this one... especially since I know it has a pre-Goldfinger Gert Fröbe in it. I’ll let you know how that one goes down with me as soon as I can. Thanks for reading.
Posted by NUTS4R2 at 19:48