The Thousand Eyes of Dr. Mabuse 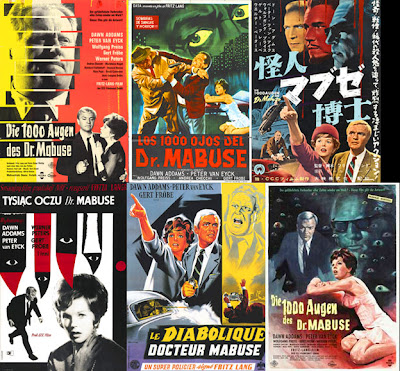 Eye Society
The Thousand Eyes of Dr. Mabuse
aka Die 1000 Augen des Dr. Mabuse
Germany 1960
Directed by Fritz Lang
Eureka Masters of Cinema Region 2
And so I finally come to the last of the three Fritz Lang Mabuse films... although the series was “continued” by other directors after this one, including entries by Jess Franco and Claude Chabrol in later decades.
Of course, the original Dr. Mabuse died in the previous of Lang’s Mabuse films, way back in 1933, and rather than bring him back from the dead, so to speak, Lang opts for a more realistic sequel by having a new “super-villain”, also a master of disguise, carry on in his name, this time by controlling his victims from his base in a hotel which is filled with thousands of cameras with which to watch his victims... the “thousand eyes” of the title.
This movie, at least when watching it now, seems to have little to really offer in the way of adding new or exciting elements to the mix. I am assuming that audiences contemporary to it’s initial release must have felt differently because the series really got some legs after this third installment, but there’s not much here which I can’t imagine audiences would have been that unfamiliar with... apart from an automated, revolving... no hold on... I’ll get to that soon. The murder of a man by firing at him silently from the window of another car and then leaving that car stopped at the stop light after his death as a way of hammering a point home visually, for example, had already been done in one or other of the earlier Mabuse films (and would go on to be done again in later films such as The IPCRESS File if memory serves me correctly).
I know a lot of people go nuts for what is, essentially, Fritz Lang’s final film as a director, but I found this one to be easily the least interesting of the Mabuse films I’ve seen so far (although I seem to have blotted the Chabrol version out of my memory... I think I had a severe anti-Chabrol reaction to that one at the time) and mostly I found it a little boring compared to the other two.
What I didn’t find boring, though, was Gert Fröbe’s performance as Inspector Kras, who once again is one of a smarter breed of movie policeman than you may find in other films of this nature... slow to catch the “modern Mabuse” obviously, otherwise you wouldn’t have any film, but less stupid than the way these folk are usually written in these kinds of thrillers and certainly smart enough to deduce the presence of a bomb just before it’s about to explode. Four years before playing Goldfinger in the Bond movie of the same name, Fröbe’s performance shows pretty good acting skills... nothing showy, just a character you can believe in, playing a very “aware of his surroundings” officer of the law. I wouldn’t be at all surprised if this was one of the movies that lead to his casting in the later Bond film and... no scratch that. I would be very surprised if the producers of Goldfinger hadn't seen this particular entry in the Mabuse series because... well I noticed something which I think might have caught the interest of the writers or producers of that classic Bond flick at the time...
In Ian Fleming's original novel of Goldfinger, the Aston Martin car (obviously not a DB5 at that point) was equipped by Q branch with various gadgets... but one of those gadgets wasn't a set of revolving number plates (with thanks to Tim Pelan aka @johnneyred for the confirmation that this particular item was not in the novel... it’s been decades since I read it). That was invented for the movie version... no wait did I say invented? Maybe I meant inspired... or put in as an homage to or, you know... craftily stolen for use in the Saltzman and Broccoli movie? For, as Mabuse is fleeing from Fröbe’s men and a police dragnet in a car chase at the end of the film, he uses the same style of automated revolving number plates as later turned up in the movie version of Goldfinger, four years later. It’s just a throw away shot and unless you did the maths then you might not think anything of it... but it’s my belief that when the casting people were screening movies of Fröbe so they could see if he was a good candidate for the role in the Bond movie, they saw a little something else they liked and nicked it for their movie too. That’s not gospel, of course, it’s just my supposition as to what happened... but I bet I’m right. I recall from various interviews over the years that a load of the Q sequence in Goldfinger was put in during extra reshoots after the initial filming was completed.
Other than this, though, there’s not a great deal going on in this movie that’s all that interesting, in my opinion and taking into account the historical context of the film. Not to say that there’s anything greatly wrong with this third entry either, of course. It’s well acted, well shot and... well... it’s Fritz Lang after all! I just thought that this movie could have been a little more than just the sum of its parts and I find this easily the weakest of the three in Lang’s trilogy. Don’t let that put you off from watching what is considered a cinematic achievement of some merit, however... and Gert Fröbe is always worth a watch.
Posted by NUTS4R2 at 20:40