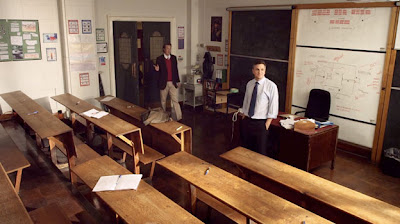 Class Action
Womble 2011 UK
Directed by Robert Pirouet
Womble, the latest short movie from Organised Chaos TV & FIlm (and produced by Michael Beddoes and Emily Smith) is a ten minute slice of classroom bound cat and mouse taking the form of an interview for a position at the school in which it is set. The film, directed by Robert Pirouet, features Ben Willibond and Will Smith (no, not that one!) as two men in an extended sequence of thrust and riposte as Smith asks a series of increasingly ridiculous questions with the intent of embarrassing and humiliating his interviewee as payback for what the former did to him at school many years before.
I was invited along to see the premiere of this but, at the last minute, had to decline the offer. Thankfully, I was given access to this movie via the internet so I could feed back my reactions to one of the producers.
Well, it’s certainly got a strong sense of humour about it and the writing is very direct and cuts to the jugular... it’s a ten minute short so it really needs to do this. Thankfully, the writing by both John Henry Falle and the director is artful enough in plotting a course through what could be seen as a bit of a tightrope walk between being too rapid for credibility and too slow for the way the short as a whole is paced.
The camera work is very clean and linear and the opening preamble, which is a rapidfire introduction to the general demeanour of Will Smith’s character, is followed by a couple of establishing shots which effectively get you into a position to digest a second and longer round of rapid fire with one or two more pauses to help you to recover your breath... before once again plummeting into a shot/cut/shot/cut rhythm focussing on the two lead actors as they perform a fun-filled battle of wits, Smith pouring on the questions and requests until it gets to a point where things take a refreshingly ridiculous turn.
The performances are all very good (there’s actually a cast of six players although most of the action of the film focusses on these two main players) with the two leads really giving their all to entertain and make credible the premise of the script. It’s not played in a naturalistic manner, to be sure, since it’s a comedy... but nor would you want it to be either. Comic timing is obviously something that these two guys know about and it’s a rare pleasure to see this duet going at it with a ferociousness that leaves the audience hanging on every word... very rare for me, in fact, because I rarely bother with comedies (if it’s not The Marx Brothers or Woody Allen then I’m afraid I’m a bit of an amateur in knowing how best to review this stuff... I wish I’d been able to see it with an audience, in fact).
The score, too, by Stephen Tait, is an extraordinary piece of composition considering its function within the overall scheme of things. Comedy is probably one of the easiest genres to screw up in terms of musical accompaniment, but Tait’s piece here is quite deftly handled... both supporting and lifting the emotional tone when required and then standing back a little and giving the dialogue and performance room to breathe when necessary. Nice job sir!
It has to be said that the “punchline” of the film, or pretty much the last word spoken, is a little obvious and can be seen coming from quite a way. However, this is all fine because, like a lot of films where this is also the case, it’s always a pleasure to see how the script and the performances are going to bring about this kind of ending and it does nothing to detract from the fact that the tone with which the last word is said (and, yeah, I’m so not going to reveal that here) could go either way... or, to put it another way, who out of these two characters is going to finish the movie with the upper hand.
Not totally my cup of tea in regards content and tone, this one but, with that caveat, I’d have to say that I did quite enjoy it and the obvious talent and skill both in front of and behind the camera really shows in such little details as the posters on the wall of the classroom and the design of the end credits. If you’re in to either short films or comedy... and definitely if you’re in to both, then it might be a good idea to check out this little gem if you can get some access to it. Remember the names on the cast list folks... I reckon they’re all going to go far.
Posted by NUTS4R2 at 18:43