Hands of the Ripper 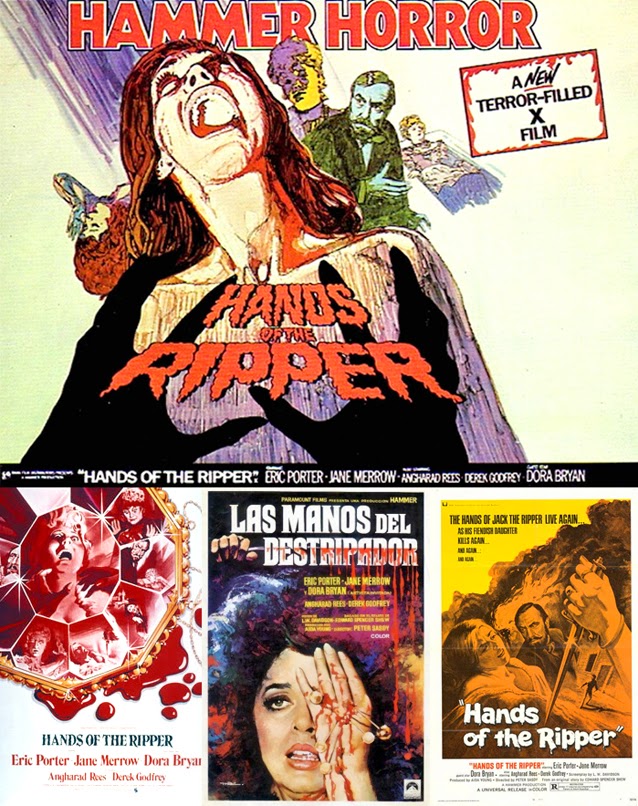 Okay. Now for some reason I have a strange block on Hands Of The Ripper, which turned up in the form of the new Network Blu Ray transfer at Christmas. The thing is, I can’t remember if I saw this as a kid or not. I saw a heck of a lot of Hammer movies on TV, from the age of around 7 years up to and around 14 years of age, when they were still shown regularly on British telly, and this movie certainly did ring a few bells at the back of my mind somewhere. I can’t say I honestly remembered anything specific about it though and, certainly, if it was something I watched on TV in the 1970s, then I suspect it would have been in a fairly censored version, if this uncut edition is anything to go by.

The film is directed by Peter Sasdy, who directed the first ever Hammer film I saw, Taste The Blood Of Dracula. This one is a strange concoction, though, and while it’s not something I enjoyed as much as the same director’s foray into the world of the popular vampire, it’s got a certain charm to it and the film isn’t wholly unremarkable... although it is a bit dull in places.

The film starts with the back story of one of the main characters, Anna, played throughout the rest of the movie by Angharad Rees but who is, in the opening sequence, depicted as a little girl in a cot. A man escapes an unruly mob by giving them the slip and returning to his wife and his daughter, the aforementioned Anna. He is, in fact, Jack the Ripper, and he murders the girl's mother in front of the daughter. The sequence continues as the opening credits play out with some rather dated and ultimately unpalatable freeze frames which stop the action whenever a new name appears from the cast or crew. Then we get into the movie proper...

It’s 15 years later and Dr. John Pritchard, played by Eric Porter, is accompanied by his son Michael, played by Keith Bell, as they attend a seance given by a character played by Dora Bryan. She has the grown up, teenage version of Anna representing “the spirit world” by talking as a ghostly contact through a grate in the wall and the illusion is easily seen through by the Pritchards, although one lady and her husband are besides themselves by the events they believe are transpiring before them. Once the party is over, so to speak, Michael Pritchard, who Keith Bell seems to be channeling the exact looks of Edgar Allan Poe for, takes a waiting cab to his stag do (he is getting married within the week) while Dr. Pritchard waits opposite the house with the seance for another carriage to come along.

Meanwhile, Dora Bryan’s character has taken money from a higher up member of parliament to have sex with young Anna. When Anna sees a shiny object, however, and is in close proximity (aka the “cuddle zone”) to someone who is getting a bit too intimate for her comfort, she goes into a trance and gets all stabby with people. Doctor Pritchard hears the screams and when he finds the stabbed to death Dora Bryan and the higher up official fleeing the scene of the crime, he seems to realise what is going on with Anna, to some extent... being as he is interested in the workings of the human mind and has been following the words and reputation of a certain Dr. Freud. So he springs her from jail the next day and asks her to live in his home... the same day that Michael’s fiancee Laura, played by Jane Merrow, comes to stay.

Now here on out it becomes a bit of a body count movie, with Doctor Pritchard constantly discovering Anna has just murdered somebody else and then having to dispose of each body and cover up for them as he can... including covering up for Anna too, who seems to have no idea or memory of what has happened once she’s gone into her trance.

The film is, it’s true, a predictable mess of clichés and, when we discover that Michael’s fiancee is also blind, we are just waiting for the scene to come when she is left alone with Anna and blindly trying to escape the... Hands Of The Ripper... so to speak. We seem to be waiting for certain scenes to appear throughout the movie for a lot of the time, it has to be said. It’s not a great film by any stretch but that certainly doesn’t stop director Sasdy from trying to be a little creative with his shot set ups and having fun with them and there are a number of instances of beautiful photography in the movie.

One of the director’s penchants, for example, is to sometimes have a vertical block splitting the screen just to the left of the centre of the shot. He even does this with people quite a few times and he’s certainly not afraid to have characters filling up the screen in mid-shot, creating the same off centre, vertical shapes as some of the other elements in the shots throughout the movie. Of course, this means he can then transcend to another shot and reflect these vertical blocks with something else in order to not jar the eye of the spectator as the sequences are cut together and this seems to work very well.

It doesn’t do anything to temper the general malaise created by Christopher Gunning’s somewhat less than typical Hammer score, though, which is not one of my favourite scores for the studio, to be sure. It somehow seems a little too subtle, almost, for the material and pacing that the director has created here. Perhaps, away from the confines of the film itself, it may be a little more robust and listenable but I don’t think it does the film too much good when pitched against the images, in all honesty.

Highlights of the movie would be the levels of goriness on display in this one, I guess. I don’t remember ever seeing a Hammer movie as bloody as this one and, though the scenes of violence are brief, they are effective and the old “Kensington gore” that the studio is known for gets a good work out here. The reveal on Dora Bryan’s character who the Doctor finds standing by a door, only to realise she has been affixed to it with a poker skewering her though her stomach as the door swings back into place with her still on it, is a nice little visual idea and the scenes where a “working girl”, played by none other than Open All Hours’ Lynda Baron, gets some knitting needles through her hand and into her eye ball as she tries to defend herself against the attack is another... if you’ll pardon the expression... eye opener in the movie.

Actually, Lynda Baron is one of the highlights of the movie for me and it’s great to see her as a younger woman in this, although the character she is playing, Long Lizzie Stride, makes no sense since Long Lizzie is one of the Ripper’s original victims (played by Susan Lynch in The Hughes Brothers go at the Ripper, From Hell, for example) and the film is clearly set 15 years after the original serial atrocities which have attracted so much interest in the intervening years. Indeed, anachronism seems to be a common feature in this film which seems to make mentions of the attitudes of Queen Victoria, even though she had clearly been dead for two years before this movie is set, the main body of which appears to take place in 1903.

Not a mistake, as such, but a disappointment, is the films climax taking place in the whispering gallery in St. Pauls cathedral... except you only seem to see one bit of fake looking wall and a shot down from a balcony which could have been filmed anywhere... which it turns out it was. The film’s producers had sought permission to film in St. Pauls, it transpires, but had been flatly refused, hence the ersatz nature of the clichéd but potentially effective finale. Which is a bit of a shame really because the film is quite watchable and nicely off kilter in certain places.

And off kilter might also be a good description of Eric Porter’s performance in this movie. He barely cracks a smile, playing the main male protagonist with a sense of someone with a void left in his heart. This lack of joyfulness of life is remarked on at one point by one of is housekeeperss and it seems to stem from whatever might have happened to his wife, who seems to be the only person not present in the family unit. Since he offers Anna one of his wife’s dresses, one can only assume that she met with a tragic end at some point before the opening of the movie, although I couldn’t detect any real reference throughout the film. I suspect there was either some footage cut or part of the script which explained the reasons behind Porter’s dour but effective performance left unfilmed and, therefore, not included in the final product. At least that’s my guess.

And there you have it. A movie which seems a bit of an odd fit in the Hammer filmography and, though not completely effective, certainly does have its moments and fans of the studio might well enjoy this one. The new Blu Ray transfer by Network is certainly a nice addition to the library, although I’m not 100% sure that some of the wispy cinematography is seen in its best in a high definition format, in all honesty. Still, definitely one to have if you want to spend some quality Hammer time with a movie which will probably slowly grow on you as the years go by. Not the best jumping on point for the studio’s thriller product and more as something which can be savoured and enjoyed once you’ve seen all their higher profile pictures. An acquired taste for the discerning fan, perhaps.