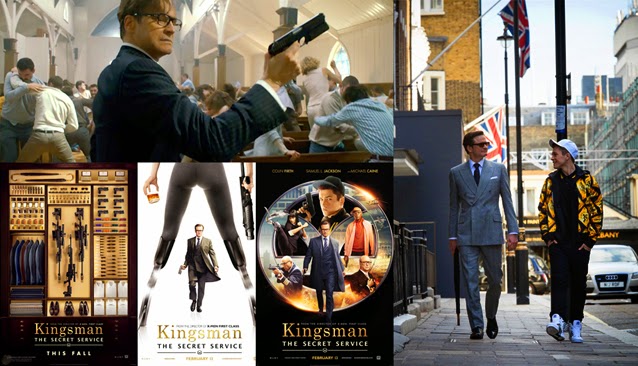 This movie is based on the comic book The Secret Service by Mark Millar and Dave Gibbons but, apparently, it’s a very loose adaptation of the source material. Unfortunately, it’s not one I’ve read so I can’t say how well it does actually do in that area but my understanding is that it’s just a couple of the ideas and three of the minor characters from the comic (and even those with some changes, apparently) which were the only elements finding their way into the movie. That being said though, it’s a much better film than I was expecting, based on the look of the trailer which, to be blunt, didn’t really sell it to me. I was pleasantly surprised, however, because the movie is smartly put together, has a great screenplay courtesy of the director and Jane Goldman, and is technically quite efficient while still being stylish and warm with the various characters and situations.

It’s also quite unusually edgy considering the teenage target audience it looks like its going for but... I’ll get to that in a minute.

Kingsman - The Secret Service is, unsurprisingly, an homage to the old Bond films and various other super spy movies of the 1960s and it certainly doesn’t let you forget about it throughout the course of the movie. The film is loaded with references to various fictional ‘spy culture’ phenomena and, when you see some of this stuff coming through in the trailer, it all looks like it could turn out to be a bit of a postmodernistic jumble leading to a huge mess of a movie. Well, I’m happy to report that, while the film is, indeed, a postmodernistic jumble, the various referential and nostalgic elements which the cast and crew use to their best effect are treated more like the ingredients of a fine meal... that is to say, it’s well cooked, holds together a heck of a lot better than you think it might under all that eclectic weight and, more importantly, tastes delicious.

That being said, there are a hell of a lot of the clichés you will also associate with this kind of film and, well... just a lot of rather obvious things in general. Without spoiling it here, you probably all know where the end game of the “pick a puppy” scene in the trailer is going to go, for example, and there are lots of little moments of the expected happening with the predictable 'pay offs' left developing for later scenes. It’s certainly very formulaic, perhaps as part of the modus operandi of the ‘homage factor’ at work in this movie but, equally, there are also a lot of little surprises throughout the movie which you won’t... well not always... see coming and, despite the predictability of certain elements in this thing, it’s all done so well that you really won’t mind that you’ve seen most of it before... it’s put together in such a way that you kind of want some of the more predictable rewards to come to light within the scripting anyway.

I say it’s a postmodernistic pot pourri of its influences and it does, I have to say, wear these on it’s digital sleeve throughout the movie. The fact that the cover for the entrance to Kingsman HQ is a tailor shop on Saville Row, linked back to the origins of the Kingsman group and the history they are given in the film, will probably ring a few bells with the audience. It harkens back to the early James Bond movies and the fact that director Terence Young had Sean Connery taken to a tailor in Saville Row for the suits for Dr. No (reviewed here). Another reference, among many, is the appearance of the Rosa Klebb style knife boot, popularised by that character in Fleming’s original novel From Russia With Love (in the book she kills Bond with it, only for him to be resurrected by popular demand in the next book, Dr. No) and, of course, brought to life in the film of the same title by Lotte Lenya (my review of From Russia With Love can be found here). Bond films are also the subject of a discussion between Colin Firth’s Harry Hart character and Samuel L. Jacksons super villain Valentine, played much better and much more ruthlessly than you might expect from the way the trailer has been cut together.

Valentine’s beautiful henchwoman Gazelle, played by actress Sofia Boutella (a male character in the comic books) has a pair of prosthetic lower legs manifested as sharpened blades with which she can accomplish all manner of gory violence... which she, of course, does. This in itself referencing a number of Bond villains of the past who have had a lethally enhanced handicap ostentatiously transformed to their deadly advantage (think the title character of Dr. No,  or Jaws from both The Spy Who Loved Me and Moonraker etc).  Even one of the posters for the movie is a parody of the old, controversial at the time, For Your Eyes Only advertising. So when I say the movie wears its influences on its sleeve, it is at least a well tailored sleeve and it does so in the most haute couture manner possible.

There’s some lovely stuff going on with the cinematography and editing too... some of which looks well thought out in terms of the way the shots are cut together long before certain specific set ups are even filmed. For example, there’s a nice rolling montage of four or five shots about a third of the way through the movie which has the camera moving from the bottom of the screen to the top and as it reaches the top of the scrolling screen (which is travelling downwards, obviously), a clear and well designed frame stop comes into view and peels into the next part of the scrolling montage. It’s a way of getting the basic messages over quickly and efficiently as to where different elements in the story are heading but, it also pays homage to the film’s comic book routes by presenting scrolling frames which could perhaps be read by some as an echo of comic book panels... so this was all rather well thought out. The camera had to pan through the shots at exactly the same speed to make the edit  work... although that may be an added movement in post production for all I know... but however it was achieved, it all works rather well.

I said the film was quite edgy for the teenage audience it’s going for. By that I don’t mean it’s inappropriate, far from it, but it is quite gutsy of the movie company to let it through in this form bearing in mind the way the BBFC have de-clawed anything and everything in recent memory and I applaud the company for it (there seems to be some disagreement as to whether there were cuts for the UK market or not). Where would the hero of a movie be offered, and make good on, the prospect of anal sex with a princess if he saves the world, for example... no, I’m not making this stuff up.

The film is also very violent, quite spectacularly so a lot of the time. I don’t want to spoil too much of this for people who, like me, are going to go in relatively blind, but there’s a scene utilising a curiously British adorned version of Tchaikovsky’s 1812 Overture which will really make people pay attention (and hopefully giggle uncontrollably) and there’s a lovely little breakdance sequence where Gazelle faces off against the film’s main protagonist Eggsy (played likeably by newcomer Taron Egerton) which will hopefully bring a smile to your face too. The violence in both of these sequences is mostly used to comic effect but there’s also a more serious tone to the violent shenanigans of some of the characters too...

The main premise of the way Valentine intends to threaten mankind, for example, is all tied into a plot device which, when activated, brings on a kill crazy spree of brutal violence not unlike the pseudo-zombies in the 28 Days/Weeks Later movies. There’s a brilliant sequence which is a full on 5 or more minutes of fight choreography involving Colin Firth which is both stylistically brutal but which also shows off one of my favourite things about the action sequences in this movie... they are all edited together so well that, even in a free flow melee involving 80 or more people, you aren’t going to get confused or lost in the choreography. Which is pretty impressive if you think about it, and one of the arts of modern action film-making that seems to have fallen by the way side a little with some directors.

The acting performances are all superb and the editing and pacing all flows right along to give the audience a path through the movie which never once gets boring. The sound design is also pretty amazing, with the sound of the gunshots in particular seeming to have a lot more presence in the mix, so that they sometimes surprise you with their speed and intensity on the soundtrack. Like I said... the film is quite edgy.

And last but by no means least, we have the score composed by Henry Jackma and Matthew Margeson, which really does have one foot in the modern world of action scoring and one foot in the sixties. At various times throughout the course of the movie, the same kind of slow build ostinato fugues that John Barry used to conjure up for such Bond films as You Only Live Twice (reviewed here) and Diamonds Are Forever (reviewed here) are referenced both structurally and in terms of their orchestration, to give the audience a big hit of nostalgic, sixties, super-spy magic at the appropriate places in the narrative. This is all good stuff and I’ll certainly be ordering the CD when it comes out later in the month (hopefully).

At the end of the day, Kingsman - The Secret Service is a big popcorn movie for teenagers and adults alike. It is unashamedly this but, since it also hits all the right notes in terms of tone and does so in a technically competent and brilliant manner throughout, I think even the most jaded popcorn warriors will be hard pushed not to get a thrill out of this one and, frankly, the slightly lengthy running time just whizzes along and will leave you wanting more. I know I’m hoping for a sequel at some point, if the creative people can bring the same kind of charm and intensity to the finished product that this one has. A really great little movie and a definite hard recommend from me. Enjoy.