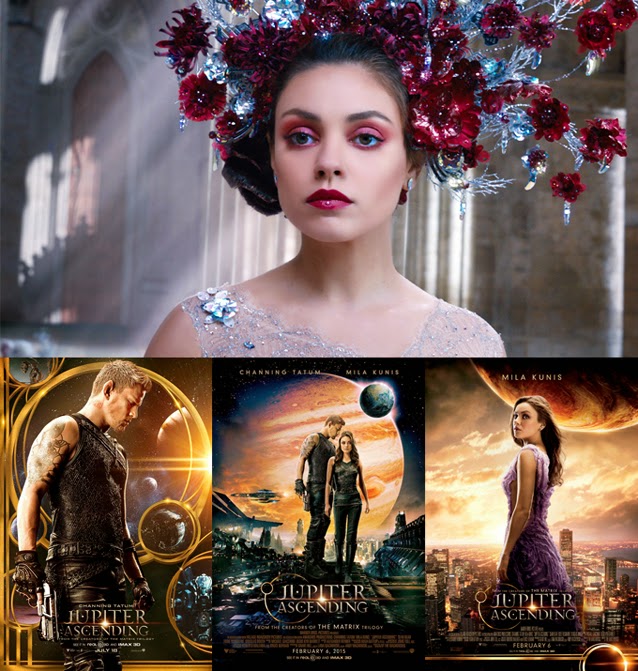 You know, I so wanted to title this review Jupiter, Arse Ending, because I’d already been primed by the film’s promotional trailer, to expect one of the worst sci-fi films ever made. Seriously, just like Kingsman, The Secret Service (a film I reviewed here), the trailer for Jupiter Ascending did absolutely nothing to make me want to go and see this movie. The trailer's a mess of clunky dialogue and hollow, non-contextual special effects clips that actually put me off wanting to go for this one. And if I’d missed seeing this one at the cinema, I might never had gotten around to it because a trailer this bad... blimey! And that would have been a shame, as it turns out.

So why did I luck out and go and see it then? Simple. I heard that Sony Music they were releasing a double CD album of the film’s score by one of my favourite contemporary composers, Michael Giacchino. Now, Giacchino’s involvement alone would not have gotten me into the cinema and past that awful trailer, to be honest. What actually got me there was the fact that a double CD album meant that Sony were invested in releasing two discs of a score... so they must have had some faith in it. A score must be pretty special to get the two disc treatment these days and, since I’d already been to see what can only be the worst film I’ll see this year, and a lot of other years besides, Mortdecai (which I review here), I figured there was surely no way that Jupiter Ascending could be anywhere near as bad as that movie had turned out to be.

And so I went to the cinema last night to see, and hear, Jupiter Ascending for myself... and I was both delighted and disappointed by it.

Delighted because it’s, frankly, a damned good escapist, pulp sci-fi movie which is rarely pulled off as entertainingly as this one is and disappointed because, as I said in my opening line, now I don’t get to use my cool Jupiter, Arse Ending title for the review. Damn!

So why does the film work so well?

A friend of mine, Jason Pyke, had told me that it was a bit like Dune crossed with Brazil and that’s a pretty good little summation, I think... one which I’ll look at in more detail in a minute. It’s pretty much a film which covers all the bases and is influenced by a lot of science fiction and space opera over the years. A lot of the influences are not hard to pinpoint and there’s really no reason why this mess of a movie should hold together as well as it does... but it somehow seems to pull it all together and transcend the possible disasters that most postmodern amalgams fall prey to... and has fun doing it along the way.

Some of the things that really shouldn’t work are the clunky dialogue that actors and actresses like Mila Kunis (as the perfectly pulpily named Jupiter Jones), Channing Tatum, Sean Bean and Eddie Redmayne are having to try to say whilst keeping a straight face. It’s seriously bad in some places but the performances, coupled with the way it’s edited, seem to make up for it in a way that the trailer, to be fair, couldn’t have possibly been able to hide. The always brilliant Eddie Redmayne (see my reviews of his films My Week With Marilyn and The Theory of Everything) is somewhat uncharacteristically over the top here... using a terrible ‘treacherous royalty’ kind of accent and a performance which should leave you laughing but... I honestly don’t know how he got away with it but it just about works here... strangely enough.

There are a few things, asides from the performances and awesome visual effects, that the film does have going for it. It really is not unlike the Dune books by Frank Herbert, although the ‘spice’ has been replaced, right up front, by a commodity which will have any sci-fi fan worth his or her salt quoting a certain famous Charlton Heston line from the movie Soylent Green. However, to offset the tone, the film seems to work with the same kind of methodology of a Roger Corman movie... but instead of a scene of gratuitous nudity inserted for every ten pages of script, you have an action sequence to offset any of the plot as it runs it’s course. So it’s very much... talk - action scene - talk - action scene - talk - action scene in the most transparent way but it works like the best examples of that kind of escapist product works, the same way an old Doc Savage novel or a good 1930s - 1950s theatrical serial might work. And it keeps you entertained.

Also, it’s noticeable that a lot of Joseph Campbell’s theories about ‘story and myth’, the ones that George Lucas was making such a fuss about a little while ago, are woven, almost by default, into the story and screenplay... so it works really well when you have ‘magical aids’ to the heroine’s “call to adventure” like antigravity boots and the control of bees thrown into the mix. It’s wild and hilarious at some levels but it moves so fast that you never get the time to be anything other than caught up in the story.

And, yes, you do have a sudden insert into the middle of the movie which is basically ten minutes of Franz Kafka as filtered by Terry Gilliam’s Brazil... which somehow fits right into things and is capped off with a lovely little cameo of a role played by Terry Gilliam himself. A nice little cherry on the cake for that scene and, like I said, this movie is not exactly quiet about its various influences.

Fans of British comics who are familiar with the famous, multi-part epic Judge Dredd story The Day The Law Died will also recognise a strangely winged variation of the terrifying Kleggs, although they are not actually called that here. Also, the arguably ‘real life’ aliens known world wide as The Greys are mixed into this intoxicating cocktail of a movie in a way which is both sinister and representative of their place and function in modern Urban Myth and UFO Folklore. In fact, after a bit of a clunky scene, it was these characters who really pulled me into the mythology of the movie and allowed me to "buy in" to what the Wachowski’s are trying to achieve here... which is, at the end of the day, a hugely entertaining pulp fest reminiscent, it’s true, of various 1950s sci-fi stories but with a lot of heart behind the spirit of the final product... and a lot of action too.

Now, while Jupiter Ascending is unlikely to be winning any awards, it does have a strong, central female protagonist and an underlying romantic story set to a background of upper echelon, royalty and politics... and a heck of a lot of punching, fighting, chasing and general mayhem exploding onto the screen at the drop of a hat. If you go and see this movie, love it or hate it, one thing you are not going to be is fed up with it.

Oh, and as for that Giacchino score I was so anxious to hear... fantastic. Operatic and action packed scoring which isn’t completely buried in the mix and will have you tapping your toes along with the galactic obliteration. It’s a great score for a great little, big budgeted B-movie. A B-movie which, impressively, transcends its short-comings, of which there are many, and polishes it up into a fast moving, entertaining thrill ride which is over way too quickly. Definitely a film that should find its audience, I think. And if you like pulp sci-fi adventure yarns, you should seek it out too.