Doctor Who - The Web Of Fear 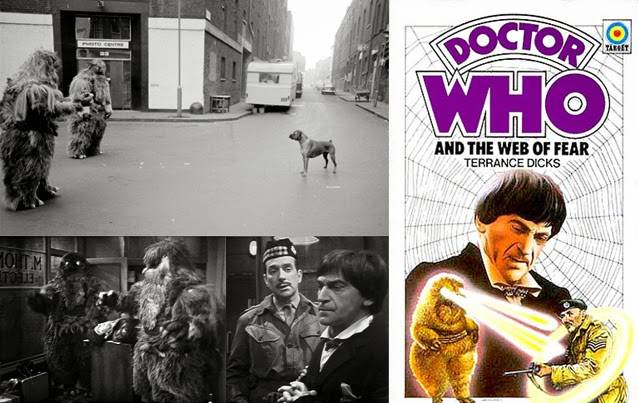 Where Snowman
Has Gone Before

I’ve wanted to see this serial for most of my life and certainly never expected to see the bulk of the episodes that are on this BBC DVD release from the end of 2013. You might remember the news story at the time? Five out of six of the episodes of The Web Of Fear and all of the complete serial to Enemy Of The World, two Patrick Troughton Doctor Who serials which had been, like many, purposely wiped out from the BBC archives in the early 1970s, were found and quite quickly released onto DVD. There are no extras on the discs (apart from a reconstruction using the original sound recording and surviving stills for the missing third episode on The Web Of Fear) but the DVDs still managed to hit the top of the DVD charts for weeks and there was a lot of excitement about the releases.

This is an important story for two reasons... the first being that this is the second appearance of the Great Intelligence and his robot servants, the Yeti. This is actually the sequel to the original Doctor Who adventure The Abominable Snowmen but we only have one surviving episode, to date, of that first Yeti story. The Great Intelligence was later to return a few times in the form of Richard E. Grant during the Matt Smith era of the show but the only other time the Yeti were seen after this was, of course, the anniversary story The Five Doctors, when Patrick Troughton’s second incarnation of The Doctor and Brigadier Alistair Lethbridge-Stewart briefly took one on although, if memory serves, not much more than an arm was seen on that occasion.

And talking of the Brigadier, although this is not actor Nicholas Courtney’s first appearance on the show (that was in a part in the William Hartnell story The Daleks’ Master Plan), it is the first appearance of him playing his most famous character, Alistair Lethbridge-Stewart... although this is before the character was the Brigadier of UNIT and was, at this time in his chronology, a Colonel in the army.  Unfortunately, and as luck would have it, the third episode of this serial, marking his first appearance, is the one missing episode which has been “reconstructed” using stills so, alas, you can hear his first episode but you can’t see it. He is in the next three episodes too, though, so at least we can get a proper look at Colonel Lethbridge-Stewart in his earliest story.

So The Web Of Fear starts off with Professor Travers, played by Jack Watling, and it must have been strange for audiences who remembered the character from the previous year to see him playing the part in “aged up” make-up at the start of this serial because, in the 1967 serial The Abominable Snowmen, he’d played the character as he was 40 years before this second adventure takes place. He is seen at the start arguing with his daughter and a private collector, who has the one surviving Yeti robot shell in his personal museum. However, Travers has been doing some experiments and the Yeti control sphere he is working on has disappeared. We see it break into the museum and activate the Yeti which, because of the impracticalities of the original costumes (if I’m remembering rightly), suddenly transforms before our eyes into the Mark 2 Yeti which, in all honesty, don’t look all that great compared to the original creatures but... hey, I’m really not complaining.

The Doctor and his companions, Jamie and Victoria, arrive some time after this in the underground system in London, which has been locked down and is one of the places where the army is holed up because the Yeti have taken over London. Once The Doctor and his companions arrive, after some fair amount of shilly shallying back and forth among the tube tunnels for a couple of episodes, they lend their assistance to the Army, Travers and Traver’s daughter Anne. However, while his on screen daughter is played here, very nicely, by Tina Packer, this serial is also noted as being the second time that Jack Watling has also played opposite his real life daughter on Doctor Who (the first time being the aforementioned serial The Abominable Snowmen). Victoria is, of course, played by his daughter Debbie Watling and, towards the end of the serial, she shares a fair few scenes with her father. This, of course, wasn’t the last time a parent and child actor would be playing opposite each other on Doctor Who... the Matt Smith era story The Crimson Horror (reviewed here) also featured Diana Rigg and her daughter... but it’s certainly interesting to see how the chemistry between father and daughter works here.

All in all, I had a lot more fun with this serial than with the one I’d watched a few weeks before (The Ice Warriors, reviewed here) as it’s very much a fun romp typical of serials which use a few locations and lots of running to and fro between them as new plans to conquer the alien menace are introduced and tried. The writing continues to be more interesting than a lot of modern era Doctor Who stories in that the B-characters are more fleshed out, even when they have only a very subsidiary role to the plot, and the actors playing those kinds of parts have more to do, with the writing allowing them to bring more of their personality out in the roles. Of course, this is partially because the story and characters have more room to develop in a multi part serial, rather than trying to cram everything into 45 minutes in one hit like they usually have to today, so I guess I’m comparing intergalactic apples to Gallifreyan oranges here... but either way you cut it, the minor characters also have room to leave their mark in these shows.

The Yeti are still a great creature, even if they’re not as pleasing to the eye as they were in the more cumbersome costumes of the previous serial, making nice growling noises and being quite lethal and dangerous, despite suffering from ‘they’re moving so slow they’ll eventually catch up with you through sheer will power of plot function’ syndrome for most of the time. The ending of the story is cool too, in that things don’t quite go as The Doctor had originally planned and, to cap it off, you have everyone running around in what look like genuine sections of the London Underground like Covent Garden, Holborn and various Circle Line locations. I’ve always kind of liked the idea of stories set on and around the London tube system but they’ve mostly managed to let me down. The studio sets on this one are so well done that apparently the BBC received complaints from London Transport at the time, saying they’d filmed in their tunnels without their permission... so the sets are that good.

One thing, however, really puzzles me and it’s something I am hoping one of you readers might know the answer too. As Troughton is running around in a station in the last episode, he passes a movie poster which says it’s starring Rod Steiger and Sydney Poitier and it’s definitely the same graphics from the advertising for In The Heat Of The Night from the previous year (although The Web Of Fear itself is set in the ‘future’, in the early 1970s... which makes me wonder about the continuity between this story and the UNIT stories later in the show... up to and including the Brigadier character’s last appearance as a cyberman in the Peter Capaldi story Death In Heaven - reviewed here). However, instead of being called In The Heat Of The Night, the film is called BlockBuster... which makes no sense to me because I can find no record of In The Heat Of The Night being retitled to that in any international territories and, definitely, not in the UK. Now it may have been that the BBC, who wouldn’t be seen to have any advertising on their channels at that point in time, had changed the title to avoid advertising the film. Even the cartoon show Top Cat was always announced on air and listed in the Radio Times as Boss Cat to avoid having the same name as a recognisable brand of cat food. However, if that’s the case, why use a clearly recognisable and famous movie poster and leave the actors’ names on it? And why change it to a term like blockbuster when, to my knowledge, that particular generic term for an extremely successful film hadn’t slipped into usage yet in the late 1960s, when this thing was written? I’d be interested if anyone has got the definitive answer to this unusual “guest appearance” and, if you do, please leave it in the comments section below.

Despite suffering a little from not having a proper third episode... which is a great shame but, you never know, it may turn up some day... The Web Of Fear is a really nice little Troughton serial and I’m delighted to be able to finally watch the thing at last. Fans of Doctor Who, and the Second Doctor in general, will love this one and, with so few of the Troughton stories surviving the whole “missing presumed wiped” scandal, it’s one of the few stories we have to remember this Doctor and these specific companions by. Definitely a nice addition to the Doctor Who library and I’m very much looking forward to picking up the preceeding serial, Enemy Of The World, sometime in the course of the next year.