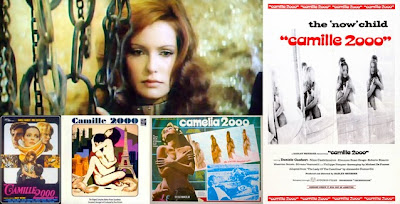 Camille 2000 is only the second film I’ve seen directed by Radley Metzger but, like The Lickerish Quartet, which I reviewed here, I was totally blown away by it and I’m absolutely appalled by the lack of response and interest in this film that both the IMDB and certain influential critical web sites have seen fit to let stand. I only knew Metzger before I saw The Lickerish Quartet, by reputation, as a man who made cheesy sexploitation and porn films but, frankly, this is the second time I’ve been both mesmerised and enthused by the way he handles his art and I think this director is worth a lot more of any cineaste’s time... whether that’s an unpopular statement to make or not.

Camille 2000 is Metzger’s, then, contemporary reworking of Alexandre Dumas’ La Dame Aux Camélias but, sad to say, I only know the original work through a reference in Woody Allen’s old stand up routines of the 1960s... so I can’t compare this movie in terms of adaptation although, in all fairness, I don’t think it’s trying to be anything other than slightly inspired by what I’ll grudgingly call the ‘source material’ here. The Allen routine, with the one throwaway line about the original, did tip me off to how the movie was going to end, though, it has to be said.

When I saw The Lickerish Quartet, I’m sure I probably made reference in some way to the metatextual nature of the narrative and the way in which Metzger pulls the objective rug out from the viewer half way through and makes you think about... and question... everything you are seeing. There’s not a heck of a lot of that going on in this movie but he does include a bookending device which plunges you into a similar dilemma of how you might, or might not, read the images differently in context of the whole story and this bookend starts with the title of the movie shouted out by a crew member, possibly Metzger himself, as it is seen in the context of a clapperboard announcing the unfolding film as a specific take. So that’s all quite interesting and I’m wondering if this kind of implied versus perceived reality is a particular fetish or obsession for Metzger and whether it crops up as a signature gesture in many of his other works.

What I do know for sure is that he takes a simplistic plot of a man falling for a woman... a lady who is used to a less morally inclined lifestyle... and explores their relationship, break up and the true nature of their wounded love for each other while embellishing it with a sense of beauty and 'aesthetic wow' which makes the whole thing worth watching. Margueritte, played by the gorgeous Danièle Gaubert, the Carmille character in the film (it’s her nickname because of the flowers she always has around and the ties to the Dumas character it conjures up in people’s minds... oh wait, there’s that metatextuality again) sacrifices her own happiness and breaks up with her naive new lover Armand, played by Nino Castelnuov. Armand is one of many lovers she has and she ditches him because she believes the words of his father that they can never be happy together due to certain aspects of their basic nature. And therein lays the tragedy, of course.

In anyone else’s hands this story might seem dull and pointless but Metzger’s artistry is pushed to the fore and he shows us various encounters between the lovers and their friends (many sexual or filled with nudity) and every scene seemed to me to be a toolbox of new visual treasures... both in style and also, of course, in content. One lady wears a beautiful string vest style dress which hugs her in all the right, revealing  places and it would be true to say that there’s a lot of fascination in this particular movie with see-through costumes... but it’s not just in the costuming that this interest manifests itself.

Yes, there’s a whole lot of transparent or semi transparent costumes in the movie but the director also shows an interest in shooting through or against similar textures made from glass or mirrors and he uses this often to make multiple planes or sections in a screen to position his actresses and actors in, giving us beautiful compositions worthy of some of the most celebrated cinematic artists of our time. This is especially true of the sex scenes and there aren’t many, maybe one or possibly not even that, which aren’t shot through some kind of third party texture or substance.

For instance the first sex scene of the movie, which includes off-screen fellatio, is rendered as various shots through mirrors. Later on, the ‘love making’ utilises the reflections in a whole bank of mirrored panels used to show multiple views of the coupling. Starting off with five panels we, after a while, cut to a close up shot of two of the panels and then we pan along the small bank of mirrors before cutting back to the master shot and repeating the same movement in a larger view of what turns out to be many, multiple mirrors which make up one of the walls of Margeurite’s bed chamber.

In fact, all the sex scenes are equally inventively and tastefully shot, with one specific part of one of the sex scenes being pretty much the only one not executed through some kind of artifically occurring, reflecting or refracting viewpoint. The specific shot I’m thinking of is quite amazing and I want to try to describe it for you here...

Marguerite is lying naked on her back on a bed with only her head and shoulders shown, filling half of the frame coming in from the left of the shot, while Armand performs, presumably, an act of cunnilingus on her. So her head and shoulders are forming a horizontal profile within half of the landscape ratio of the shot. There is a bowl of white flowers, presumably Carmelias, filling up the foreground, in front of her, in the right hand side of the shot. As Margeurite’s pleasure mounts, her breathing becomes heavier on the soundtrack and this is when Metzger (and I believe he went to  lot of trouble to get this set up to work) starts changing the rack focussing of the shot to bring the flowers into deep focus and blur Marguerite’s head and upper body. As she sighs and breathes in and out on her approach to orgasm, Metzger starts refocussing the shot , alternating between her and the flowers, as she breathes in or out... giving us a pulsing and very visual representation of Marguerite’s head space by illustrating it with the rhythm of the constantly shifting differential focussing.

So that’s orgasm through rack focussing... and it’s pretty amazing to watch. Worth the price of admission alone, I would say.

The film is peppered with cool and witty little touches too like, for example, a lady exhaling from the joint she’s been smoking into a balloon, thus inflating it, before passing it on to the next person, who deflates the ballon in his mouth... which is kind of a nice visual way to show this whole kind of drug sharing routine. Or there’s the moment when Armand realises that Camille has not turned up for their date because she is sleeping with another man, so the next day he sends her a personal message of a woman turning up at her door. The messenger turns her back on Marguerite and steps out of her clothes, revealing a written note on her back from Armand, scrawled in lipstick or some other media, which says “You are a whore. I was an idiot.” The implication of how Armand got the message on the gal is plain but also one which Marguerite finds amusing and not in any way troubling... perhaps even a little endearing and this, perhaps, highlights the difference between the inner worlds the two inhabit.

Another interesting scene comes up towards the end of the film, where Armand and the current 'successor' to Marguerite’s charms play a James Bondesque duel of Chemin De Fer, both trading insults about the other’s character and, perhaps unfairly, about Marguerite’s value as a human being too. This was a little hard to watch because, frankly, the tragic character of Marguerite was very much the hero of the story, for me.

There are a load of, pretty much soft core in this case, sex scenes scattered throughout the movie and I have to say they were less than erotic but much more interesting to watch on a visual level... which is one of the key things I personally respond to in terms of cinematic aesthetics. It wasn't the sex scenes that kept me hard, it was the way in which the director used the camera which kept my enthusiasm at much more than half mast. It’s also quite striking that a scene towards the end of the movie, set in a hospital, has the two main characters separated by a plastic, transparent, life support tent... which is kind of an interesting sense of synchronisation with the tone of the characters when you consider that the majority of the sex scenes in the movie between these two are shot via either a reflective or transparent surface... or a groan inducing combination of the two.

Piero Piccioni’s score is, unsurprisingly for a composer of his character, utterly fantastic too. Unfortunately, the soundtrack was issued ages ago by the now, pretty much defunct, Right Tempo label and so it’s quite rare and expensive in a physical edition these days (and if I want to get into the spirit of Camille 2000, then I definitely want to get physical with it). As I was watching, I realised that I had probably already got at least half the musical cues on this because it’s one of those scores which always tends to get represented, by some track or another, on many of the Italian exploitation score compilations I have in the racks... but I’d still like to get my hands on the full version at some point (there’s a download available but... who has room on their computer for downloads?).

And that’s pretty much it, in terms of Camille 2000. I was completely bowled over by the technical artistry in this film and I really need to see more of Radley Metzger’s work now. Unfortunately, a lot of his stuff is quite badly censored in the UK so I’m going to have to do my research and look farther afield than what can be found on these Victorian shores (actually, with the state of censorship in this country as it is, this statement is quite insulting to Victorian values... we’re far worse off in the United Kingdom now than the Victorians ever were). As far as this movie goes, though, the Arrow Blu Ray restoration and remaster is a thing of beauty and it’s got a few nice extras on it too. Definitely something I’d recommend to most lovers of cinema, I think... regardless of the reputation it seems to have garnered over the years. Grab this one while you can.
Posted by NUTS4R2 at 19:51