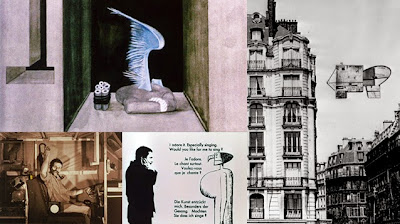 I’ve not seen a heck of a lot of films, over the years, by the famous and, quite possibly notorious, director Walerian Borowczyk because a lot of the material he turns his attention to is kind of edgy and it’s usually handled in the kind of matter-of-fact but playful way that drives British film censors wild and reaching for their loathsome, art defacing scissors. That being said, he was always on my mind when I was going through College in the late 1980s/early 1990s because his films often seemed to be playing at the equally famous Scala cinema... and I usually had one of their incredible “picture timetable” posters pinned above the desk while I worked, more often than not featuring shots of scantily clad ladies as illustrations for films by this director (and usually a few Russ Meyer ladies would be on there somewhere too).

I remember, when I was studying my Graphic Design Degree at the London College Of Printing, my old screen printing teacher, with whom I used to occasionally play badminton, telling me that she was off to a screening of Borowczyk shorts at the Scala one evening. I’m guessing the contents of this dual DVD/Blu Ray edition, which has been put out by Arrow films and which I got cheap... err... at a value for money price at Fopp is, probably, fairly near to what she saw that evening.

All in all, the style of a lot of the films on this disc are something that I might expect to have come from the mind of modern surrealist animator Jan Svankmajer and both he and Borowczyk seem to share a passion for exploring what I am about to call... a cinema of textures. Investigating, through animation in this case, the way both animate and inanimate objects can be exploited as a celebration of flat surfaces and their juxtaposition with contrasting shades, colours and textures. And also, another similarity to Svankmajer’s work, things will often move around by themselves with no visible hand at work to explain the motivation and spirit of various paraphernalia.

The films show off a wealth of both visual and aural ideas as you go through the body of work, perhaps more obvious and less tempered than when they are restricted by the credibility expected from an audience when using live actors... especially made, as most of Borowczyk’s films were, in an era bereft of the CGI trickery modern audiences take for granted. There are around eleven shorts on here and one feature length animation, The Theatre Of Mr And Mrs Kabal, which is a sequel of sorts to an earlier short found on this disc, The Concert.

Out of these, there are certain films which struck a chord with me more than others and I found myself admiring the minutia of an inner Borowczyk world unfiltered by the constraints which might leave his live action work bereft of the majority of such overt observations. I liked the way, for instance, his short film Les Astronautes is mostly animated by rapidly cutting stills together... well, yeah, that’s all film, actually, but what I mean to say is... doing it so that the eye can easily perceive the cuts. Like a lot of his shorts, the film pulls us straight into a world of abstraction but in this case, it does have at least a basic, easier to conceive, linear framework to hang things on to... the journey of an astronaut in his spaceship. It’s a cornucopia of absurdities which possibly wears a little thin by the time it’s played out but there are nice little touches like a periscope the main protagonist uses when he’s flying around the earth which shows his eyes visible in the top part as he watches a lady in her underwear from inside his perpetually morphing spacecraft. There’s another nice little touch when he is flying along upside down in space and his hat drops to the ceiling of his craft. Every time he reaches up/down and puts it on so he can be wearing it whilst driving, it just drops to the bottom/top of the ship again... so instead he sits on some books to make himself tall enough to wear it. It is somewhat whimsical and I might be tempted to say that the whole thing was influenced by The Beatles movie Yellow Submarine... except that it dates from 1959, long before that particular animated feature and long before space travel was a reality too, of course. So maybe the creators of Yellow Submarine saw this at some point.... it’s quite possible I would imagine.

His short work Renaissance features, more overtly, another device which I’ve also often seen Jan Svankmajer use, that of the self constructing or deconstructing ‘entity’... be that entity an animate or inanimate object or character. This one starts off, for instance, with an owl constructing itself from its basic components, the feathers growing thicker as time passes. After he’s done with the owl, Borowczyk focuses on various other objects in a room constructing themselves... trumpet, photograph, wicker basket, scary children’s doll etc. A bunch of grapes appear to the sound of a typewriter clunking away with added carriage return (not sure if any of my younger readers will be familiar with the expression ‘carriage return’ actually... which is a sobering thought about the rapidity of technological change in the scary world we’re living in these days, I think). The short ends with a hand grenade being constructed and then, quite rapidly, deconstructing the whole room again when it blows up.

Another of the many shorts on here which I took a shine to was Joachim’s Dictionary, which consists of a line drawing of a man with slightly different things happening to him as a new dictionary definition is applied to each mini vignette. There was a nice little two part joke which highlighted, in different definitions, the difference between Man and Boy by showing how each would eat a cherry and then just spit out the stone... that is to say, man and boy: no difference between the two. So that was cool although, the majority of the shorts aside from these three and another interesting one called Scherzo Infernale, detailing briefly the story of an angel who wants to be a prostitute, really didn’t do much for me. I had, very much, a feeling of ‘seen it all before’.

The feature length animation The Theatre of Mr and Mrs. Kabal, a sequel to the less interesting short The Concert (aka Le concert de M. et Mme. Kabal) held my interest a little better. The film starts off with the animator, possibly Borowczyk, entering the frames and conversing with Mrs. Kabal, who communicates with him in an electronic gibberish on the soundtrack which is subtitled in three different languages as she speaks. This one explores another surrealist environment and also hangs a somewhat linear, if hard to fathom, thread through the whole thing. Mrs. Kabal seems, I think, to have an aversion to butterflies but, when she ‘consumes’ too many, her husband has to find a way to help. Inspired by ‘a film within a film’ about the human body at his local cinema, he blows his wife up in size and goes to work on her, entering her insides in a manner similar to the protagonists in the movie Fantastic Voyage, but with the size difference achieved through reverse means. Turns out the butterflies have caused quite a lot of trouble in Mrs. Kabal’s body and it was interesting to see what I can only presume was the ghost of Mrs. Kabul, herself, wandering around inside her for a bit, too.

A well animated feature but, as I said, one out of many which held my attention much less than I was expecting. That being said, it is a very creative set of shorts in many ways and, if youre not too long in the tooth and were not inundated by completely incomprehensible Polish and Czechoslovakian surrealist cartoons playing as fillers between TV programmes in the early 1970s, then you may find that you’ve not seen stuff like this before. At the small amount of money I payed for this dual DVD/Blu Ray edition at Fopp, it’s definitely something I would advise any cinephiles to avail themselves of in the near future. As for me, I think I prefer Borowczyk’s live action features, what little I’ve seen of them, to his animated shorts but, even so, I can appreciate the hand of a genuine artist when I see one. Certainly, I’m glad I’ve seen these now and it’s not inconceivable that I’ll give them another watch in years to come. Put this one on your list if you are a fan of shorter works of cinematic art, is my advice.