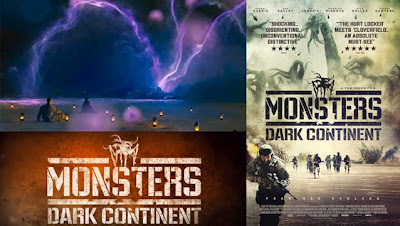 Monsters: Dark Continent is a sequel to the Gareth Edwards movie, Monsters, from a couple of years ago and which I reviewed here and which, like this one, had big, Cthulhu-like monsters as part of its main narrative thrust. It’s not to be confused with the upcoming movie Dark Continents which, I understand, is based on five stories by Cthulhu creator H. P Lovecraft and which, I suspect, may also have Cthulhu-like Monsters in it. Hmmm... so I guess the point I’m making here is... why release this movie with that title if there’s a much more famous, because of the directors involved, movie coming out with more or less the same title a year or so down the road? That makes no sense.

Now, this film can’t have had too much pre-publicity, I’m guessing, because the first I’d heard that they’d actually gone ahead and made a sequel was when I saw this included in the listings for my local cinema this week... and even then I had to look it up to find out that it was a sequel to Monsters (the original director is listed as a producer but I’ve really got no idea how much involvement he had on this one). To make things worse, I went to see this on the first Saturday, early evening, screening of its opening in my local multiplex cinema, a night and time when it should have been packed out, and found that there were only two or three other audience members in there watching it along with me. So, sad to say, I predict that the box office on this film isn’t exactly going to be great... especially since it was released a few weeks earlier in the USA and, as a dedicated Twitter user and follower of people interested in film, I still hadn’t heard of it until it was in the listings for my local cinema a couple of days before I went and saw it. That doesn’t bode well for it.

Which is unfortunate in some ways because, although I wasn’t personally happy with it for reasons I will elaborate, it turned out to be a highly competently made movie with a certain edge to it and, whether I personally liked it or not, it certainly holds the attention of the viewer and you will probably be as gripped by some of the sequences as I was.

The film follows on from the first film only by the inclusion of the titular characters. It’s ten years on and the world is fighting a losing war against the Monsters who have left “the zone”. This film follows a bunch of new recruits in the army who join up and go to the Middle-East to fight the Monsters, which are not evil and are just following their alien nature. However, because the US army have ben bombing hell out of the titular creatures in various areas of that region, they also have to deal with a population of hostile insurgents who would much rather the army were driven from their land than the monsters. When the new recruits are sent on a rescue mission to find some of their unit who didn’t come back from an operation, they are forced to fight their way through hostiles in order to try and locate them and tensions and frustrations soar.

Now, I had three main problems with it and I’ll get those out of the way before I get to the positive stuff.

My first issue is that the film is much more a “horrors of war” kind of story with the monsters acting only as a catalyst and background decoration to the conflict of the stupidity/violence men do to each other... which is kind of an interesting tack but, ultimately, it felt like the film was way too busy pushing the writer’s own political agenda with not enough of the monster focussed mayhem I would have liked to have seen. Sure, there’s a heck of a lot more of the monsters in this movie than their brief appearances in the first but, still, they really were only there as a plot device more than anything else... at least that’s how I felt.

Secondly, none of the main protagonists had my sympathies as people at all... they were all portrayed as, pretty much, young thugs who’d joined the army to have a better life than dealing drugs in their ghetto and the first quarter of an hour where, I believe, the director was trying to get me to identify with these characters, was absolutely doing the opposite of what was required. I didn’t like these people who used harsh language and demonstrated really crude, almost violent, male bonding rituals. They alienated me right from the start. But the flip side of that is, of course, whether the language and attitude of these people are accurate to those of modern, young soldiers or not... the actors were all really great at convincing me these were real people. I might have hated them all but, at least, I could suspend my disbelief to the point where I couldn’t sympathise with them. So... great acting job here by a lot of the people who are in this movie.

The third problem in this is the fact that it’s a conflict movie which does tend to fall back on the crutch of constant, war movie clichés throughout. For example, in the opening montage of the buddies who have “joined up”, the writers and director (not to mention the cast) are working hard to get across the importance of one of these friends returning home from duty by showing him helping his girlfriend give birth and all his friends promising they’ve got his back while they’re on his tour of duty. For anyone who watches these kinds of films, of course, that’s an instant telegraph that something bad is going to happen to this character and, I have to say, I was quite disappointed when exactly that happens and this character is the first of the group to meet his maker in an extended scene while his friends are under fire and trying to save his life. It doesn’t get much more predictable than this.

Other clichés include the group leader and authority figure whose responsibility it is to keep his soldiers safe, losing nearly all of them and then suddenly going a bit ‘Captain Ahab’ about things and getting obsessed by his mission at the cost of his humanity and sanity. Well acted but... nah, seen it all before. And the one about the lone soldier who grows to a state of enlightenment and understanding about things, to a certain extent, because of what he’s been subjected to in his own personal battle and his ability to see the good in his fellow man? There’s that one in there too. But, of course, clichés like these work and I suspect people who haven’t seen a lot of war movies, or that kind of thing, might be sucked into the narrative a whole lot better than I was... so I cant really condemn it for this. It might be old school but it does its job and, it has to be said, it does its job quite effectively.

Everything else about this movie is great. The special effects are cool, the tension and suspense in the combat scenes is almost unbearably intense in certain places and, while not as harrowing as some of the great war films, it can still be a gruelling watch in some moments and the combination of constantly moving, hand held camera combined with some extremely competent editing really pays off for it. Once you can get over the ridiculously low values of the characters, it’s a joy to see a well oiled machine of a movie like this one at the local cinema. It also has an interesting correlation in a “dog fighting sequence”, something I really don’t approve of or condone (we all love dogs, right?) but switched out to be a dog fighting an infant alien, and using that to show us both the changes and commonality in the attitudes of the cultural backdrop of the world depicted in the movie. Nasty to watch but, nevertheless, good stuff to get certain points across in short hand.

And the surprising thing for a movie which is using a lot of “camera reaction” style photography is the fact that it has a very striking and entertaining score by composer Neil Davidge which, alas, is only available as a stupid download. When will record companies get it in their heads that we want these things on CDs please? A download is next to useless to me, frankly. They might as well just put it on vinyl... which is equally useless to me. Such a shame because I actually wanted to buy this score since it is so strong in the context of the movie and sounds like it would be a really great thing to listen to away from the venue it was created for. Such a shame.

All in all, the film is quite gritty and if you are able to sympathise with the main characters, then you should have a really good time at the cinema with it. Even though I can’t relate to characters who seem happy to behave like football hooligans rather than somebody I would personally like to hang out with, it can’t be denied that this is well put together, well acted and is quite compelling... even though it’s also quite predictable and there are not too many surprises in store, to be sure. Its a shame that a movie like this has been released into cinemas at this time of year when it’s going toe to toe with stuff like the new Avengers movie (my review of that one here) which will inevitably suck all the audience away from films like this... it perhaps deserves a better fate than I suspect it might have in store for it. Saying that, though, it’s a good bet it will do reasonably well on DVD and Blu Ray rentals through word of mouth with a young audience, I reckon... so good luck to it and if gritty, gruelling action movies are your thing... you might want to give Monsters: Dark Continent a look.