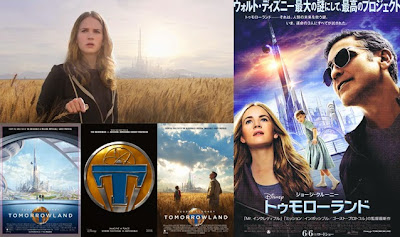 Hack To The Future

Warning: Very slight spoiler on the content
of one action scene in here towards the end.

Tomorrowland is a new movie by Brad Bird, director of The Incredibles (which I loved) and Mission Impossible: Ghost Protocol (reviewed by me here). It’s based around, or at least inspired by, concepts and ideas from the long running Disneyland theme park attraction Tomorrowland. However...

First of all, I’ve never had the opportunity to go to Disneyland so I really can’t say how much of a good... um... adaptation (?) it is of the original attraction but, I suspect the “inspired by” I just tagged it with is probably closer to the truth than anything else you’d want to say because, it turns out, the place has gone through a lot of reinventions and reboots in its long history, since it first opened its doors in 1955.

Secondly... I wasn’t that sure of what to expect from a movie based on a theme park attraction. The only ones I can think of, off the top of my head, are the Disney Pirates Of The Caribbean movies and... well I figured that at least the first one was okay. Can’t say a lot for the three sequels but, using that twisted logic, I decided to give this movie a go because the trailer was kinda intriguing and with that kind of track record from the studio... well... as long as I steered clear of Tomorrowland 2: Dead Man’s Jetpack... I figured I should be fine.

Now, I was unaware, when I went into this movie, about the decidedly mixed reception this film had been getting with people but I’m happy to say I was pleasantly surprised by this one. The only thing I really knew about it going in was what I said in my first paragraph and what I’d seen on the trailer which has been playing at my local cinema for the last few weeks. But the film surprised me by being, a) quite good and b) not what I was expecting after seeing said preview.

Now I’m sure a fair amount of my readers will have seen the trailer in question, which includes footage of a girl touching a randomly found pin badge and being transported to a future world of wonder whenever she touches it, while simultaneously still existing in her own time and place... although she is blind to our own experienced reality while she’s touching the pin. Well, all I can say without giving away too much about the film, which I’m really not wanting to do here, is that the version of the future world she sees and as the audience perceives it is not the whole story and is a little misleading in its entrance into the main premise of the film. And so I have to congratulate the writers and directors in taking a page from their own screenplay when it comes to the nature of the trailer in regards to the actual end product but... again... I don’t want to elaborate that point too much for fear of spoiling some of the reveals in this to you.

What I will say is that the main protagonist who you see in the trailer, asides from a nice bookend, framing element coming in at various points in the movie, doesn’t really arrive in the film as a properly established character until at least 20 mins into the movie but... that doesn’t matter and it’s a nice surprise because the film does jump in time a little by starting out in 1964 and then shooting off to the present day. Of course, not all of it is set in the present day, due to the nature of the story. Regardless of this, though, it starts off running and continues with a helter skelter pacing that really doesn’t let you stop and breathe much before the next exciting spectacle is upon you... and this film is all about cinematic spectacle, that’s for sure.

Now, it’s a great film but it does have its issues... the excessively hasty pacing being one of them. I would have preferred a little more stillness in there, I think, but Brad Bird is especially well known for
his animated masterpieces and that kind of art form does tend to move things along faster. Also, I suspect this is Bird’s natural preference for movie making too so that’s fair enough. It’s a personal issue I have with the film and I think that might be more my problem than anybody else’s.

Another thing I found kinda hard to handle, and I suspect this is another aspect of Bird’s personality, which is probably why he melds so well with Disney, is that the film is extremely hopeful, naively so perhaps, and is all about believing people can make a positive difference to the world... which is great. However, I did find it a little bit preachy and way too overkill in a lot of places. To explain...

When I was a young ‘un, growing up in the 1970s, my mum and dad used to take me, pretty much every year, to see the pantomime version of Peter Pan on stage. More often than not it would have Ron Moody playing Captain Hook and usually, for some strange reason, a grown woman playing Peter Pan (which possibly confused a load of kids but who am I to judge?). I think I probably loved it but I remember one part of the show where audience participation was a must. Peter Pan’s trusted ally, the fairy Tinkerbell, would be half dead and on the ropes... her little light fading and about to be extinguished forever. That is, unless the audience, with the power of their combined voices, could yell at the stage that “We believe in faeries” really loudly. Then, of course, after much frenzied repeat yelling and much milking of the audience, Tinkerbell’s little light would return to full brightness and we could all carry on with the show. I’m pretty sure that this probably carried over into the classic Disney cartoon of this J. M Barrie property too... although it’s been so many decades since I’ve seen it that I can’t be absolutely sure if it did. The point is, the film Tomorrowland suffers, if you want to see it that way, with a manifestation of exactly the same thing. It’s all about people believing enough in the future so that their will power can change and fix it... and so this whole “Tinkerbell solution” is something the director here has in common with that and... well, even as a kid, I used to hate that bit of Peter Pan.

Other than this stuff, though, the movie is a really fun ride... if you’ll pardon the analogy. There’s conflict and chase scenes aplenty with a much more ruthless and deadly intent behind the group of henchmen sent to kill our three heroes than you may guess from the trailer. Bird is not afraid to show both people and “animatronics” dying in the movie, if it helps provide credibility to his fairytales... something of which I wholeheartedly approve when it comes to getting certain points across and maintaining a modus operandi which won’t upset the suspension of audience disbelief.

This film is, by nature, extremely CGI heavy but, even with that constant distraction, the three main protagonists played by George Clooney, Britt Robertson and Raffey Cassidy are all really excellent and Hugh Laurie as their main antagonist, of a sort, is a good balance to address the kinds of cynical audience issues (such as some of the ones I have) and then hold them up as a villanous response for the three heroes to punch against. It all works extremely well.

The film has some nicely designed frames, some good editing which rarely gets confusing during the intense action sequences and a brilliant score by one of the director's chief collaborators, Michael Giacchino, sounding a lot here like he’s channeling Philip Glass in a couple of sequences (and I really hope they decide to put those cues on the upcoming soundtrack album.. fingers crossed). Michael Giacchino rarely turns in a dull score and his work here is par for the course... that is to say, appropriate and wonderful.

The film includes a nice little nod to Alexandre Gustave Eiffel, Thomas Edison, Nikola Tesla and Jules Verne but the best scene for me is when Britt Robertson’s character Casey is trying to track down information on the pin and she goes to a science fiction memorabilia store. Here you will see a whole range of cool stuff as set dressing... the store is amazing and I was all over spotting the many references which includes models of Robby The Robot, Robot B-9 from Lost In Space, Gort from The Day The Earth Stood Still, a lifesize Han Solo in carbonite and a load of other cool stuff that will make collectors and fans alike wondering the prices of such things. A major action scene takes place in this store and, at one point during a chase, there is even a copy of the old Planet Of The Apes board game which I had as a kid and I recently mentioned in my review of Planet Of The Apes here. The only thing which was bugging me was... did they actually destroy any of these collectibles. Mr. Bird, for the record, a “no nerdy science fiction items of memorabilia were harmed during the making of this motion picture” during the end credits would have taken a weight off my mind.

Seriously though people, barring the caveats I mention elsewhere in this review, Tomorrowland is definitely worth some of your time. It’s a slick, action packed folly where all the main protagonists have their eyes on a prize of a hopeful  and positive future for the human race. It’s kinda like a mid-1980s sci-fi blockbuster but with more budget to bring some of the crazier concepts to life properly and with some really great actors in front of a crew and director who clearly know what they’re doing. Not a great movie but a really charming, good one which is definitely worth at least one watch... and I’m sure a whole bunch of you are going to dig it a lot more than I did so... you know... put it on your list and check it out sometime. And watch out for low flying jetpacks.