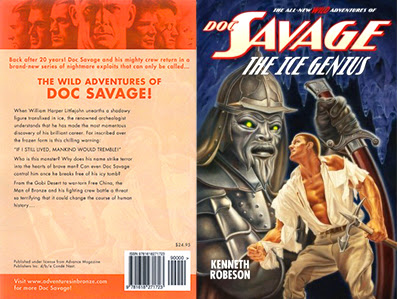 The Ice Is Right

Will Murray certainly has become the Kenneth Robeson of the 21st Century, tapping into the writing style of Lester Dent, the original Robeson, pretty well and, although the recent rush of adventures aren’t all perfect, certainly more than filling his shoes when it comes to continuing the yarns of Doc Savage - The Man Of Bronze just lately. Having said that, of all the recent written Doc Savage novels of the last few years, this one is definitely not the humour filled romp you might come to expect from these current adventures. The stakes are high in this one and, as you read the novel, you will feel a sense of urgency and doom which is sometimes missing from some of the other exploits of Savage and his Amazing Five.

The story starts this time with Doc’s aid William Harper Littlejohn (aka Johnny), the bony archeologist with a penchant for using long words who, while warding off an attack to his current dig by a mongol horde, accidentally unearths the tomb of Tamerlaine, an evil conqueror who makes Ghengis Khan look like polite company by comparison. The aforementioned figure is frozen in a cave of ice with an inscription reading “If I still lived, mankind would tremble”. Of course, when the Mongol hordes get there it’s up to Doc and his friends to try and stop the ice from thawing because... yeah you know what’s going to happen next right?

No sooner does the ice thaw than it turns out that the cold temperature has somehow kept Tamerlaine in a state of suspended animation for the last 500 years and he is ready to lead his new army in the conquest of China. This is obviously good science right here, I reckon. After all... it must be otherwise they’d never put it into books right? Doc Savage is all about pushing the science and in hindsight this may be a little tough to take right now but... if you actually had been reading this in the 1940s, it may well have seemed more plausible. I’m okay with it.

For a lot of the time, Tamerlaine and his gang prove almost a match for Doc and his crew. Matters are not improved when a former enemy of Doc, thought half cured in his Institute for rehabilitating criminal minds, stows away on their plane and joins them in their adventures, quickly remembering just who he is and causing a whole mess of trouble of his own.

The story is gripping. It’s not particularly epic in scope in terms of travelling the length and breadth of the globe like many of Doc’s adventures are but it certainly makes up for it in terms of action, fast paced thrills, narrow escapes and a number of grim reminders of the bloodlust that villains like Tamerlaine and his crew were capable of. The book is not particularly well suited for children, it has to be said, with various tortures described and, for a Doc Savage novel, an almost uncharacteristic amount of limbs and heads lopped off in the process of the adventure.

Uncharacteristic, yes... but the novel and writing style still contains the spiritual essence of the famous adventurer’s exploits of days gone by and there have been some grim goings on in Doc Savage pulps over the decades. Especially in the early tales when the formula wasn’t quite etched in stone yet (or perhaps that should be etched in bronze). Some were even grimmer than this volume, truth be told, so it’s not really a problem for me when it comes to the tone of the story Murray has chosen to tell.

The historical backdrop of this particular adventure is pretty interesting too, with the Japanese destruction at Pearl Harbour happening around about half way through the book. This leaves Doc and his crew defeated and knee deep in a bloody exploit, having to try and find a way to seeing the current adventure through to a more palatable ending, even though they have been ordered home by the American Government to join in with the war effort. A dilemma for them because, if Tamerlaine is left unchecked, it’s pretty clear the world may well tremble in his wake after the trouble he gives Doc.

Mostly it’s a truly great Doc Savage adventure but there were a couple of things I took issue with in this one. For instance, Doc’s trick disguises really aren’t likely to fool the reading public anymore, I reckon. The insistence of trying it on twice by having the reader listening to the wrong conclusions jumped to by trusted characters is in no way fooling anyone, anymore. Also, the fact that Johnny actually disobeys Doc’s instructions a number of times, intent on setting the events that he unwittingly unleashed right at any cost, did seem a little out of character for him. I can understand Monk or even Renny engaging in such shenanigans but not Johnny. Of course, the good side to this is that the tension is ratcheted up even further than usual and I thought, for a minute that Will Murray was going to use the story to explain something which made some of the regular characters very scarce towards the end run of the original series of tales. I’m kinda relieved he didn’t do what I think he was going to do but, now I’m thinking it wouldn’t be a bad idea for ‘the modern Kenneth Robeson’ to address some of these issues at some point. If somebody is going to do it with a certain amount of style and plausibility then Murray is definitely the person to sort that out.

One thing which really did irk me, though, was the contradictory choice of words in a certain passage in the book. Tamerlaine and his blood thirsty warriors are trying to stop a train and, since they lack the tools to properly rip up the rails, we are told that they find rocks and boulders to put on the track. However, around about a page later, when the train arrives, it pushes its way through the heaped up debris because, we are told, these “rocks were no boulders”. Say what? I’m sorry but we were just told that the Mongols were, in fact, specifically including boulders in their train stopping tools of choice. That statement totally threw me off track and popped me out of the story in a hurry, I can tell you. I found that slip up a bit problematic to say the least.

This really isn’t anything more than nitpicking in the face of what turns out to be a slightly different but ultimately compelling Doc Savage tale, however. Fans of the bronzed super science detective will love this tale of bloodthirsty bandits falling en masse to the bullfiddle roar of our heroes emptying anaesthetic ‘mercy bullets’ from their rapid firers in the middle of battle and some of them will surely appreciate that relying on various tricks of his scientific arsenal like this aren’t always going to be enough to get the results Doc desires. It’s a very hard slog, this one, for Doc and the gang and by the end of what I can only call a bizarrely bloodthirsty slaughter of a novel, things end up pretty grim for at least one of the characters and things don’t necessarily go quite the way that The Man Of Bronze would have best liked.

Pat Savage fans will be disappointed to know that The Woman Of Bronze only turns up in the final chapter of the novel but, when I tell you that final chapter is called Aftermath, I guess you can probably tell that this one is well worth a read and that you will be rushing towards the end to find out what happens next. Not the best of the recent Doc Savage revival novels but certainly a heck of a memorable one, at the very least. Once again, Doc Savage - The Ice Genius comes in as highly recommended by me. If Savage fans don’t like this one, I’ll be superamalgamated!
Posted by NUTS4R2 at 19:49