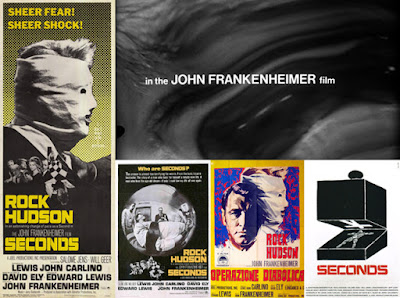 This is a film I’ve been wanting to see for years now and I kept meaning to pick up the US Criterion Edition for a while. However, there are a couple of DVD/Blu Ray labels here in the UK that have come into their own in recent years as a credible and, only very slightly, less expensive alternative to Criterion editions and I thought it would be better getting this new edition from The Masters Of Cinema, who seem to have improved considerably over the space of the last ten years in their excellence at acquiring or restoring decent prints and transfers of the titles they put out.

Now I’m not the biggest fan of Rock Hudson and nor am I much familiar with his work. I must have seen a couple of his films with Doris Day when I was a kid and my mother used to avidly watch him on TV in MacMillan And Wife during the 1970s. However, to me he will always be linked in my mind to the production I saw him in as a 12 year old, the 1980 TV mini-series adaptation of Ray Bradbury’s The Martian Chronicles. So even though he’s not exactly done much science fiction like some of his contemporaries were doing around the same era (such as Charlton Heston and Yul Brinner), it’s primarily in this kind of speculative story that I know him as a performer.

Now Seconds is a film which, I have to say I find a bit hit and miss during its almost two hours of running time. When it misses, though, it’s still vaguely watchable and when it hits... well it's really astonishing. I have to say that, for me, the opening of the picture and the first 40 minutes or so of set up, in which Rock Hudson isn’t seen at all, is quite honestly an unbelievably cool and manipulative slice of cinema. This is not to say that there’s anything wrong with Hudson’s performance throughout the film... in fact it’s incredible. However, when his character, or I should say his version of the character, comes into the picture, I did find some of the sequences a bit dull. Still intense but dull... if that’s not too much of a contradiction.

So the film won me over right from the start with a combination of two powerful forces... Saul Bass and Jerry Goldsmith.

Bass’ opening title design is absolutely spooky, as parts of the human face are distorted and stretched in a similar fashion to the way one might perceive one’s own image in a crazy, fun house mirror. It’s all very big, surreal and in your face and I can only imagine how powerful it must have been sitting in front of a huge cinema screen (as they mostly were in those days... huge compared to the majority of those we have now) and being confronted with this. Probably both amazing and seriously disconcerting in equal measure. As the credits progress, different sections of distorted face or head are pitched together in split screens, thus confronting any viewers with an even more unsettling attack on the collective windows of the audience’s soul.

Hand in hand with this is Jerry Goldsmith doing a big sinister piece which starts off gently with violins and small statements, like a chamber concerto, using phrases and orchestration which I personally would associate with generally evil music.... although I’m not nearly enough of a technical expert when it comes to music to know whether the composer used the ‘devil’s interval’ in this sequence. However, to add the complete sense of sinister doom, he then starts bringing in organ tones which certainly did the trick with my dog, who decided it was time to leave the living room at this point. All I know is Goldsmith’s score is a powerhouse along with the Saul Bass titles and, although the film is sparsely but effectively spotted (a Goldsmith trait when the studio allowed for that), it’s an amazing and less than restful score that really heightens the sense of paranoia and tension which I believe the director was probably going for.

Goldsmith’s score continues in the opening scenes of a man being followed by another in a busy train station... although since it’s obviously the beginning of the line, it’s surprising that the passengers chose to sit next to each other in rush hour and were kind enough to leave the main protagonist, as played by John Randolph at this point in the film, a double window seat. However, the sequence astounded me and I was getting very excited because the director was using all kinds of different angles on various moving shots edited rapidly together including... that thing they do where they strap a camera to either the front or back of an actor (both in this case) and film so that the actor’s head or body is kept centre and everything else appears to be moving around him as he walks. Seriously? This seemed out of place and amazing because I thought this was a relatively new approach to shooting, within the last 20 years or so... but here you have John Frankenheimer using it in 1966. So I’m wondering just when this technique started to be used... presumably when industry standard cameras were actually small enough to be able to do this with... and in which film it was first used. Any readers who know the answer to this, please let me know via the comments section for this post.

The film itself concerns a very rich section of the population who want to fake their own death in an elabourate way using a body and major plastic surgery and organ modification (including the vocal chords etc) and our main protagonist is one such person. However, he is drugged and in a wonderfully surreally staged ‘dream sequence’ he is forced to ‘pseudo-rape’ a woman (a company employee) and filmed as insurance that he won’t back out of the deal at some point. The black market but highly successful company which do all this are very thorough in their methods and there’s another wonderfully inventive moment when we see Randolph’s character sign on the dotted line and when we cut to the pen signing it, it’s actually the surgeon’s hand marking up his flesh on the operating table. This is a truly great film for inventive camera work and editing. Although it’s sometimes obtrusive to the illusion of immersion, I found the film to be worth sitting through some of the slightly duller moments for, than I would normally be.

There’s another thing Frankenheimer does early on which is use static cuts of the same character but from longer distances each time, rather than just zoom out. My guess is he does it because he wants to capture the sheer anxiety of the character and slam it home quickly, rather than allow the audience to pull back from the intensity slowly. Whatever the reason he does this though, it’s a pretty fantastic and effective way of conveying the emotions of the actor without diluting it with camera movement. The edit slams you around instead.

When Rock Hudson’s ‘reborn’ version of the character comes into the story as one of the ‘Seconds’ of the title, it begins to come to light that maybe he didn’t make the right decision after all and he’s either a grumpy, unsmiling character or he gets into situations where he goes totally over the top in the other direction. Hudson’s performance is, as I said, flawless but the two party scenes, one in his new home and another outside where he and many others go naked and get in a big tub to crush wine grapes, are actually a little over long and draggy, as far as I’m concerned. And, yeah, I really didn’t expect myself to be saying a sequence which has so many lovely ladies shedding their clothing and inhibitions is a little on the dull side but... I guess every person’s viewing experience is different and that was mine.

Now, there’s an end twist and I thought I knew what it was after about halfway through the movie due to a sequence where Hudson is greeted by an ‘old friend’ at the airport. However, the actual twist, when it comes at the end of the movie, is a lot more pedestrian than I’d hoped for but it doesn’t completely let the movie down and it’s not a bad ending... just a little less than I’d expected from the powerful and claustrophobic set up. Also, I’m not sure but I think the final moments of the movie reveal a flaw in that the person who greets Hudson at the airport in the earlier sequence of the movie now seems to be a bit more of a puzzle than I’d originally thought... but I don’t want to go into why too much, on here, because I want to avoid going into spoiler territory with this one.

So that’s that. At the end of the day, I think Seconds is a movie that genre fans might be interested in. It’s a bit of a flawed masterpiece, it has to be said, but it’s got some really interested visual devices used throughout, has a title sequence by the grand master of title sequence design (not to mention graphic design in general) and a low key but ultimately threatening and powerful score by one of the greatest composers of his generation. So film enthusiasts really should take a look at this one if they haven’t already. Inventive, bleak and with naturalistic performances... a nice little movie, for sure.
Posted by NUTS4R2 at 19:15