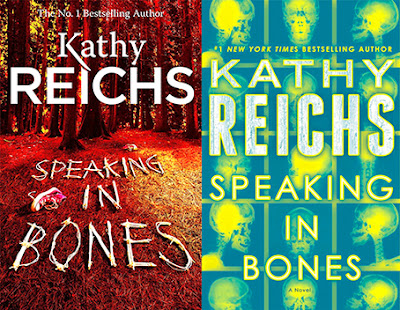 Okay. So due to the same strange twist of fate that meant my annual ritual of starting the new Patricia Cornwell book on Christmas day got delayed, so too was my second annual Christmas routine of reading the latest Kathy Reichs book a couple of days later also put on hold. So this year, this was actually the fourth book I’ve read since Christmas.

It’s the 18th of the official canon of Temperence Brennan novels featuring the character as she appears in this original series... not including any other Tempe Brennan books based on the TV series Bones, of course, which I can’t get on with myself. She’s just not the same Temperence Brennan in the show and seems at odds with the character Reichs has been bringing to life in this series of books over the decades. That being said, Reichs sure makes no bones about placing that TV show into these books as being something her main character watches. She does it again in this one, at least twice... metatextually promoting the show based on her to bring unsuspecting souls into the fold, so to speak.

Once again, Speaking In Bones proves to be a solid and almost un-put-down-able thriller in the series... this one kick starting from an amateur investigator, ‘Lucky’ Strike, who puts Tempe on the trail of a series of murders that have gone unnoticed over the years. It’s here that I first found out that there’s a whole on-line community of amateur investigators going after missing people, investigating cold cases in their spare time and, of course, Brennan’s research into this whole community takes the form of an expository monologue. This brings us readers up to speed a little about this on-line phenomenon which, frankly, I should have probably figured out was already there in the background myself. I just never really considered the idea.

This story teams Tempe up with a new character who helps her in her investigation and, after Lucky Strike soon proves to be not so lucky after all, she continues with her new ally, and often by herself, at the usual breakneck pace of all her books until we get to the end game. Of course, one of the ways the writer achieves this is to employ her customary ‘revelations’ or mini cliffhangers at the end of pretty much every chapter... once you read the last sentence you really don’t want to leave the story for any other occupation you might need to do... like fitting precious sleep into your schedule. You always want to know just what has just happened. To be fair, it’s a technique employed by a lot of writers over the years and I’m not complaining anymore. Reichs is so darn good about the way she throws these little moments in at the end of most of the chapters that it certainly does the trick and takes your time hostage. Unfortunately, that also means you finish the books quicker but... what the heck... there’s always the next year.

One of the niggling aspects of this series is that one of the more popular, regular characters in the books, Andrew Ryan, has been existing in a soap opera state of “is it on again or isn’t it?” romantic involvement with the lead character for a number of years now and... it’s getting pretty darned tiresome. Lovers of this character and his exuberant humour should be warned that the character is really not in this one all that much and that Reichs continues to milk the questionable state of play of the Tempe and Ryan’s romance for all it’s worth in terms of the angst of the main character... not to mention bringing her slowly dying mum back into the story after her involvement with some of the her daughter’s recent past cases. Readers may also like to know that there is, indeed, some progress for Tempe and Ryan by the very end of the book. It’s a little more than the usual impasses although, to be fair, I think the way it’s been left still means that the ‘not quite tempe-stuous’ relationship between the two can still be pretty easily milked as a background element in the lead character’s thoughts.

Actually, one of the reasons she gives to Ryan halfway through the book as to why she’s taking so long to chew over his troublesome marriage proposal is something which almost makes my blood boil. Apparently Ryan is being accused of dashing in to the rescue too often rather than allowing Temperance to exist without that ‘damsel in distress’ element to her character but, frankly, that makes no sense whatsoever to me. I understand that maybe certain factions in the so called ‘battle of the sexes’ might well see this negation of that attitude as something to be celebrated as a call to independence and, if that’s the case, then I’m all for that. However, if you’ve been reading along with her for these adventures since she started writing them annually with Déjà Dead in 1997, you’ll know that quite a lot of the time when Ryan rushes in (pretty much all the times he does this, if I’m not much mistaken) it’s to save her from certain death at the hands of some serial killer or other. Now I don’t know why you’d turn down somebody’s help when they’ve saved your life from painful death on a number of occasions but, I for one, would welcome those kinds of attentions when I needed them. So that kind of hit a false note with me in terms of the characters in this one. Temperance Brennan isn’t exactly dumb.

One other thing which threw me a bit is the lack of appropriate guilt Brennan feels towards one of the characters in the earlier parts of the novel. It’s almost like she’s somehow become a little dehumanised because of the field of work she is in... certainly understandable when you are a forensic anthropologist specialising in bones and you end up involved in the investigations but... I wonder if this was an experienced part of the author’s personality seeping through into the text (who I believe works in the same field when she isn’t busy writing these novels). I also wonder if it’s a conscious decision to depersonalise her involvement with people a little or whether it just slipped in there accidentally as part and parcel of the writer’s psyche. Maybe I’m being a little over sensitive to a particular incident in the novel but it did seem to make the character less realistic for me in certain parts, it has to be said.

Those really are the only moans I had about this one, though. Speaking In Bones is another smallish chamber piece of a novel, rather than an epic orchestra sized skirmish which the character can, surprisingly, sometimes get involved in. It’s not one of the stories with a larger, global canvass but, like all the novels in this series, lives are lost and threatened and everything is a race against time before the killer strikes again. Okay, it’s not quite that formulaic in this one but it hits similar notes... which is just as well really, if you’re writing a crime thriller of the high calibre of these ones. Another great chapter in the life of Dr. Temperance Brennan which Reichs’ regular readers and fans, like myself, are bound to lap up. Looking forward to the next one, for sure.
Posted by NUTS4R2 at 18:45