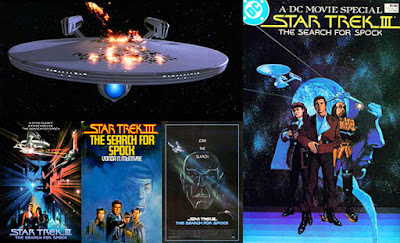 Spock It To Me

So Star Trek II - The Wrath Of Khan was a big success (read my review here) and everyone was suitably moved by the ‘death of Spock’ scenes. However, Nimoy himself had actually started to get into the character again when he was making that film and was now wondering how he could return... at least that’s my understanding of it. I suspect he also kept that to himself when negotiations for this next movie were under way.

Certainly the fans of the original show wanted him back and, since the fans were the ones paying the dollars which made the previous movies such a success, the brass at Paramount were presumably happy to swerve on the side of caution, if they could somehow convince Nimoy to return. There was that little, non-sequitur moment in the last movie where Spock quickly mind melded with McCoy before going into the radiation flooded chamber to save the ship which didn’t make much sense and which could be utilised in the storyline at a later date if needed. The writers didn’t waste much time in doing just that when Nimoy agreed to return to the role of Spock. Using his return as a bargaining chip and parlaying the deal into the opportunity to direct his first feature length movie (although he’d done a few TV shows in the past).

The result was Star Trek III - The Search For Spock, which is rather a sombre affair on many levels and which uses the death of everyone’s favourite Vulcan protagonist from the previous movie as the full plot driver in this one. You also have Kirk going up against a pre-Back To The Future Christopher Lloyd as the Klingon bad guy Commander Kruge. In addition to the main, regular returning cast (including a very brief cameo from Grace Lee-Whitney as Yeoman Rand but with the character unnamed in the credits) we have Merrit Butrick returning as Captain Kirk’s son, David. We also have a returning Saavik, with Robin Curtis replacing Kirstie Alley in the role, as Alley was apparently holding out for more money.

Although Mark Lenard returns after playing a Klingon in the first movie, this is the first time he reprised his role from an episode of the TV show... that of Spock’s father, Sarek. It wouldn’t be the last time he played the role on film nor, indeed, on TV (he also continued the character in a further two more movies and in two episodes of Star Trek: The Next Generation). He’s pretty good here and lends the utter tomfoolery of the ridiculous plot line a certain gravitas which I’m not sure William Shatner and De Forrest Kelly could have necessarily compensated for on their own. He performs this role pretty well and he’s had the privilege of playing a Romulan, a Vulcan and a Klingon between the TV series and the films... a pretty good track record, I guess.

The film and the miracle of Spock’s rebirth involves the placing of his spiritual soul in Doctor McCoy’s head from the end of the last film and the joining of it with a reborn Spock. As you may recall, Spock’s lifeless body was fired onto the newly created Genesis planet in a photon tube as a makeshift coffin at the end of the last movie. It turns out that Kirk’s son had used dangerously unpredictable ‘proto-matter’ in the making of the Genesis torpedo and therefore it’s highly unstable but, conveniently, also has the properties of regenerating whatever organic material is already on the planet. So we watch many versions of Spock as he grows rapidly from child to Leonard Nimoy within the space of a day, as the planet begins to break down. The tricky idea of the old Vulcan sex drive during their “once every seven years after adolescence” state of Pon Farr is also invoked, a condition that was established in the 1960s TV episode Amok Time. Luckily, young Spock has Saavik to help get him over this. That being said, the fact that this involves having groovy Vulcan sex with him every condensed version of the seven years cycle is kinda glossed over on-screen and symbolised with something which looks more like futuristic hand sex straight out of Barbarella than anything else. Apparently, Saavik falling pregnant with young Spock’s child was cut from an earlier version of the script.

With some fairly fake looking sets and a storyline which brings up convenient plot elements just to reach the end goal of rebirthing a major character, it’s not the best of the Star Trek films, for sure. That being said, Nimoy’s direction is, at the very least, highly competent and this must have proved a good training ground for him when it came to his absolute masterpiece... the very next film in the franchise. Kirk’s reaction to the cold blooded murder of his son is dramatic but, as in a lot of Hollywood movies, the grieving process one might expect from this is forgotten about fairly quickly in the name of ticking off the next box in the ongoing plot line.

One of the big things this movie had going for it back in the day, possibly to compete with killing off Spock in the previous movie, was the destruction of the famous Starship Enterprise. To paraphrase another character, Kirk “turns death into a fighting chance to live” by evacuating the small crew of the Enterprise and destroying the majority of his enemy in the process. This is the last time an Enterprise would bear the markings NCC-1701 without the addition of a letter after the last digit. It was actually quite a spectacle when this was released and it still looks good today. Alas, the destruction of the Enterprise has become a bit of a dramatic crutch/cliché in the franchise over the years since but, people should remember that this was the first time the unthinkable act was first executed on film (or TV for that matter). It had some impact.

Although, as a whole, the movie hasn’t necessarily stood the test of time, there are some really great scenes in here for some of the ‘second tier’ regular actors such as Nichelle Nichols, James Doohan, George Takei and Walter Koenig and, for a couple of them, quite possibly the best moments their characters have had over the years. It’s also nice that this movie turns the crew into fugitives from the Federation... something that would have long term effects on the characters but would be resolved in terms of their allies/enemies of the Federation status at the very end of the next movie in the cycle, which forms a kind of unofficial trilogy with this and the previous movie.

James Horner returns to score this movie and, barring a few bars of Alexander Courage’s original TV show theme in the first three, this is the first film in the franchise to maintain a sense of musical continuity with the previous one, with Horner reusing his themes (and possibly a few other composers’ too, maybe) and delivering a beautiful but, perhaps, more sluggish score than he did on The Wrath Of Khan. Some people mistakenly call the score to The Search For Spock a basic retread of the music he provided for the previous movie but I think there’s a little more to it than that, to be honest. It’s not a bad score but, at the time, I was still reeling from it not being anywhere near as cool as Goldsmith’s score for the first movie. To be fair though, that first one is a masterpiece of music that would be hard for even Goldsmith to top when he returned to the movies for the fifth, eighth, ninth and tenth films.

And that’s that for me and Star Trek III for at least another 5 or 10 years I reckon. It’s a film which hasn’t really aged all that well but which is certainly a crucial watch because it’s the less satisfying filling in the sandwich created by the two much more interesting films on either side of it. Not one you can miss if you’re a fan of the show and movies, for sure, but not the most exciting time committed to celluloid in the name of Starfleet and which leads on directly into, arguably, the highlight of the entire series... so I’ll be reviewing that one soon I guess.