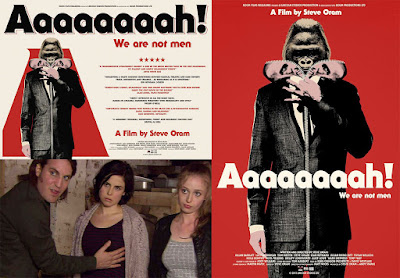 Pant-hoot - noun: A breathy hooting or honking call uttered by a chimpanzee, typically in a series rising in a screaming crescendo and tailing off with quieter calls; a series of such calls.
Oxford Living Dictionary.

If you’ve seen Steve Oram’s movie which he co-wrote and starred in with Alice Lowe... Ben Wheatley’s  Sightseers (reviewed here)... you’ll no doubt already know that this guy’s film projects are worth watching. Even so, this movie was not even on my radar until a friend of mine recommended this film to me (along with a few others which will make interesting review material) when I was touring the merchandise stalls at the Frightfest last August. Well... I say recommended it. What happened was we were looking at the stall where all the Fright Fest* branded films were and I pointed to this one with a dubious title and a strange cover of a gorilla unzipping from a human suit and asked him if he’d recommend it. He looked at me with a smile on his face and said he really loved Aaaaaaaah! but that he was reticent to recommend it because it’s extremely bizarre. I then went on to explain to him that this statement was, in fact, the best recommendation he could give me so I went for the extremely ‘value for money’ purchase of the blu ray version. I didn’t realise just how ‘value for money’ that was until I finally got around to watching it this gem.

Aaaaaaaah! is one of the most insanely entertaining, completely unique and mesmerising movie watching experiences you can have. It's even just a little mind blowing in some places but... you know... mind blowing in that good way. If you’re anything approaching a cinephile or even a casual watcher of movies (like myself) then you really need to be grabbing this one and seeing what all the fuss is about as soon as possible.

Oh, wait a minute. What fuss? There hasn’t been any notable fuss about this and on checking the internet, I can’t even buy this for any of my American friends because it’s never even been released over there. This is definitely a 'crime against filmanity' right there and some wily distributor needs to rectify this as soon as possible.

The only thing I can liken this film to, in my history of watching good movies, is the very first time I watched David Lynch’s Eraserhead. Aaaaaaaah! is one of the great moments of movie art of the 21st Century and it needs to be seen by anyone who is in love with cinema. Although, saying that, it’s got some pretty strong imagery at times and it’s not exactly ‘safe for work’... or for relatives, for that matter.

So what is the film actually about? Well, I’m not 100% sure that’s the right kind of question for this kind of movie experience although it does, when you think back on it, have a sort of story to tell. This is how the movie starts off...

Steve Oram and his friend trek into a forest. Oram gets out a photo of a bride, presumably now deceased by the expression on his face. He puts it on the floor and, rather than bury it, his mate starts pissing on it before Oram stops him. Oram then whips his own cock out and starts defecating on said photograph, while the tears of grief are still streaming from his eyes. His mate then cleans the head of his penis and Oram goes to have sex with a tree while the other squats and watches, before they go off to see what else is going on.

After not very long you will realise that all of the inhabitants of the movie, who are speaking in grunts and groans and using their bodyies to communicate just as much as their vocalisations, are in fact apes. That’s the premise here... everybody is a physically a human being living in a, mostly, human world, but they are all of the mindset of apes and so you get a thorough and blindingly funny, dissection of the way their small tribes (or family units in human terms) interact with each other.

They have their own TV show showing a cooking programme, hosted by a lady with her breasts on display as part of her outfit as she prepares to roast a hog and also, cover it in sugar (or perhaps salt but my guess is sugar). When two ladies go out to do a bit of clothes shoplifting, they are caught by the manager and his assistant which, obviously, means they have to be molested by said shopkeepers... before one of the girls does something a little more drastic to cut short the assistant’s pleasures.

There’s even a party scene with various apetastic social interactions on display such as a courting ritual for Oram and one of the girls and a teabagging moment (which will lead to a heck of a lot of trouble for some of the characters later in the film). The shindig is presumably thrown by the mother figure of the household, played brilliantly by once-upon-a-pop-star Toyah Wilcox. In fact, all the actors in this are absolutely brilliant. If you want to see some absolutely amazing, Oscar worthy acting then this movie is the absolute epitome of unbridled expression to achieve an end. And we see the soft but ferocious hidden sides of characters too, like the one I call Battenburg man (played by Julian Barratt), who carries his Battenburg cake with him as a precious object and even, in one instance, uses it as a makeshift brush to help paint the walls of his new family’s home.

But it’s not just the acting, of course.

The point is, how did Oram’s mind actually map this thing out in the first place? He’s said he was watching a video of two tribes of gorillas, one of whom was attacked by the other and about the death and rape in that moment and the reflection of it by the male apes of the attacking tribe afterwards. Well, I don’t know how Aaaaaaaah! was filmed but I am assuming that the majority of the cast and crew had to get pretty familiar with the rituals and habits of the various ape families to be able to turn in the enthusiastic performance they did here. Especially since the whole thing was apparently shot in two weeks.  I’m assuming that there was a fair amount of improvisation on the set too but, as I intimated earlier, there’s certainly a structural narrative in place. I’m also pleased to say that the final denouement of the movie is something I did not, for once,  see coming... so I’m really pleased about that. The point is, though, the story line does kinda work towards that ending in a few sections of the film but I was sufficiently misdirected to not figure out what the end pay off to that was (and I’m not 100% sure now I'd have been able to second guess it anyway). But I do know it didn’t let me down.

The camera work is fairly roaming and energetic in certain places, as you’d expect, but the edit makes it all work really well and not seem jarring to the eye at any point. It’s already jarring to the mind in some places, to be honest, and that’s not a bad thing. Usually I rely on the score to unify this kind of stuff and, about that...

The film soundtrack uses a lot of synthesised, zany sounds and beats and I wasn’t sure about this matching up with the tone of the movie until I realised that this simplistic approach may well appeal to the apes/people inhabiting the movie and then it all clicked into place for me. So when we see montages like Oram and his new lady friend, played insanely well by Lucy Honigman, going shopping while he is still carrying around the arm he tore out of another character in the film, the music provides a narrative about the absurd simplicity and intensity of the lives we are watching, even as it helps glue the edit together. I’m actually not sure, now, whether those particular scenes I just described actually have any music on them but... you get the idea. It’s a clever modus operandi for the film and it works a treat.

And there’s not a heck of a lot more I can add to this, to be honest. Is this a solid recommendation from me? Yes, of course it is. I think anyone who’s into film should pop this on in the format of their choice, possibly cover it in sugar and watch it until their eyeballs show signs of falling out. Easily one of the most original works I’ve seen in quite some time and I’ve already inflicted it on one set of friends with, I expect, more to follow (yeah... sales of Aaaaaaaah! are going to be going up a little sometime soon, I reckon). Not something for everyone, I would say but, even if you don’t actually like the movie, it’s definitely an experience and you should probably, at least, try it once.

*Although why this movie was branded up with Frightfest is anybody’s guess... since it’s totally not a horror movie.
Posted by NUTS4R2 at 19:00