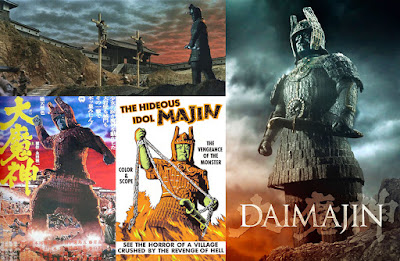 Daimajin all the people...

I’ve been wanting to see this trilogy of pictures fusing ancient Japanese culture stories, reminiscent of classic chambara, with the kaiju eiga movie craze of this (and many other) periods in Japanese cinema for quite some time. Now, thanks to Mill Creek Entertainment, people are finally able to see the Daimajin movies in a restored transfer and, most importantly, with all the films in the correct aspect ratio. Which I’m very pleased about.

After a really fiery but beautiful set of opening credits ending with a quite surreal, eyeball shrinking into a mountain moment (which kinda makes sense in a way when you hear the legend of the Maijin and the Daimajin), we have a really creepy atmosphere evoked as the camera tracks a landscape near a small community. We hear the legendary Majin stomping about and the people of the village start their prayer ritual to keep the Majin locked in the hillside, where the giant statue of Daimajin keeps watch over him and ensures this God is trapped.

We then see the viewpoint of the ruler of the village and... he’s a pretty sympathetic guy and a supporter of his people, which is almost a rare thing for a Japanese period piece. Alas, he and his wife are killed in a coup (the noise of the alleged Majin a distraction which allows this to happen easier) and his young son and daughter (played by Yoshihiko Aoyama and Miwa Takada) flee with their guardian, Kogenta (played by Jun Fujimaki). Hunted, they make contact with the high priestess, who has been told to stop all the religious malarkey by the new and ruthlessly evil ruler of the village, Samanosuke, played by Ryûtarô Gomi. The new guy enslaves the good people, makes them work for him and takes away their livelihood in the name of taxes etc. The three main protagonists of this story, the guardian and the two heirs, are hidden in the forbidden mountain in a ‘cave with a view’... a view of the Daimajin guardian.

Then, as if by the magic of a scene transition, ten years have passed. The son and daughter are grown up but all three still live in the cave and are still wanted by the head of the village so they can be put to death. Then, things start to rapidly go wrong for everyone and, eventually, all the main characters are either dead or in the process of being crucified except for the daughter and a young boy from the village. The priestess who was helping them is killed but the new chief orders the Holy Daimajin statue destroyed in order to stop the people from believing in something. However, it’s not as easy as it looks, even when a giant nail is driven into the statues forehead to try and get some kind of damage done, frightening all the bad guys as it starts dripping blood. They leave the mountain as the powers of the elements are unleashed upon them and the daughter preys for the Daimajin to help... which it does by standing up and going on a bloody rampage through the village until justice prevails.

That’s a much simplified version of the story but its enough to give you a taste and the film is beautiful to look at with some gorgeous cinematography and some not half bad special effects to boot. When the boy proceeds up the ‘haunted mountain’ to prey fro help at one point, the wispy bits of cloth denoting ghosts are very nicely done and the skeleton’s hand which grabs the boy is also another nice touch, as he looks around again and it’s just a hand-like branch tugging at his clothes.

What’s interesting is that it’s almost, but not quite, bloodless compared to some of the other Japanese films coming out at the time. It’s almost like it’s a children’s film in that respect. You won’t find any arterial sprays of traditionally energetic, Japanese blood fountaining out of bodies on this one and very few wounds, life threatening or not, actually visibly bleed (aside from the spike which stays firmly lodged in Daimajin’s head for most of the last act and a few, slight, bloody wounds to the heroes)... even during a torture scene. That being said, and perhaps I’m giving it away by mentioning that it even has a torture scene, the film is actually quite nasty and violent in its attitudes and one wonders whether the target audience for this was actually a family audience or not... especially since their are some quite prominent child characters in the story.

For instance, even the come uppance of the bad guy at the hands of Daimajin at the end is a curious blend of bloodless viciousness. After smashing the house in which Samanosuke has fled into, he picks him up (in the same way King Kong might have picked up Fay Wray in the 1933 original - reviewed here... and there the similarity ends), holds him up to one of the wooden crosses, slowly and lingeringly pulls the giant nail from his own head and then impales the villain against the cross with it. This last moment plays off screen but the act in itself is quite nasty, although not entirely unexpected because I was waiting for Daimajin to do something fatalistic with that giant nail sticking out of his ugly bonce since Samanosuke’s men first drove it into his vengeance filled noggin.

As I said, though, the film is not really a violent picture compared with many others made around the time and it's full of some nice, tidy compositions and bright colours which are a pleasure to watch. And the slow build to the final resurrection of the Daimajin from his stone drenched sleep is nicely paced and a good pay off for the long build up. The film even has a typical score from legendary composer Akira Ifikube which is quite appropriate and, like a fair few of the cast and crew here, Ifikube was also someone who worked on a number of Zatoichi films over the years.

And that’s all I’ve got on this one, really. I was half hoping that the film would be set in the 1960s so I could see a full on Tokyo stomp but, even so, it’s a pretty cool attempt at doing something a little different to the large influx of giant monster movies the Japanese were presumably being inundated with at the time and I had some good fun with it. Looking forward to seeing the other two in the original trilogy sometime soon so... yeah, more Daimajin reviews to come in the near future.