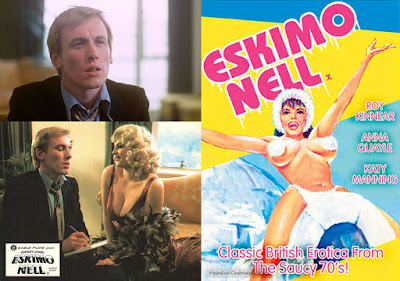 Eskimo Nell
UK 1975
Directed by Martin Campbell
88 Films Blu Ray Zone B
From the director of Goldeneye, The Mask of Zorro and Casino Royale comes... oh dearie me. Another, quite atrocious, British sex comedy.

And, yes... it’s that Martin Campbell.

I was given Eskimo Nell for Christmas by the wife of a friend (who is also a friend, obviously). I don’t know why people take a look at a Blu Ray, see that it’s got Mary Millington’s name prominently displayed and then think of me but... well, I guess I just evoke ‘quality film’ when they bring me to mind. ;-)

To be fair, I’d been curious about this movie for a long time, mostly for the Millington connection but, in regard to Mary’s appearance in this, all I can is that for someone who gets prominent billing in the casting on the box when she’s in the film for, maybe, less than 10 seconds with her footage played at high speed as she does a strip as part of an ‘audition’ montage... is that it’s nice she’s still so well remembered. She appeared in this a couple of years before she made the first of her two breakout hits, Come Play With Me (reviewed here) and The Playbirds (reviewed here) and there really isn’t much to see here if you’re a fan of the actress. Although there is a more Mary-centric short movie included on the extras. The product description mentions her turn here as an “eye popping cameo” but its more of a “don’t blink or you’ll miss it” kind of affair, I have to say.

What’s more interesting is that, although it’s a bit of an ensemble piece, the lead actor who plays the main character, as I see it, isn’t even listed on the front of the box at all. So one has to wonder what that actor must have thought of appearing in this that he’s somehow managed to have his name ommitted from the main cast list on the packaging. Oh yes... I’m looking at you Christopher Timothy, aka James Herriot in the hit TV show All Creatures Great and Small.

The film starts off with a voice-over song giving singing narration about a young graduate fresh out of film school, who we see tripping around all the usual places in London, trying to get a job as a director. There are some nice visual and audio references to places like the Hammer film company on Wardour Street and the like and, as this song continues, said young man is kicked out of various studios until he starts looking at the rock bottom places working straight from Soho, landing a job from producer Benny U. Murdoch as played by Roy Kinnear. You can tell exactly the kinds of films Murdoch and his backers make from the posters adorning the walls of various offices... The Sexorcist, King Dong, Vampire Vomit and Motor Bike Orgy. There’s even a poster for the Doris Wishman directed movie, Deadly Weapons, starring Chesty Morgan in Murdoch’s office (which I reviewed here). It becomes clear that he specialises in making ‘sexy’ sequels to ‘real’ movies such as his sequel to Son Of Cochise... Keep It Up Hiawatha.

This is not the kind of role I would equate with Kinnear, the national treasure who was often on TV in the 1970s and 80s, not to mention his work in some prestige film roles such as The Three Musketeers (and its two sequels). Here he plays a ‘tits obsessed’ producer who measures anything of quality in terms of how it can be boiled down to sex (when he’s not getting undressed and trying to demonstrate his prowess in this particular area) and he clearly wants a porn film made by the new graduate. So the new guy says yes and enlists his friend, the penguin obsessed writer Harris Tweedle, as played by the aforementioned Christopher Timothy, to write a script.

The rest of the film comprises the exploits of the director, his agent and the writer as they accompany the producer securing backing money from various people and then find their script requests (not to mention leading lady requests) getting more contradictory and impossible as the quest for production goes on and they interact with a cast list for this movie that... yeah... you really wouldn’t associate with this kind of endeavour. There’s Christopher Biggins... as the son of a ‘Mary Whitehouse’ character... and his sister who is dating the director and who happens to be played by the great Katy Manning, who played my favourite Doctor Who companion Jo Grant in the early seventies. Her inclusion here alone makes the acquisition of this film a necessity in my book although, it has to be said, she’s totally wasted in this.

So, anyway, when Kinnear’s character absconds with all the money and our three heroes are left responsible for it, it’s up to them to write and direct four different versions of the movie for each of the backers, including Katy Manning’s character’s mum, who is all about purity and censorship in cinema. So, yeah, they have to do a Christian parable, an out and out porn version, a gay S&M version and, my favourite, the world's first Kung Fu musical... which in this case also involves a lot of nuns and is somewhat based on The Sound of Music... but with added kung fu action.

Now, even though this is a truly terrible film and might test the film stamina of a certain type of audience, there are some nice ideas in the mix, to be sure. Although I found most of it to be pretty unfunny, there were a few things that made me chuckle. Such as a line from one of the backers explaining what he wants in the movie. “Hardcore, plenty of flagellation, rubber appliances, throw in some bestiality as well... then in the second scene...” and so on.

There’s also a long montage sequence showing the lads on set as each of the four versions of the movie are directed which is where, for me, the most laughs come from. The sequence where one of the Eskimo Nells and her leading, Asian actor are singing a line of verse before kung fu-ing one of a series of nuns in repeat mode did make me smile somewhat. However, all that being said, it’s generally a bit dull and less than witty, for the most part. Like a downmarket version of a Carry On film but with added anatomical detail.

It’s funny... back in Germany in 1962 some young directors got together at a film festival and drafted a document called the Oberhausen Manifesto because they were worried about the direction of German cinema, much of which had devolved into soft core sex comedies as their chief product. Ten years later many of these directors were pushing at these boundaries and producing interesting movies and are now more well known as starting the New German Cinema... or what was the New German Cinema. Meanwhile, in the UK, despite all our kitchen sink and cinéma-vérité stuff which was getting critical acclaim at the time, there were still a lot of sex comedies being produced and one wonders whether a similar protest to the backdrop of this kind of product was going on behind the scenes, so to speak, in Great Britain at the time. It seems to me we were somewhat lagging in these kinds of areas (and no, I don’t hate sex films, just making a comparison to the creative climate in different countries, is all).

And that’s about it in terms of my take away from Eskimo Nell except for... just one more thing. I’ve mentioned on this blog before that I was a professional child model in the very late sixties to mid 1970s and it’s always good to see various London locations like Wardour Street, Piccadilly Circus, Leicester Square and the surrounding areas used in a movie like this. It’s a London which can only exist on film now and it is always nice to see and remember various landscapes which are still there, mostly, but populated with different shops etc. Seeing things like the old Athena shop on Leicester Square (a regular haunt) with a Wimpy Bar right next to it brings back a fond rush of nostalgia for days gone by. So, you know, even if Eskimo Nell isn’t your kind of thing... if you’re as old as me, you might want to take a look just for the unexpected trip down memory lane, as our intrepid film school heroes run through the streets of London trying to put right the consequences of their actions. It was kinda fun, I guess.