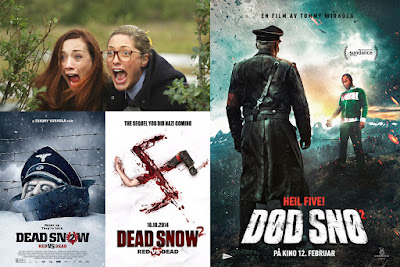 Warning: Some comedy spoilers in this one.

Okay, so Dead Snow 2 - Red Vs Dead is Tommy Wirkola’s follow up movie to his fun nazi zombie flick Dead Snow. In between that movie and this one, he also found time to direct an amazing Hollywood movie called Hansel And Gretel - Witch Hunters starring Jeremy Renner and Gemma Arterton (which I reviewed here). Both of those films were pretty great and I was very happy when I heard that he would be doing a sequel to the latter of these two movies. Alas, something threw a spanner in the works and that proposed sequel to Hansel And Gretel - Witch Hunters, which I really wanted to see, seems to be dead in the water. So after this he went back to his big breakout movie and has come up with a sequel to Dead Snow instead.

Like both the aforementioned movies, Dead Snow 2 is pretty violent and gory and, like the original, is definitely bleakly comic in tone. Although, saying that, it seems to be a much broader comedy than the first, from the little I remember of the original.

The action starts off right from where it left off with the one surviving member of the original movie, Martin (played by Zegar Hoel), sans arm which he had cut off to presumably stop zombie infection, getting the audience up to speed with a voice over narrative as images on screen recap the first movie for us. We then carry on straight from the moment with the zombies attacking him in the car for the very last coin of the discovered nazi gold which caused all the trouble in the first place. After a big tussle where the zombie leader, Herzog (played by Ørjan Gamst) also loses his arm in a car vs zombies chase, Martin gets clear of his enemies but loses consciousness when his car takes a bad tumble down a mountain. When he wakes up, he is in a hospital in police custody... suspected of killing all his friends. Worse yet, the team at the hospital have assumed that the arm found in the car with him was his and have successfully managed to graft it onto him in an operation.

The zombie arm causes some trouble but, after many more deaths, he escapes and manages to get his homicidal zombie arm under control... mostly. It’s also established that a zombie bite doesnt turn you into a zombie at all... so I’ve got no idea why he cut his own arm off in the first movie, to be honest. It might well make sense but I just can’t remember and it does seem quite illogical here.

Meanwhile, Herzog and his nazis don’t return to the ground after all. Instead, Herzog decides they will complete his final mission to travel to and wipe out a town in Norway. Meanwhile, at a war museum where Herzog’s men go nuts killing tourists while Martin and the curator hide in a corner, Martin eventually meets up with a small American group who have flown over to Norway to help him. Known as Zombie Squad, they consist of three nerds known as Daniel (played by Martin Starr), Blake (played by Ingrid Haas) and Monica (played by Jocelyn DeBoer). Monica is pretty fun, actually, because she tries to get as many Star Wars quotes in as possible, wears an “It’s A Trap” t-shirt (quoting Admiral Ackbar in Return Of The Jedi - reviewed here) and has a genuine replica pair of macrobinoculars modelled on the one that Han Solo uses on the planet Hoth in The Empire Strikes Back (reviewed here).

Our heroes also discover that Martin’s new left arm, which does keep giving him many Dr. Strangelove moments, it has to be said, can also raise the dead to do his bidding so, while Herzog steals a tank and proceeds to take his zombie army towards the town that Hitler originally ordered him to destroy... Blake, Monica and the curator are left behind to distract him en route while Martin, Daniel and their new zombie sidekick go back to the snowy mountains to raise an army of dead Russian prisoners of war that Herzog killed back in the 1940s, their bodies still preserved in the icy, cold ground.

As zombie movies go... it’s not a bad one. It’s quite gory although the gore isn’t as in your face or visceral as what I remember of the first film. As I said earlier, there’s definitely more emphasis on out and out, slapstick comedy in this one and it’s kind of a trade off between that and taking any of the main characters seriously. It somehow manages to de-tooth everyone just a little bit here but, at the same time, it’s still pretty good so you are not going to leave this one without at least being entertained.

Such comedy set pieces include a husband getting turned on by a girl in the newspaper and shouting out to his wife to get herself ready because he feels like ‘a little head’. The next thing you know, one of the nazi zombies has appeared and has literally thrown his wife’s dismembered head into his lap. Another piece of grizzly humour comes when two Nazis each pull the innards out from either side of a man’s stomach and, while he is still connected, use his intestines to siphon petrol into their newly acquired tank. We even have a zombie doctor who patches the soldiers up in the midst of battle during the final showdown scene, replacing zombie innards with bales of straw to keep them going and sticking a sink plunger where a leg is missing on another to allow him to stagger back into battle. So, yeah, lots of comedy moments in this one.

Ultimately, though, I somehow felt kind of let down by this one. Maybe it’s because there’s actually not much snow in this second movie... and I really like movies which feature a lot of snow. Saying that though, the characters are all pretty likeable and well acted and, although I didn’t actually care what happened to any of them, I still found myself fairly amused by various scenes as they played out in front of me. It’s not exactly the best nazi zombie movie out there and, truth be told, not nearly as good as the same director’s previous two films but, having said that, I’m pretty sure that if you’re a fan of the first movie then you will probably be okay with this second one. If you do watch it, though, wind to the end of the credits because the film gives us a little scene which sets up the possibility of yet another sequel. I don’t know if that’s been planned but, yeah, it wouldn’t surprise me if the director goes to revisit this genre for the third time at some point in his career. In the meantime, Dead Snow 2 - Red Vs Dead, keeps the nazi zombie sub-genre of film fresh and alive in a decade which is in danger of forgetting that this was ever a genre at all.
Posted by NUTS4R2 at 19:47