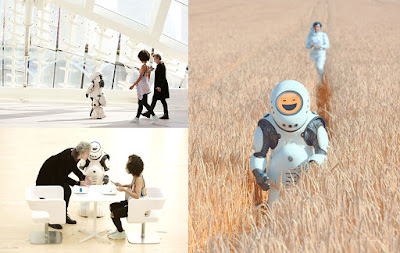 Okay, so episode two of the new series is another pretty good one. Not nearly as strong as last week’s set up, for sure, but as a stand alone story without too much of the series thread going on in it (I’ll get to that in a minute), it made for a pretty satisfying episode... although a familiar enough one in terms of the variety of stories you get on the show. And, look, it would be pretty hard to do a story type which hasn’t been done in the 50 plus year history of the show so, you know, this is not a problem.

So we have an episode which carries on exactly where we left off last week (I’ll get to that in a minute, too) with Bill entering the TARDIS for her first proper expedition, this time to a planet in the far future where a colony has been built for one of the fleeing starships who were evacuated from Earth sometime in our far future. After some slight stuff with Matt Lucas to remind us of ‘The Vault’ that The Doctor is supposed to be guarding, something which is brought up later in the episode too, just so we don’t forget about it for sure, The Doctor and Bill find themselves in an empty colony populated by inadvertently lethal micro-robots, like flying nanites, and their silent, emoji speaking robot interfaces. A, very slight, mystery for The Doctor and Bill to solve as they penetrate to the heart of the robot town/colony to the actual starship it was built out of, the Erewhon (the name of which is apparently a Victorian reference I was completely oblivious to... thanks beckygracelea of twitter... and which also happens to be an anagram of Nowhere... and was also a Star Trek spaceship etc). There, while The Doctor attempts to blow the place up before the emojibots can call their mechanical masters to strip future settlers of their skin, tissue and organs before grinding up their bones for fertiliser, Bill makes a more interesting discovery.

Okay so, it really wasn’t a bad one and I like the way this series is going. It was nicely shot with some very neutral, white corridors offset with some much more colourful lighting schemes when The Doctor and Bill finally reach the actual starship at the heart of the town. It was fairly fast paced although some of the sequences, like The Doctor trying to park Bill back on the TARDIS before they both go back, seemed a little like padding, in some ways. Nice padding, though, so that really doesn’t bother me.

Bill seems to be working out really well as a companion. She has a nice chemistry with Capaldi and so it’s a shame that Capaldi and, I strongly suspect, Bill, will not survive the end of the year in the show.

Last week I had some pretty wild theories about Bill, one of which of her actually being a former incarnation of The Doctor’s grandchild Susan Foreman and regenerating at the end of the year to be left with the William Hartnell incarnation of The Doctor. You can read my full blown speculation and possible variants in last week's review here. Now, as it happens, there’s already a scene here which, at least on the surface, confounds that issue. When Bill expresses she is starving, a table is set for them both... one plate has two jellies and one plate just the one. Bill takes the plate with one and The Doctor speculates that two jellies were laid out for him because he has two hearts and she only has the one. So that would rule out timelord then, in her case. Unless, as I originally assumed, the computer set the two for her because she was more hungry. That being said, if 'The Doctor and River’s' daughter, then maybe her mother’s partner was a human in which case... it might explain why she has one heart. Or maybe her mother was the wife of The Doctor and River's son? Although, if that’s the answer then I shall be grumpy because... the first episode of Doctor Who was called An Unearthly Child for a reason.

So that does seem to rule out Bill being The Doctors grandaughter... or does it?

That thing about the jelly really could be a cunning ploy by one of the writers to throw us off the scent, perhaps. After all, I’ve had to grow accustomed to the writing on the show getting very devious over the last 6 or so years for that very purpose, it seems to me. So I’m not completely ruling out that theory yet and, as fuel to my wild eyed fan boy-like fire, the cat was kinda let out the bag earlier in the week that David Bradley is returning to the show for this year’s Christmas special, which is also touted as Capaldi’s swan song. Now Bradley, as you probably know, did a wonderful turn as part of the 50 years celebration of the show in An Adventure In Space And Time (reviewed here) playing William Hartnell in that drama about the making of the first few years of Doctor Who. Now, although Bradley has already played a totally different role in the show a few years back, I can only assume that he’s coming back at Christmas to play the ‘Bill’ Hartnell incarnation of The First Doctor so... we shall see?

Meanwhile we also have to solve the mystery of what’s in the vault The Doctor is supposed to be guarding. Is it just an empty blind to hide the mystery of Bill, hidden in plain sight, or is it something more tangible like, oh, you know, Gallifrey. Only time will tell, I guess.

The end of this story dovetails straight into the next episode with our weekly time travellers already arrived at their next destination for next week’s shenanigans... which is similar to the way this episode picked up straight from where we were last week. Now this is quite a nice because it's the way the old shows were formatted in the days of William Hartnell and Patrick Troughton, with the end of the story leading into the next. So the show runner and writers are definitely going for that ‘old school’ feel in this series, which is cool... especially for old timers like myself.

So there you have it... I really don’t have much to say about Smile other than it was a pretty solid installment and definitely worth a revisit when the inevitable end of year Blu Ray set is released. Really enjoying this show again and really liking the way Capaldi’s version of the central character has developed.
Posted by NUTS4R2 at 12:10