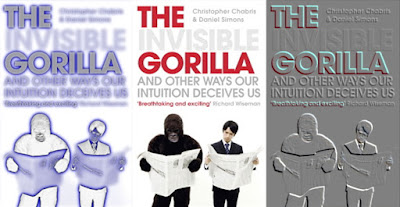 The Invisible Gorilla And Other
Ways Our Intuition Deceives Us
by Christopher Chabris and Daniel Simons
Harper Collins
ISBN: 978-0007317318

I received this book as a gift from a very special friend on the occasion of my Birthday earlier in the year and it’s a pretty amazing read, I have to say. The Invisible Gorilla: And Other Ways Our Intuition Deceives Us starts off by highlighting the original ‘Invisible Gorilla at a basketball match’ test of awareness which was originally conducted by the writers and which, I’m guessing, a lot of UK readers will better remember as the 'Moonwalking Bear test' which was featured on a long running cinema advert over here a few years ago.

Basically, the test comprises of a basketball match between two teams... let’s say one team are wearing white tops and the other are wearing black tops. The viewer is asked to count the number of passes the white team make over the length of the short clip. As they are busy counting the passes, a large percentage of the viewers will fail to notice an unusual thing which happens in plain view because they are so busy trying to count the passes. In the original test a man in a gorilla suit walked into the centre of the pitch and started beating his chest before he exited (in the advert I mentioned above, it was a man as a moonwalking bear). The point is, because most people are busy concentrating on something else, anything that is remotely unexpected and which the test subject does not know is coming, will often be completely invisible to them... even when it’s staring you in the face (and possibly beating its chest with vigour).

Now this is as good a justification as any to explain why I lose my socks even though I'm always told they’re right under my nose... so, if nothing else, this book has helped me rationalise and excuse my potentially sockless existence. However, it also highlights how dangerous the world is to people and that we need to understand that, although we think we are paying attention... we’re often just labouring under the illusion of attention, which can be pretty problematic at times. For instance, how many people driving in cars hit bicycles because they didn’t see them... even though they had been looking straight at them for a while? You often look without seeing and this blindness to anything even marginally unexpected can often catch you out, with some pretty serious consequences.

And that’s what this book is about. It pinpoints several different types of ways (not just the ‘attention blindness’ demonstrated in the Invisible Gorilla experiment) in which our minds are playing tricks on us in the interest of holding a mirror up to the human race and highlighting the various ways we are deceived and, indeed, often deceive ourselves.

For instance, an example is given of comparing people who were in the same rooms as each other when the horrific events of 9/11 happened, a little while down the line from that point in time. If you’ve seen Kurosawa’s magnificent adaptation of the short story Rashomon, you’ll know how different the same set of events can seem to different people. This was played out when certain people in this book were asked to explain their recollections of the event and how they reacted to it at the time. Bearing in mind that what people were doing when events like 9/11 or, say, the assassination of JFK, were happening tend to be the moments people purport to remember most clearly... it turns out, we don’t remember them very accurately at all... even though we believe we do. It’s all in the mind and your memories ‘renew’ and slightly somehow rewrite the facts after a certain amount of time.

Another good mental obstacle highlighted here is the illusion of confidence. A sample is given which is of a doctor looking up something in front of a patient as opposed to a doctor who will listen to the symptoms and very quickly give a diagnosis and a positive course of action. Most people would trust the second doctor much more because they are absolutely confident in what they are saying. However, it’s much better to have been seen by the first doctor in this example because that doctor is not subscribing to the illusion of confidence that the brain is telling him, or her, is the correct direction for this medical examination. And what this book does is to tell the truths about a lot of myths surrounding the human brain and our awareness of it. Although I am kind of angry that the authors debunk the idea that the male of the species can’t multi-task. That’s one of my favourite excuses for not doing things just gone flying out the window then.

Another good example of the illusion of confidence and, perhaps, the illusion of knowledge which the book also goes into, would be the case of the crook who robbed a store in the US, even though he knew the in-store surveillance camera was on. This was because he’d rubbed his face in lemon juice before committing the robbery, safe in the knowledge that lemon juice can be used as invisible ink so it stood to reason, obviously, that rubbing his face in the substance would cause his features to be rendered invisible. The guy was arrested hours later, is my understanding of it.

Another brilliant example based in real life research is the illusion our brains give us of being able to see correlation and patterns, cause and effect, in coincidental things which happen simultaneously. For instance, and this is a real life fact... did you know ice cream sales rise and peak at the exact same time as the number of drownings rise and peak every year? This is an easy one to see through because... what possible correlation is there that could cause one of these two truths to effect the other? Of course, the answer is... there’s not. There is, however, the fact that the two are both symptoms of another truth... they are just not directly connected to each other. In this case, when the sun is hottest in summer, ice cream sales peak and so does the number of people who decide to go for a refreshing swim. Hence, both these figures rise. But you can see how just a few clever omissions in the way this data is expressed by an advertiser or newspaper that wants to sell papers can make it seem that there is a direct causal link here and the writers of this book also warn us of the dangers of this kind of advertising.

Another more alarming real life scenario demonstrating this phenomenon is the so called link between the MMR vaccinations for children and the belief that this causes autism. What’s really going on there is that the first signs of autism that you may be able to detect in a child happens at around the same time/age in which the majority of them are inoculated with the MMR vaccination. There’s no actual link but lots of people refuse them as a result of the belief that there is and they therefore put older people with certain medical conditions which render them unable to have the vaccination at risk for their lives.... which is kinda unacceptable but it’s what’s going on in the world, nevertheless.

And there’s a heck of a lot more interesting mind tricks examined in this tome with real world examples and the odd bit of advice as to how you can try and safeguard against some of them, even if it’s just a little bit. Unfortunately, being aware of something doesn’t necessarily make one less prone to it but there’s definitely a lot of food for thought in The Invisible Gorilla: And Other Ways Our Intuition Deceives Us which a lot of readers might care to dine on. This book is quite simply written and you won’t need to be a ‘jargon buster’ to understand the wealth of interesting ways the human brain is fooling us on a regular, day to day basis. Let’s be honest here, if somebody like me can make some sense out of the contents then it’s pretty much going to be easy to understand by anybody. So if you find yourself at a loose end for something entertaining and, in this case, a little bit practical too, then you could do a lot worse than track down this book and make yourself more aware of what’s going on inside your head... not to mention your confident co-workers and friends. Definitely a recommended read from me.
Posted by NUTS4R2 at 19:17