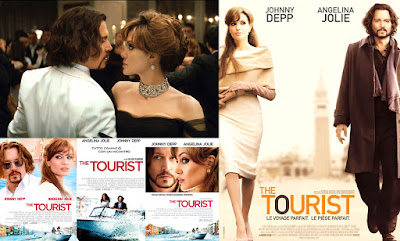 I got really annoyed when I missed this movie on its cinema release back in 2010. I’d seen the trailer for The Tourist about three weeks before it opened and the way it was cut together made it look just like a kind of modern remake of something like Alfred Hitchcock’s North By Northwest, with the lead actors Johnny Depp and Angelina Jolie standing in for Cary Grant and Eva Marie Saint. Alas, the movie only stayed for a week at the cinema and it coincided with a point in my life where I was obviously unable to free up the time to see it then. However, it never went out of my mind that I should get around to seeing this one day, despite the less than mixed and mostly negative reviews it got at the time.

Flash forward to late last year when I found a Blu Ray copy in my local Computer Exchange shop going for the princely sum of £1.50. I figured, with two such prestigious actors in it, I really ought to give it a go... especially at a price like this. Due to some technical difficulties at home, I ended up screening this on the same day I bought it and, I have to say, that the movie wasn’t what I was either hoping for, nor expecting.

The plot is, it has to be said, straight out of one of those old Hitchcock style thrillers, with Jolie being constantly watched by the police in case her lover, Alex, who escaped with millions of pounds belonging to a Russian mafia boss, tries to contact her. The catch is, since he’s had reconstructive surgery, neither she or the police no longer know what he looks like. If you’re sensing an end of movie twist coming this early on in the film, by the way, even from this quick summary... yeah, you’d be right. When he does send her a contact note, she is told by him to take a certain train and to pick up some guy of the same height and build to use to throw the police off their guard. However, the burnt letter used to contact her is reconstructed by the police, which is something he didn’t see coming. Or did he?

The police, led by Paul Bettany and his boss, Timothy Dalton,  are onto the fact that, when Angelina Jolie as Elise picks up Johnny Depp’s character Frank, he’s not the real deal. What nobody counts on, including Alex, is that the Russian mafia boss Reginald, played by Steven Berkoff, is also out to get Alex and, unlike the police, they believe this is the real Alex and they want their revenge... plus, you know, the money back. It’s down to Frank and Elise to charm and flirt their way around against all odds until the finale of the picture, in a twist so obvious you will see it coming from very early on in the film.

And the film is charming to an extent. The dialogue writing wouldn’t look out of place in those old 1950s romantic thrillers this movie is presumably trying so hard to invoke. Alas, the plot itself is a little too simplistic and, in all honestly, the pacing is far more sluggish than you might expect from one of these kinds of films. Also, some of the acting just seems a bit off, to be honest. Both Johnny Depp and Angelina Jolie both seem to be suffering from a distinct lack of chemistry with each other in this one which is odd, considering they’re usually both pretty amazing. Jolie is playing quite a sophisticated, intelligent femme fatale (with her own twist, as it happens) but her laid back approach to the line delivery in this seems to leave the performance just a little ‘flat’ in places. One also has to wonder just how super intelligent she is, by the way, when after being told to pick out someone of the same height and build as Alex, she manages to pick up Johnny Depp’s character when he’s not even standing up... so she is highly unlikely to know just how good a match he is, methinks.

Depp himself is oddly lacking the charisma one might associate with such a great acting legend. One wonders if he isn’t so into the idea of making his ‘mild mannered Maths teacher’ so different from Elise’s former lover that he is deliberately playing the character as a sort of ‘drab’ and uninteresting person. Either way, that’s how he seems to come across in this movie... which isn’t a good thing.

The other problem with this movie is that the there’s relatively little action in it. Sure, there’s a scene where Johnny Depp is running chaotically across rooftops, avoiding the bullets of the Russian mafia and, yes, there is a high speed boat chase through the canals of Venice at night but... these action sequences are both a bit far and few between and, ultimately, quite dull when compared to some of the stuff we have seen in various action thrillers over the last couple of decades. It all seems very lethargic and you would think a strong cast like this would deserve a little more imagination put into the writing and the way in which the film has been structured, to be honest.

James Newton Howard’s score is appropriate but not one of his best, as far as I’m concerned. I’d like to hear it away from the context of the movie (and I may well have a look at sourcing a cheap copy on CD at some point in the near future) but it’s ultimately very reflective of the type of movie that this film is trying to be... which is a shame because I think JNH has written some great scores in the past and he deserves a little more recognition but... yeah, I don’t think this one will do that.

And that’s about everything I’ve got to say about The Tourist  right now. The end twist is something which, as I’ve said, most audience members will see coming extremely early in the picture and, although there’s nothing really terrible about this movie, it’s not got anything remarkable going for it either, that’s for sure. I read somewhere that this had a very troubled pre-production history with various actors and directors dropping out at certain stages. I also read it was a very quick shoot and neither of these pieces of information surprise me, to be honest. The fact that people have had a tough time describing it as either a comedy, a thriller or something in between probably says it all about this brave but ultimately lacklustre movie. Not a film I could recommend to anybody but, I do appreciate the various people involved trying to cobble together a movie which focuses on old style glamour shenanigans, rather than some of the ‘played out’ stuff we’ve been seeing at the cinema just recently. The problem is, it just doesn’t work here and so, ultimately, it’s just a bit of a dull movie. Which is a great shame.
Posted by NUTS4R2 at 19:45