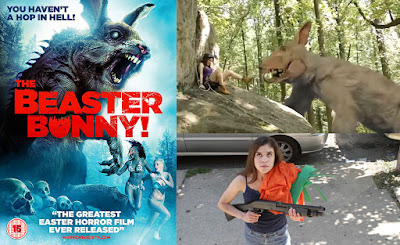 ‘Twas the week before Easter and though it was sunny, not a creature was stirring, not even this bunny... who was sitting here one night trying to figure out what the Easter movie review would be for the blog and, while browsing my twitter account, had one drop into my lap courtesy of @cyber_shep who was watching a film I’d never heard of called The Beaster Bunny. I looked at the trailer on youtube and saw that... wow, it was quite bad. Thoroughly cheap and silly and so, of course, being as these were excellent criteria for Easter watching, I headed on over to Amazon to see what the availability was on getting one before the holidays. As it happened, even though the English DVD had only been out a day or two, it had the one hallmark of quality that I tend to place a lot of trust in... namely, it was already only retailing for five pounds.

As it turns out, when it was released in the US, three years ago, it went under the title of Beaster Day: Here Comes Peter Cottonhell and I can only assume, without needing the benefit of the hindsight I now have, that the reason for the title change on this UK release is for the same reason that the name changing shenanigans often are on a lot of movies with a delayed overseas release... the reputation of the film was so bad they didn’t want to tip off any potential customers. Alternatively, The Beaster Bunny is a hell of a better title than the original so, you know, maybe it was due to art.

I had another strong recommendation via the packaging on discovering that the 15 rating the film carries in the UK is for, and I quote, “strong language, bloody violence, injury detail, nudity” and... well, after all, isn’t bloody violence and injury detail a lot of what the biblical origins of Easter are about, in some sense. Although, personally, I could do without strong language being thrown into the mix but, hey, I’m sure that’s just me. What I will say is that the glorious artwork on both the front and back covers of the box and slipcase, which bear very little relation to the content of the film housed within, are truly worth the price of purchase of this thing... which I now know is pretty much more than can be said for the actual movie itself, to be honest.

So, we have a terrible movie which is, obviously, quite intentionally terrible and the film is a mixture of good ideas, enthusiastic acting and some genuinely awful, almost cringeworthy scenarios which really aren’t my cup of tea, it turns out... and I say that even though I’m quite used to watching this kind of stuff.

The film tells the story of a failed acting student who returns to her small town and moves back in with her dad and his girlfriend. Given an ultimatum by her father, she applies and, against her best expectations, gets a job with the local dog catchers, where she has to put up with the attentions of the film’s comedy psycho dog catcher and figure out what’s killing the folk in the nearby forest. Of course, what is killing people, in quite gory fashion, is a 50 foot, man and woman eating rabbit... and so the film goes on without much plot and some okay ideas but with some fairly, it has to be said, tasteless humour and ofttimes mean spirited writing which didn’t exactly leave me in stitches.

This movie has all the hallmarks of being a deliberately ‘so bad it’s good’ film like those Grindhouse style, ‘ironic’ movies like Nude Nuns With Big Guns (reviewed here) and Hobo With A Shotgun (reviewed here) but, alas, it doesn’t ever quite get up to the level of those films and instead, kind of putters around doing the same kind of stuff all through the movie.

So... good stuff? Well the actors are wonderfully over the top in their portrayal of Hollywood stereotypes, although as I said, I wasn’t the biggest fan of the writing. I really didn’t enjoy the lead psycho character but the actor playing him... and the IMDB isn’t particularly helpful on this film but, I reckon it’s Peter Sullivan... well he turns in a great performance here. As does Marisol Custodia as the main female lead, Brenda.

Other good things are nice throwaway ideas like the name of the Dogcatcher company - Dog Catchers In The Rye - some truly stupid scenes of scantily or topless maidens being terrorised by the big bunny of the title and, quite frankly, the most ludicrously unconvincing, “this is a marionette puppet superimposed badly into the action” creature you’ve ever seen. This, of course, combined with the hefty  gore factor, gives it a truly great ‘stupid factor’ and you can’t help but smile at some of the shenanigans caught on film. They even have a corrupt mayor who won’t close down the upcoming, highly profitable Easter Weekend celebration event in the park just because of the ‘wild animals tearing people apart’ stories. Even the score by John Paul Fedele is serviceable and somewhat catchy.

The bad stuff... well pretty much everything else. This has got the worse CGI superimposition of objects combined on screen which even make the very earliest days of Ray Harryhausen look totally realistic in comparison (and I’m not knocking Harryhausen here people, I think he was a great man and contributed so much to the world of film... which I’ll hopefully get to cover properly at some point on this blog). Even stuff like a large, static clump of earth look totally unrealistic here.

Other annoying things include the fact that, although the comical deaths are quite gory, you never actually see them happening properly ‘in camera’. Usually you just see a quick cut, quite anticlimactically,  to the immediate aftermath which, once you realise that this is the MO for the entire picture, is less than satisfactory. This coupled with story elements like a giant Easter Bunny which seems to serve no purpose or place in the plot help, unfortunately, make this one of the worst ‘so bad it’s good’ movies I’ve seen in quite some time.

That being said, The Beaster Bunny is quite fun in places and, if you want to watch something which is absolutely silly for Easter then this could be a candidate for your movie watching adventures... although you might want to dull and confuse your senses with a little alcohol first or you might be in danger of not taking anything fun away from this movie at all. I’m actually quite glad I saw it, on some level and, like I said, the box artwork is truly awesome. Such a shame, then, that like a lot of things and people in this world, the cover is a lot more interesting than what’s on the inside.
Posted by NUTS4R2 at 14:48