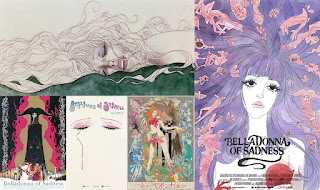 At The Mountains of Sadness

Belladonna of Sadness is a movie which had a general release in a few countries in the early 1970s and which is credited with contributing heavily, on its failure at the box office, to the demise of the studio that produced it. It wasn’t released in the US or, I believe, in the UK, until last year and I, myself, probably wouldn’t have heard of it if I hadn’t stumbled into a promo for the US Blu Ray release on Twitter a few months before it came out.

The film is an animated (kinda) feature length movie and is said to be the last in Yamamoto’s  Animerama trilogy although, since it stands alone without the other works, I suspect this is an ‘unofficial’ trilogy named such by over enthusiastic audiences... such as Sergio Leone’s A Fistful of Dollars, For A Few Dollars More and The Good, The Bad and The Ugly being named a trilogy when they actually aren’t or Dario Argento’s The Bird With The Crystal Plumage, Cat O’ Nine Tails and Four Flies On Grey Velvet being named his ‘animal’ trilogy, just because they have names of creatures in the titles.

Now I say it’s an animated feature but animated is a loose term when it comes to this movie which, for the most part, deals in static images which are then creatively panned over or zoomed in or out of for artistic effect with the odd moving part thrown in such as a creature’s eyes lighting up or a drawbridge on a castle pulling shut. That being said, there are some brief examples of proper animation thrown into various parts of the movie, such as the initial rape of the films main protagonist Jeanne, on the day she gets married to another character called Jean (both tragic figures) in which we see the path of her misfortunes as the leader of her village and his castle full of people take turns to defile her body and we see her loins and spine filling up with blood which tears through her.

The film is full of tragedy as various misfortunes are visited on Jeanne and Jean, with Jeanne most notably affected by the harsh knocks that life delivers her as she sleeps with the devil (voiced by legendary actor Tatsuya Nakadai) in various incarnations until, at some point over the years, she gives him her soul so she can become a vengeful and satanic witch to lead a revolt in her village.

There seems to be an abundance of sexuality and violence in the imagery throughout the entire length of the running time and, although this includes such clichés such as a vaginal flower opening up its petals, there are some interesting ideas showcased in an expressive manner here. Probably the most animated sequences in the movie are the montage sequences which crop up every now and again to move the narrative forward or make a point and there is definitely a feel that the director, although known for his animated work a long time prior to this, was perhaps a little inspired by The Beatles movie Yellow Submarine. Although the animation and drawing style look very different to that for the most part, there’s one particular montage sequence, where Jeanne finally gives her soul to Satan, that seems almost ripped out of Yellow Submarine in terms of the stylistic chaos which manifested in a somewhat more joyful manner in that particular work.

For the most part, the images and the way they are drawn are what makes this mostly watchable and it carries a very broad range in terms of the different kinds of imagery pitched against each other in the editing room. Some of it seems like boldly simplified caricature in nature while a lot of the erotic content seems almost like it is trying to be something Guido Crepax might have drawn for one of his Valentina strips. It’s almost like a fairy tale for adults in that the content of this particular movie is definitely not for kids but the visual language in which it is expressed is done so in the guise of childhood imagery. This imagery is ably supported by the score which, apart from the songs, is written by Masahiko Satô and it kind of alternates between a rather interesting, rocky and acidic version of something Vince Guaraldi might have supplied for a Charlie Brown cartoon and something which is, sometimes, a bit more wallpapery and easier to ignore.

In terms of story, the title of the tale is apt because it really is a portrait of tragedy and this is sometimes backed up with lyrics from some of the songs in the score. The lyrics help pour on the misery and help carry the message which seems to be a highly feminist one... which is strange because, truth be told, the film seems to be oddly misogynistic in where it chooses to focus its attention. That being said, there are some great lines and one, where the women and children are left behind in the village to look after it while the men-folk go off to war for a few years, is a really telling one in terms of its overall message... “Women are always the ones left behind to suffer.” However, despite this noble subtext, the final image of a strange point made about the French Revolution, which seems to have absolutely nothing to do with the content of the rest of the film (and which was, tellingly, not in the original release and added many years later for re-release in certain countries) seems to be an almost complete non-sequitur and leaves you hanging, in terms of being a fitting climax to the movie.

All in all, Belladonna of Sadness is innovative in places with some nice, expressive art and, at the very least, a consistency to the story in terms of the downward spiral of events it depicts (even with that strange ending). I have to say I found myself wandering a lot (or actually almost nodding off) as the film played out and it would be true to say it wasn’t successful in completely capturing my attention. I’m glad I saw it but I can’t, in all honesty, say I’d recommend it to a third party but, that being said, if you are into seeing beautiful artwork represented on screen then this definitely is a film which has it in abundance. Not particularly something I would watch again in a hurry but also not without interest. It has its moments.
Posted by NUTS4R2 at 19:00