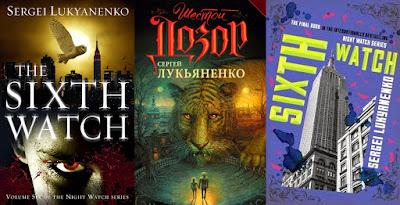 Six, By Her Hex

And so, finally, the sixth book of Lukyanenko’s famous Night Watch series is translated into English.

If you are not familiar with the Night Watch series then you may remember the large budget Russian blockbuster movies made last decade... Night Watch (2004) and Day Watch (2006). They were pretty well received films internationally and, personally, I think the second was a little better (at least in terms of being anywhere near the source material as an adaptation) but they were really so far away from the content and atmosphere of the original stories that, when you first start reading these things, you might feel you’ve got the wrong batch of books. They were cool films but the books, which are a million miles away from what director Timur Bekmambetov did with the movies, are so much better and more engaging than their cinematic equivalents.

The books, to date, are The Night Watch, The Day Watch, The Twilight Watch, The Last Watch, The New Watch (reviewed here) and this latest addition to the stories, The Sixth Watch. The stories follow the exploits of a group of light and dark wizards, vampires, witches and so forth who are working behind the scenes of our modern world and keeping the balance between good and evil. They’re mostly told in the first person by the main hero of the stories, Anton Gorodetsky, who starts off when we meet him as a lower grade ‘Other’ and who advances and gains power (and also gains a wife and daughter) as the novels progress. They’re a bit like Adam Hall’s Quiller books in style, with a little more humour as the stories progress and mixed up with the kind of wizardry one might expect from a J. K Rowling novel.

They are fairly gritty in nature, which I suspect might possibly be a trait of Russian literature... but also quite magical and witty. They're also very rewarding and the story arc of each novel doesn’t usually go quite to where you think it’s going to go. There’s usually a revelation or two about regular characters you think you already knew and, quite often, people you care about wind up either dead or forever changed in some way... and this one is certainly no different in that respect.

This latest tome in the series follows the pattern set about by the earlier novels to some degree, in that it’s split into three parts with various chapters comprising each section. Usually, though, each section tells a different short story... sometimes with shifting viewpoints but with the majority of the novels narrated first person by, as I said earlier, Anton Gorodetsky. Then, when you get to the end of the last part, it usually reveals itself as a binding part of an arc which the earlier sections have been leading up to as kind of puzzle pieces of the larger story and a more crucial ‘end game’. In this new one, however, the sections do not take the appearance of stand alone stories at all and I wonder why the writer chose to split this one into parts at all since each section carries on directly after the last one ended.

Indeed, the story which starts off the first chapter makes it clear that the various factions - The Night Watch, The Day Watch, The Inquisition and The Witches - must work together to try and defeat an impending threat which, in the usual high stakes stories by this author, would mean an end to both them and the rest of humanity on the planet. This kickstarts in two ways. Firstly, an unknown vampire is drinking blood from victims who are left alive rather than drained and Anton is given the case, which is kind of beneath him now since he is such a unique other... not to mention his even more powerful wife Svetlana and his completely unprecedented, powerful daughter Nadya. He quickly learns that this is because the initials of the names of the victims bitten in order are spelling out his name and giving him a warning. Is the vampire his enemy, though, or an ally? Meanwhile, all the 'prophetic others' in the world from all the various factions have a simultaneous prophecy about the return of a long forgotten being called ‘The Two In One’ and, as usual, the prophecy is buried in clue filled rhymes which Anton and the others have to try and solve... this one including talk about a Sixth Watch and the end of the world, due in just a few days time. And that’s the basic plot set up.

And it’s wonderfully written although, I was pretty sure I knew how this one was going to turn out. I’d just assumed that, at some point, someone would be smart enough to figure out that as long as the conditions of the prophecies were never met then nobody would have to worry about it reaching its ultimate conclusion and that, I figured, is why nobody in the Watches seems to know anything about The Two In One or The Sixth Watch from their archives. However, I’m pleased to say (in some sense) that I was wrong and the arc concludes quite differently.... with a certain amount of sacrifice which will certainly mean the books, if any more are written in the future, will be a completely different affair... at least from the starting point of any further adventures.

Now I’m not going to say much more about the content of this one except that a few significant characters who I thought I’d never see again make return appearances in this book... including The Tiger, who made so much trouble in The New Watch and who is seen as an ally of his human basis, Anton, here. So when The Tiger is involved, a creature born from the Twilight which is where all the sorcerers and shape-shifters draw their power, the reader know the dangers are very great indeed.

What I will say is the book is carrying on in the globe hopping tradition of the later tomes and it’s not all set in Russia, although the majority certainly is. It’s also a wonderful read, as usual and, while the end of this volume seems like it’s a dead end for the series... and may even be intended as such... I’m pretty sure that Sergei Lukyanenko could certainly whip up another one where a certain character’s fate is either reversed or improved upon should he so desire (so I’ve not given up on another cracking Night Watch adventure to come just yet, although I recently found out this one is being marketed as "the final" Night Watch book... we shall see).

And I don’t have too much else to say about The Sixth Watch other than that the first person style makes these books easy to slip into and the cynicism of the central character and his attitude to certain aspects of the fantastic elements which make up these stories ensure that the ideas are easy to access and, once in, you will probably be as agog as I was. To say that these books are page turners is a bit of an understatement, for sure. So for all fans of the series... don’t hesitate as it’s another great novel and it might, just might, be the concluding volume in the series. If you’ve never read one of these before... well, the characters do tend to progress and grow from novel to novel so you’d be much better off starting from scratch with The Night Watch and reading them in order. These are great books, though and fans of fantasy fiction shouldn’t let these go unread. I just wish somebody would do a set of TV miniseries’ and adapt them properly... they certainly deserve it.
Posted by NUTS4R2 at 19:15